A Plan B to Strengthen Biosafety and Biosecurity

A "minilateral" approach is needed to strengthen global biorisk management 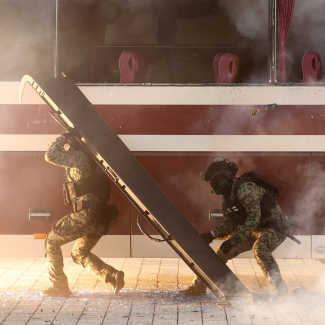 Opened for signature in 1972, the Biological and Toxin Weapons Convention (BWC) has proven to be remarkably durable. With its deliberately broad scope, the BWC continues to cover cutting-edge developments in genome editing and next-generation biotechnology that were far beyond the imagination of the diplomats who crafted the treaty. However, the mechanisms established to update the BWC are no longer fit for purpose. Countries committed to reducing the risks posed by the misuse of biology should explore alternative “minilateral” strategies for strengthening global biorisk management.

Russia's Invasion of Ukraine and the Upcoming BWC Review Conference

At the end of November, BWC member states will convene to review the treaty for the ninth time. In early 2022, prospects for strengthening the BWC were better than they had been for years. China, Russia, and the United States had articulated plans that, although different, reflected enough common ground to craft a workable compromise.

Unfortunately, Russia's invasion of Ukraine in February damaged the chances for a successful review conference. Russia's illegal aggression threatened the rules-based international order of which the BWC is a part. Russia then entangled the BWC in controversy by making spurious allegations that the United States and other NATO members are violating the treaty by developing biological weapons in Ukraine.

Russia failed to garner support for its allegations in UN Security Council meetings in March and May and a special BWC session in September. Russia then attempted to use the Security Council again to spread disinformation by invoking Article VI of the BWC in October. After the Security Council soundly defeated Russia's proposed resolution on November 2, Russia threatened to raise its discredited allegations again at the ninth review conference. Russia will likely be frustrated in its efforts to hijack the review conference to advance its disinformation campaign, and in retaliation, it will block the ninth review conference from reaching consensus and prevent BWC members from strengthening the treaty.

In these circumstances, concerned states should develop a plan B to strengthen international efforts to prevent the misuse of biology. A minilateral approach to international cooperation provides an alternative way to enhance global biorisk management.

The Problem of Spoiler States

BWC members review the treaty every five years. Given the scale, speed, and urgency of emerging biological threats, this five-year cycle is too long. BWC members need to make decisions on strengthening the treaty on a more regular basis.

However, even if held more frequently, BWC members still need to reach consensus on all decisions taken at review conferences. BWC members have often reached consensus through clever or obscure diplomatic formulations that paper over unresolved differences rather than by forging substantive compromises. Reaching consensus also consumes valuable meeting time that could be better spent discussing, for instance, advances in science and technology, compliance assessment, and confidence-building measures. The consensus requirement invites governments to use the BWC to fight other political battles, which shifts the focus from the treaty's purpose. In many ways, the need to achieve consensus too often produces demands for unanimity and lowest common dominator outcomes rather than creative compromises.

Past BWC review conferences provide evidence that consensus allows one country, or a small number of states, to act as a spoiler. In 2001, the United States unilaterally terminated negotiations on a compliance protocol. The 2006 review conference established an Implementation Support Unit (ISU) for the BWC, but thereafter efforts to strengthen the BWC stalled because of failure to achieve consensus. In 2011, Spain, Greece, and Portugal reneged on a promise to support expansion of the ISU; and Pakistan, Russia, India, Iran, and China blocked modest proposals to strengthen the treaty. In 2016, Iran’s last-minute objections prevented the review conference from adopting any substantive decisions.

BWC members review the treaty every five years, but given the scale, speed, and urgency of emerging biological threats, a five-year cycle is too long

The spoiler-state problem has affected other nonproliferation efforts as well. Pakistan prevented the UN Conference on Disarmament from working on any issue for ten years and continues to block negotiation of a fissile material cut-off treaty by that body. In August, Russia blocked the passage of a final document at the Nuclear Nonproliferation Treaty (NPT) review conference. Russia's reasons arose entirely from its invasion of Ukraine. It opposed language in the final document about its occupation of the nuclear power plant at Zaporizhzhya, and it was lashing out against countries that had shunned and sanctioned it for invading Ukraine. This episode is a preview of what might happen at the upcoming BWC review conference.

The BWC remains the foundation of the global regime on biological weapon disarmament and nonproliferation. But the five-year review cycle and the requirement to achieve consensus among 184 members amid escalating geopolitical challenges impede using the BWC as the primary platform for international efforts to strengthen biosafety, biosecurity, and oversight of dual-use research. Today's biological threats are too diverse, urgent, and complex to be held hostage by geopolitics and rigid diplomatic rules. We need more responsive ways to ensure that research and development in the life sciences are conducted safely, securely, and responsibly around the international community.

The world can supplement the BWC's traditional multilateralism with a minilateral approach. Minilateralism is a collective action strategy that brings together the smallest number of countries that can have the greatest impact on an issue. Comprehensive treaties supported by international organizations have been the gold standard for cooperation, but they can take many years to negotiate or amend. In contrast, minilateralism seeks to create a “coalition of the willing” with the capability and motivation to take substantive actions that multilateral institutions cannot or will not undertake because of political, legal, or resource constraints.

Such a coalition of dedicated countries can reach agreements on shared objectives more quickly and avoid spoiler states and lowest-common denominator outcomes. Minilateral initiatives can pursue many goals, including information-sharing, standard-setting, policy-coordination, and capacity-building. As progress is made, such initiatives can expand in scope and invite new members to join. Although states are central to minilateralism, the approach can interact with and supplement efforts involving treaties, international organizations, and nongovernmental actors.

Minilateralism and the Nonproliferation Regime

Minilateral initiatives are well-established in the nonproliferation domain. The Global Initiative to Combat Nuclear Terrorism, Proliferation Security Initiative, and Nuclear Security Summits enhance nuclear security and complement the International Atomic Energy Agency’s activities on preventing the proliferation of nuclear materials. Through the International Partnership Against Impunity for the Use of Chemical Weapons, countries coordinate to hold perpetrators of chemical attacks accountable, which bolsters the Chemical Weapons Convention (CWC) and efforts of the Organization for the Prohibition of Chemical Weapons to enforce the norm against using chemical weapons. Nonproliferation export control groups—such as the Australia Group, Missile Technology Control Regime, and Nuclear Suppliers Group—harmonize national export control regulations to ensure a level playing field for industry and to prevent proliferators from accessing controlled technology and materials.

Each of these minilateral initiatives started informally with a core group of states. Over time, membership grew, the range of activities expanded, and standards were raised. These minilateral groups have become enduring features of the nonproliferation regime despite the lack of international legal status or bureaucracy. These groups complement—rather than replace—multilateral regimes, such as the BWC, CWC, and NPT. These initiatives enable more ambitious countries to build a stronger nonproliferation regime.

Given its regulatory expertise, IEGBBR could take on the mission of auditing compliance with ISO 35001 using the peer-review model applied in the fields of nuclear safety and security and voluntarily trialed by some BWC members. IEGBBR could also contribute to the biosafety and biosecurity capacity-building programs funded by GHSA and the Global Partnership to help countries fix gaps and weaknesses in their biorisk management policies and practices identified by peer review. A coordinated approach to enhancing global biorisk management that harnesses these minilateral groups to promote adoption and implementation of ISO 35001 would have a powerful synergistic effect.

Coping with a More Dangerous and Complex Biorisk Landscape

Fifty years after it opened for signature, the BWC remains central to international efforts to “exclude completely the possibility of bacteriological (biological) agents and toxins being used as weapons.” In fulfilling this objective, however, BWC members are constrained by consensus decision-making in a harsh geopolitical climate as the life sciences transform in ways that increase biorisks. More countries are building high-containment laboratories, developing dual-use biotechnologies, and conducting risky research with pathogens. The dangers that an accidental or deliberate release of a pandemic-capable pathogen could cause mean that strengthening international oversight of high-risk life sciences is critical.

Given these stakes, the geopolitical constraints on multilateralism, and Russia's abuse of the BWC, a concerted effort to harness minilateral strategies offers the best chance to advance collective action on ensuring that life sciences research globally is conducted safely, securely, and responsibly. This effort can begin by fostering the widespread adoption and implementation of the ISO laboratory biorisk management standard, but minilateralism has the potential to take cooperation well beyond this first step too.

Gregory D. Koblentz is an associate professor and director of the Biodefense Graduate Program at George Mason University’s Schar School of Policy and Government and a member of the Scientists Working Group on Biological and Chemical Security at the Center for Arms Control and Non-Proliferation.


Filippa Lentzos is a reader (associate professor) and director of the MA in Science and International Security at King’s College London, UK.  She is also an associate senior researcher at the Stockholm International Peace Research Institute (Sweden), a non-resident scholar at the James Martin Center for Nonproliferation Studies (US), and a member of the WHO Health Security Interface technical advisory group.