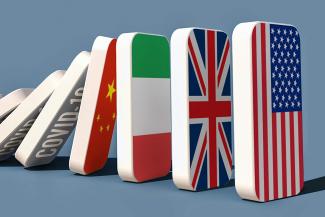 For many people, COVID-19 inflicts acute illness and chronic health challenges, giving rise to "long COVID." In Aftershocks: Pandemic Politics and the End of the Old International Order, (St. Martin's Press, 2021), Colin Kahl and Thomas Wright dissect the immediate impacts and long term consequences of the COVID-19 pandemic on domestic and international politics.

Aftershocks is an impressive political history of the COVID-19 pandemic to date. It weaves together insights from the 1918-19 influenza pandemic, extensive research on COVID-19's global consequences, and the authors' deep understanding of international politics. For Kahl and Wright, COVID-19 accelerated the end of the post-Cold War international order, magnified long-standing political problems within and among countries, and threatens efforts to create a new world order. Kahl and Wright sketch a strategy for U.S. foreign policy in the post-COVID era that involves preparing for future pandemics and "rallying the free world" against proliferating geopolitical and transnational threats.

A Virus Haunts Victory and Versailles

Kahl and Wright begin by analyzing how the influenza pandemic of 1918-19 affected the end of World War I, the agreements negotiated at Versailles, and interwar politics. The Great Influenza demonstrates that pandemics can "shape international order by undermining the material capabilities of key states and by producing contingent historical events… that ripple through time" by agitating "underlying forces between and within countries, straining economies, and worsening inequality and contributing to social and political unrest."

This look at the Great Influenza is interesting. Histories about World War I, what the Versailles talks produced, and the interwar period rarely, if ever, probe that pandemic. Kahl and Wright do not push the political impact of the influenza pandemic too far, but they argue that it mattered more than has been appreciated. The analysis also primes the reader to understand how the COVID-19 pandemic helped hasten the end of a different international order and burdens the making of a new one.

Too Many Political Spike Proteins

The coronavirus responsible for COVID-19 uses a spike protein to infect cells and cause illness. The second part of Aftershocks examines the political equivalents—geopolitical and domestic phenomena that infected and damaged international cooperation and contributed to the pandemic becoming a disaster.

This part begins with China's dishonesty about the Wuhan outbreak, its imposition of lockdowns, the silencing of dissent, and the country's efforts to turn the crisis into a geopolitical opportunity through donations of medical supplies, disinformation campaigns, and wolf-warrior diplomacy.

The book then chronicles the disastrous U.S. response and President Donald J. Trump's obsession with framing "COVID-19 as a China problem rather than a global public health crisis, a framing that would have major consequences for world politics." Kahl and Wright examine the European Union's difficulties addressing COVID-19 and the problems that nationalism—including in Brazil, India, and the UK—caused for pandemic responses. The authors explore how some countries in East Asia and Oceania (for example, Taiwan, South Korea, and New Zealand) initially succeeded in managing the pathogenic threat.

Rather than triggering the cooperation considered critical for effective pandemic responses, COVID-19 produced geopolitical and ideological competition between China and the United States, exposed the European Union as unprepared, and fueled nationalism around the world. The success that a few countries had flowed less from international cooperation than domestic actions based on "previous experience with crises and failure on disease" that triggered the "political process of reform."

No Distancing from Social Determinants

COVID-19 has exacerbated economic and social problems long associated with poor health, such as poverty and inequitable access to health care. In Part III, Kahl and Wright unpack the pandemic's impact on economic inequality among countries, economic vulnerabilities and social inequities within nations, armed conflict, democratic backsliding, authoritarian momentum, and protests and resistance against economic and social injustice and political repression. The exploration of this "new world disorder" is truly global, with attention paid to large-scale phenomena—globalization, refugee flows, food insecurity, and assaults on civil liberties—and developments within many countries, including Afghanistan, Bangladesh, Bolivia, Ethiopia, Iran, Kenya, Peru, Sri Lanka, and Yemen.

Part III contains more sobering insights about international cooperation. The damage the pandemic inflicted on social determinants of health highlights the fragility of gains made through international efforts prior to COVID-19. The economic measures that governments mounted to mitigate the economic and social disruption that the pandemic and lockdowns caused arose from "correlation not coordination" of national policies. The post-pandemic problems with social determinants of health confront an international system burdened by geopolitical and ideological competition, rising authoritarianism, struggling democracies, and persistent nationalism.

The book's final part focuses on the post-COVID world and begins by analyzing the difficult politics generated by the development of vaccines and the threat from variant strains. The vaccine story is not a tale of cooperation, solidarity, and equity. American, Chinese, and Russian vaccine efforts were not multilateral endeavors, and the development of vaccines by each country produced vaccine nationalism and geopolitical vaccine diplomacy rather than commitment to global, equitable access. The emergence of variants produced new waves of infections, more lockdowns, and growing anger about vaccine access.

With the problems of variants and vaccines hanging over the world, Kahl and Wright pivot toward what the United States should do. First, they recommend better pandemic preparedness, which should include re-establishing bipartisan agreement that pandemics pose a threat to the United States, reforming the World Health Organization, providing resources to help low-income countries recover from COVID-19, and creating "a new Global Alliance for Pandemic Preparedness (GAPP)."

Second, they argue that the pandemic's aftershocks require a new framework for U.S. foreign policy that facilitates responses to transnational threats in a context where great-power competition and nationalism constrain cooperation. The United States must "outcompete China and build greater resiliency against transnational threats." It can do so by reinvigorating the community of democracies and building "international cooperation outward from this core of states." This project would encompass the GAPP and action on other global challenges, including cybersecurity, the spread of authoritarianism, and climate change.

Pathological Politics and the Future of World Order

Time and again, Aftershocks hammers home how democratic and authoritarian states responded to COVID-19 in pathological ways—prioritizing competition and ideology over cooperation and science, pursuing beggar-thy-neighbor policies rather than collective action, blaming others over taking responsibility, spreading disinformation instead of creating shared truth, and mouthing platitudes about equity while watching death counts grow.

However, the most powerful drivers of this behavior—geopolitical and ideological competition internationally and nationalism and populism domestically—pre-date COVID-19 and, in many ways, have been made worse by this disaster. If, as Kahl and Wright suggest, better pandemic preparedness depends on how the United States competes geopolitically, then the aftershocks of the pandemic might fade in a U.S. foreign policy fixated on the balance of power.

The aftershocks of the pandemic might fade in a U.S. foreign policy fixated on the balance of power

This dynamic might be at play even before the pandemic is over. Given mounting concerns about the role of the United States in world affairs, The Economist is featuring essays by global thinkers , such as Henry Kissinger and Francis Fukuyama, on the future of American power. None of the ten commentaries published as of August 31 engages in any serious way with the pandemic—the most disruptive global event since World War II. Can we already sense that, as with the Great Influenza, pandemic aftershocks quickly become afterthoughts when the great powers confront the challenge of forging a new international order?