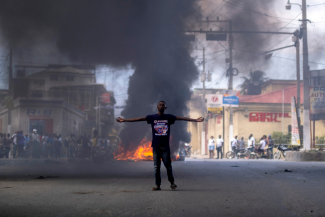 A man stands in front of a burning barricade during a protest against the assassination of Haitian President Jovenel Moise in Cap-Haitien, Haiti on July 22, 2021. REUTERS/Ricardo Arduengo
by Samantha Kiernan, Bayan Galal, Serena Tohme, Thomas J. Bollyky July 28, 2021

From Santiago to Hong Kong, Tehran to Khartoum, Algiers to New Delhi, millions of people took to the streets in 2019 to demand greater freedoms, government reforms, and other political changes. So great were the scale and diversity of demonstrations that 2019 came to be known as the "year of protests." Then COVID-19 struck. By the end of March 2020, more than one hundred countries had implemented lockdowns, with others restricting movement for some or all of their citizens. By April 2020, the number of global demonstrations fell to half of 2019 levels, sparking concern that the coronavirus pandemic and governments' responses to it would cripple resistance efforts and lead to further silencing of dissent. However, those predictions have not come to fruition.

Rather than incentivize or force people to stay home, COVID-19 has acted like lighter fluid

Rather than incentivize or force people to stay home, COVID-19 has acted like lighter fluid for countries where embers of discontent were already smoldering. One research group found that in 2020, demonstrations around the world actually increased by 7 percent—findings that were substantiated by the Carnegie Endowment and Civicus. In the early months of the pandemic, targeted protests against nonpharmaceutical interventions designed to stop transmission, such as lockdowns and mask mandates, spread like wildfire. Similar events continue to flare up today, such as recent protests in France and Greece against vaccine mandates. But as the pandemic has progressed and its secondary effects have intensified, particularly its economic and social tolls, the protest narrative has shifted.

No longer are demonstrations focused mostly on opposition to public health measures implemented to reduce coronavirus transmission. Instead, anger at failed or inadequate responses to the pandemic and its aftershocks are triggering larger social movements and unrest, amplifying preexisting concerns over corruption, unemployment, fragile health systems, and public sector mismanagement. These protests are challenging the fundamental stability and legitimacy of an increasing number of governments around the world.

Ongoing protests in four countries—Colombia, Cuba, Haiti, and Myanmar—illustrate how pandemic protests have changed and how COVID-19 is fueling regime-threatening resistance.

For two months, Colombia has been engulfed in protests of unprecedented scale and breadth against President Ivan Duque and his government. Initially instigated on April 28 by an unpopular tax reform proposal, the demonstrations quickly drew in both urban and rural citizens as daily COVID-19 cases reached a pandemic-high and media warned of imminent health-care system collapse. Under these conditions, protests soon morphed into larger movements against decades of inequality, police brutality, and the government's inadequate health and economic responses to the pandemic. Some protestors even called for to Duque to leave power. The government's violent response to the outcries and its failure to contain the country's worst wave of coronavirus—at the height of protests, Colombia was reporting more cases per capita than India—only further intensified discontent.

The fate of Colombia's protests and the Duque government remains uncertain. But in the instability created by demonstrations and the government's response, the threat of further escalation—by protestors, police, and non-state armed groups—looms.

On July 11, 2021, the largest protests in more than twenty-five years broke out across Cuba, with thousands demanding "patria y vida" (homeland and life)—a play on the Cuban communist slogan "patria o muerte" (homeland or death). Indeed, for many Cubans, both on the island and in the overseas diasporas, these protests are seen as a life and death matter. In 2020, Cuba's economy contracted 11 percent, strained by the pandemic and continued U.S. embargo. Accordingly, the island has been suffering food, currency, and medicine shortages, as well as power outages and a sharp drop in living standards. But in terms of protests, the straw that seems to have broken the camel's back is the island's sudden surge in COVID-19 cases.

Early in the pandemic, Cuba was a COVID success story, keeping total deaths below 200 in 2020 and even developing its own vaccines. But in June and July, the Delta variant tore through the island, shattering the regime's pandemic narrative and producing the highest per capita caseload in the Americas by mid-July. The decision to scorn foreign vaccines and aid in favor of self-sufficiency drew anger as hospitals filled, and the government had no immediate solutions. While only time will tell if these COVID-fueled protests are the beginning of the end for the Cuban government, they represent the greatest challenge to the regime and its legitimacy in recent history.

Haiti's current wave of unrest began in 2018, triggered when then-President Jovenel Moïse suddenly and dramatically raised gas prices. For the next two years, Haitians periodically took to the streets to oppose Moïse's government. Mass protests escalated in early 2021, when the president rejected claims his five-year term had ended. Initially directed at Moïse's refusal to abdicate, the protests, which were Haiti's largest in decades, soon came to encompass anger over the government's handling of COVID-19 and its failure to provide for and protect citizen's livelihoods during the pandemic.

Until recently, Haiti had scorned international vaccine assistance, citing concerns over AstraZeneca's safety. President Moïse had also disbanded his presidential coronavirus panel, eased masking and curfew restrictions, and welcomed mass celebrations. But a few months into the unrest, Haiti's cases began to rise sharply. Despite low official cases, Western news outlets reported that hospital facilities were full, oxygen was running low, and rising gang violence was preventing the sick from receiving care. Experts warned the country was at a breaking point, as COVID-19 and a constitutional crisis put the country on edge.

On July 7, President Moïse was assassinated, throwing Haiti into further disarray. The future of the country remains uncertain, but violent protests have already broken out in the north, with more expected as political turmoil fuels its health crisis.

"We are not scared of COVID, why should we fear the junta?" That chant filled the streets of Yangon, Myanmar, two weeks ago, as protestors continued nearly six months of demonstrations against the ruling junta.

On February 1, after suffering a major defeat in 2020 national elections, Myanmar's military removed from power State Counsellor Aung San Suu Kyi and her civilian government, effectively halting Myanmar's burgeoning transition to democracy. Over the next week, thousands of Burmese took to the streets in the nation’s largest demonstrations since the 2007–08 Saffron Revolution against the military dictatorship. To quell protests and demonstrations—many of which have been led by doctors—the military has occupied hospitals and other community centers, commandeered millions of vaccine donations from India and China, and most recently, ordered oxygen be denied to private clinics. The government has also disrupted supply chain lines, attacked doctors and medical workers, and pushed false COVID treatments.

Rather than force acquiescence, the junta's response has brought Myanmar's health-care system to the brink of collapse and hardened opposition to its rule. Its repression and resource mismanagement has also intensified the spread of COVID-19, leading to the country's gravest moment of the pandemic and worries it may become a "super-spreader" state. Given the harsh tactics used by the junta and the desperation of the populace, armed groups are replacing peaceful protestors, threatening to send the country spiraling into a protracted conflict.

The role of pandemics in spurring political protests is not new, especially in countries where the public already harbors political and economic grievances. In the nineteenth century, riots broke out in response to epidemics of cholera in cities across Eastern and Western Europe, Russia, and North and South America. In Europe and Russia, these riots occurred in conjunction with broader political upheavals in 1830–32 and 1848, often in urban areas characterized by grossly unsanitary conductions and enormous socioeconomic disparities. In Liverpool and New York, rioters attacked physicians and hospitals. In Naples, mobs stormed the offices of the national government over its incompetence in improving the city's sanitary conditions after years of false promises. In Hungary, peasants attacked castles and murdered nobles.

Leaders would do well to heed the lessons of history as they respond to COVID-19 and the slow pace of global vaccination. The Delta and Lambda variants of SARS-CoV-2 are tearing through Latin America, the Middle East, Southeast Asia, and Africa. Many countries in those same regions have dangerously low vaccination rates, with the lowest in Africa, where less than 2 percent of the population has been fully vaccinated. Under these conditions, the coronavirus has the potential to set off social and political instability in autocracies—such as Libya, Iraq, and Iran—and in more liberal democracies, such as Tunisia and South Africa.

The only guaranteed way to control COVID-19 protests is to control COVID-19 through vaccination. Donations of vaccines are increasing but remain slow and insufficient, and they are often not directed to the countries at greatest risk. Billions more doses are needed. The United States and its European allies ought to develop a clear plan to ensure accelerated production, targeted allocation—which takes into account the stability of recipient nations—and distribution of doses in collaboration with COVAX, the multilateral effort. These countries should also target financial, development, and in-kind aid, such as foodstuffs and personal protective equipment, to countries where the pandemic has fueled devastating economic tolls or triggered acute shortages. Failing to act, and act quickly, risks pandemic protests going viral.