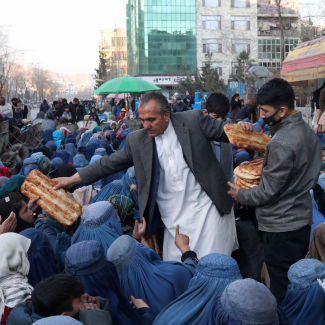 Mehr del Khan Rahmati, who is in charge of a bakery, distributes bread to people in need, in Kabul, Afghanistan, on January 31, 2022. REUTERS/Ali Khara REUTERS/Ali Khara
by Allison Daniel May 5, 2022

The lingering COVID-19 pandemic, climate change, and conflict have caused an extraordinary surge in the number of people around the world experiencing hunger and malnutrition, obstructing decades of efforts aimed at reaching global targets. Governments and organizations are now scrambling to assist millions of people experiencing acute food insecurity who need urgent action. Complicating these challenges are global food prices, which are climbing sharply right now.

COVID, climate change, and conflict have caused an extraordinary surge in the number of people around the world experiencing hunger and malnutrition

It is difficult to be hopeful, but there is reason for cautious optimism. National governments, UN agencies, NGOs, and donors made sizable financial and political commitments at the Tokyo Nutrition for Growth Summit in December 2021, committing more than $27 billion over the next few years to tackle hunger and malnutrition.

Malnutrition contributes to an estimated 45 percent of child deaths globally. More than 45 million children were already suffering from a serious type of malnutrition, known as wasting (low weight relative to height), before the pandemic. Of these, 13.6 million children had severe wasting, pushing them to a ten-fold higher chance of dying compared to healthy children. In surviving children, deficits remain for years to come, and include an increased risk of noncommunicable diseases in adulthood.

At a higher level, malnutrition in all its forms has consequences for countries' economies and development. For this reason, one of the 17 Sustainable Development Goals (SDGs), which are global goals for international development, is to reach "Zero Hunger" by 2030 with Global Nutrition Targets on wasting, stunting, maternal anemia, breastfeeding, and more to be attained in 2025 to achieve this. Collectively, countries were not on track to meet these goals even before the pandemic.

The Standing Together for Nutrition consortium predicted in July 2020 that the COVID-19 pandemic would cause a 30 percent drop in coverage of essential nutrition services and an ensuing 14 percent spike in wasting—which authors said were conservative estimates.

While it has been challenging to precisely estimate the incidence of malnutrition, the most recent State of Food Security and Nutrition in the World report calculated that in 2020, 720 to 811 million people were hungry and 2.37 billion people did not have adequate food access. Ninety percent of countries also reported at least one disruption to essential health services in this time.

Food supply chain issues have further intensified the problems related to hunger. Russia and Ukraine supply over half of North Africa and the Middle East's cereal needs and significant amounts of wheat and barley. The invasion of Ukraine is expected to cause global food prices—which were already at an all-time high in February, according to the Food and Agriculture Organization of the United Nations (FAO)—to rise steeply. This undoubtedly exacerbates food insecurity and impairs provision of food aid in nations that need it now, many of which are facing conflict in their own borders.

There are ten countries classified as having alarming or extremely alarming Global Hunger Index (GHI) scores, eight of which are affected by conflict. GHI scores are based on four indicators, including undernourishment, child wasting, child stunting (low height relative to age), and child deaths. The scale is from 0 to 100, with higher scores indicating worse hunger levels.

While the GHI indicates hunger over recent years, the 2021 Global Report on Food Crises indicates which countries are on highest alert due to acute food insecurity based on the Integrated Food Security Phase Classification (IPC). IPC Phase 3 or above indicates that people are in crisis or worse, requiring urgent action to prevent serious consequences, including widespread death and total collapse of livelihoods in IPC Phase 5. According to the report, the most notable food crises are ongoing in the Democratic Republic of the Congo, Ethiopia, Nigeria, Yemen, and Sudan.

In 2020, the year that the UN World Food Programme (WFP) won the Nobel Peace Prize, the organization assisted 115.5 million people—the most they had reached in the previous decade. WFP announced in April that it needs $18.9 billion to reach 137 million people in 2022. South Sudan, Yemen, and the northern areas of Ethiopia and Nigeria are current priority countries. But WFP is expected to raise under half of the target amount. And last month, Tigray, northern Ethiopia faced a record-low amount of food distribution since March 2021. In Yemen, WFP has been giving half of the daily minimum ration to 8 million people dependent on food assistance since January.

Investments to Mitigate Malnutrition and Hunger

The situation is getting worse by the day, taking its greatest toll on people enduring poverty and persistent inequities, hence the desperate calls for action including from the Food and Agriculture Organization of the United Nations (FAO). But beyond immediate support, major investments need to be made to prevent and treat hunger and malnutrition.

Previously, the World Bank estimated that $70 billion more—or $10 per child annually in addition to current spending—was needed over a decade to achieve the Global Nutrition Targets by 2025. This included treating severe wasting which would cost $9.1 billion in this timeframe. Every dollar invested in this treatment was expected to yield an estimated $4 in economic benefits. The economic return for investing in breastfeeding would be even more—up to $35 per dollar spent.

The Tokyo Nutrition for Growth Summit was centered on universal health coverage to improve nutrition outcomes, transform food systems, and increase resilience in conflict-affected areas. At the Summit, governments and donors pledged $27 billion, with one of the biggest promises being $11 billion from USAID for the next three years. These funds from USAID will support efforts to prevent and treat childhood malnutrition and fund large-scale food fortification programs.

UNICEF also launched a Nutrition Match Fund in 2021, with donors agreeing to a 1:1 match for every dollar (or equivalent) that a country invests toward efforts to end child wasting. One of the reasons for this model is for funding to be shifted away from humanitarian budgets, with incentives for countries that have high rates of malnutrition to allocate funds from their own budgets to address it. This includes provision of ready-to-use therapeutic foods for severe wasting, which is recommended as part of a package of critically needed care in many contexts.

The Global Action Plan on Child Wasting, commissioned in 2019 to boost efforts to drop wasting prevalence to under 5 percent by 2025 and under 3 percent by 2030, has also supported countries' commitments to achieve nutrition targets. There are 23 countries with detailed plans linked to funds to reach these outcomes—and ten of these countries include those with top ten GHI scores and/or with the top ten largest food crises as depicted in the earlier table. For example, Yemen has earmarked an incredible $972 million  annually to reduce low birthweight, increase coverage of universal health care, improve exclusive breastfeeding, and treat more children suffering from wasting.

These financial, programmatic, and political investments are clearly needed to confront worst-case scenarios that millions of families are tragically bearing today. But will they be enough to fast-track—and sustain—progress on hunger and malnutrition amid so many crises?

AUTHOR'S NOTE & DISCLAIMER: Allison Daniel is a consultant for the World Health Organization, specifically involved in the guideline on prevention and treatment of wasting, but the views in this article do not necessarily reflect those of WHO.

Food Fight: Fighting for Healthier Food is a Life-or-Death Struggle