Go to homepage
Injuries: A Leading Killer of Youth in Lebanon
Urbanization 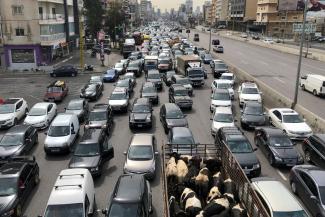 Vehicles are stuck in a traffic jam on a highway in Jal el-Dib, Lebanon, on March 9, 2021. REUTERS/Issam Abdallah
by Samar Al-Hajj and Ali H. Mokdad February 10, 2022

"It's contrary to human law to bury your own child," a mother told me (S. Al-Hajj). "My son was supposed to bury me."

Her 18-year-old son died in a car crash on prom night in Beirut, Lebanon.

Young people dying in tragic road crashes like this is all too common in Lebanon. According to reports from the Lebanese Internal Security Forces, more than half of those who die on the road are people in the prime of their lives, between the ages 15 and 44. For people in this age group who are injured on the road but survive, nearly one out of five lives with a permanent disability.

It's contrary to human law to bury your own child

Road traffic injuries impose major strains on the limited resources of the Lebanese health-care system, and rehabilitation services do not exist to help people recover after being injured in a crash. One local study underscored the magnitude of the road injury problem among young children under age 5, showing children in this age group are more likely to die from road injuries compared to older children in Lebanon.

Almost two out of three road traffic deaths among children occur while they are walking. Children who are refugees are particularly at risk of dying on the road as pedestrians. They also have double the risk of dying from a road traffic injury compared to local children, as children who are refugees are more likely to work in hazardous jobs, such as selling products on the street, or laboring in agricultural fields next to major highways. Living in informal, overcrowded settlements also exacerbates the risk of being injured on the road. In addition, they are more likely to experience long-term disability or die from a road crash due to limited access to health-care services.

In Lebanon, the large burden of road traffic injuries is only part of the whole picture of injuries, which are driven up by the country's constant political instability and violence. Decades of exposure to war, sociopolitical instability, economic crises, and regional conflicts have contributed to high rates of injury among the Lebanese people. Moreover, a recent man-made disaster—an explosion of ammonium nitrate in a Beirut warehouse in 2020—resulted in more than 6,000 injuries and deaths. Political instability has led to street demonstrations and riots, which in turn have given rise to clashes between protestors and local police. This heightened political climate has caused a surge of injured youths who have suffered from a range of medical issues, from lacerations to severe traumatic brain injury to death. Other countries in the Eastern Mediterranean region have witnessed similar youth injury patterns due to enduring economic crises and protracted political instability. Leadership in Lebanon and the region needs to address the state of injuries among youth occurring from the unrest, wars, and disasters, while simultaneously protecting the young from road injuries.

Public education and awareness programs that aim to increase knowledge, perceptions, and practices can encourage more people to use seat belts and helmets. To mitigate the burden of youth injury and death on the roads, Lebanon needs to revise its 2012 road traffic laws (law number 243) and safety regulations. Policymakers should advocate for this legislation to save lives. And the authorities need to deter violations of road traffic safety laws by strongly enforcing them, even during the hard times that Lebanon is facing amid one of the deepest financial crises in centuries. Ignoring the road injury problem will have a ripple effect on the nation’s health and economic prosperity.

EDITOR'S NOTE: Professor Ali H. Mokdad is employed by the University of Washington's Institute for Health Metrics and Evaluation (IHME), which leads the Global Burden of Disease study described in this article. IHME collaborates with the Council on Foreign Relations on Think Global Health. All statements and views expressed in this article are solely those of the individual author and are not necessarily shared by their institution.

Samar Al-Hajj is an assistant research professor on the faculty of health sciences at the American University of Beirut (AUB). She is the director of the NIH-funded MENA Program on Advanced Injury Research (MENA-PAIR) at AUB, aiming to strengthen injury research and generate evidence to raise awareness, transform attitudes, and reduce injuries in Lebanon and the Middle Eastern Region.

Interview with Walid Ammar, head of Lebanon's Ministry of Public Health, on testing, funding, and the threat to refugees

How violence, neglect, and health are entangled in urban territories