How violence, neglect, and health are entangled in urban territories 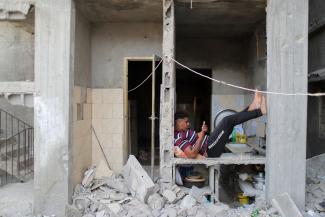 A young man uses his phone as he sits amid the rubble of a house that was destroyed in Israeli air strikes during Israeli-Palestinian fighting, in Gaza, on June 9, 2021. REUTERS/Mohammed Salem
by Haim Yacobi November 15, 2021

"The families prioritize purchasing bread and fundamental items not sterilization materials… our children are playing with each other outside and not follow the self-isolation procedures… if the corona spread will kill a lot of people as we go out, as our houses is narrow […] as you know that I live at refugee camp and can't bear to be home all the time." (Sami, April 2, 2020)

With the above words, Sami, a 30-year-old Gaza resident, opened an interview we conducted with him as part of a research project aiming to explore how violence and health are entangled in conflict zones in general, and in Gaza in particular. The project documented and critically analyzed the effect of infrastructure demolition on health in Gaza, especially in relation to access to health services, access to nutrition, access to water, and their effects on health in Gaza. We examined emerging alternative forms of resilience in relation to health among Gaza inhabitants.

As colleagues and I elaborated in 2020, the health system in Gaza—even before the outbreak of COVID-19—was not able to cope with the needs of the almost two million people living in the Strip. In less than six years, Gaza has experienced three devastating wars, which not only inflicted human losses (3,808) and left thousands injured and displaced, but which also targeted essential infrastructures, including Gaza's sole power plant, sewage facilities, hospitals, schools, factories, agricultural farms, and local industries.

Though the case of Gaza is an extreme example of a territory which is the subject of ongoing violence, destruction, and neglect, it also—I would provocatively argue—characterizes the situation in many other cities (though to a different degree) where a systematic and unjust distribution of social, economic, and environmental conditions severely affects the health of communities. Indeed, as we are witnessing, the pandemic is preying on pre-existing conditions that cause health disparities in all parts of the world, and hence the "COVID-19 global crisis" must be understood within the political and economic context that produces urban inequalities. This includes the lack of the provision of infrastructure such as water and sanitation, the deficiency of housing, and in the privatization of health services which has created "medical apartheid" between regions and within cities. Consequently, the current global pandemic crisis is an opportunity to critically revisit our urban policies and to question planning. Beyond the growing informal urban sprawl (mainly in low-income countries) the last few decades are also characterized by the domination of private (capital) interests versus common good in cities and privatization (of space, services, and infrastructure) versus the provision of means of collective consumption.

In parallel to the emerging social diversity in cities, we were also witnessing a growing social inequality, hyper-segregation, poverty, and homelessness, accompanied by policy driven commodification of urban spaces. All of these are expressed, for instance, in a current project I am involved with in Addis Ababa, Ethiopia, where residents of informal neighborhoods are not only more exposed to health risks including COVID, but also more vulnerable to the disease because they have limited means to tackle the illness if they get sick. The lack of public spaces and green infrastructure in informal areas of the city also means that the impact of lockdown on mental health may be comparatively higher there, as evidenced by case studies in Kenya, Nigeria, and Pakistan. Indeed, the current COVID-19 reality has exposed such social gaps. It did not create them, it uncovered the weakness of this form of urbanization and  it disproportionately harms vulnerable individuals and communities including Black communities, the poor, and indigenous communities.

The accelerated urbanization process in recent decades and the fact that most of the world's population lives in urban territories, requires long-term consideration and thought about the wellbeing of city residents—not just during a health crisis. This is significant because social and economic gaps are widening within and between cities, and questions of environmental and social justice are shaping the everyday lives of urban dwellers. It is now clear that premature deaths and diseases resulting from poor environmental conditions are disproportionately concentrated in areas where residents of specific ethnic and racial groups are concentrated. In recent decades, there have also been voices in research and practice (planning, public policy, public health) that emphasize the need to move from an exclusive clinical approach to health to a broad understanding that encompasses social and spatial aspects of the city that affect public health.

With reference to the above, urban planning and urban design in defining land use, housing design and open spaces design, and outlining transport and mobility impact the health of urban populations. Looking at the health of urban dwellers beyond the biomedical gaze is also noted by the World Health Organization's (WHO) definition of the Social Determinants of Health as central to their positive and negative impact on public health, including housing, transportation, open spaces, education, employment, access to food, income level, social inclusion, and health services. All these elements are shaped by public policy and planning and address a variety of causes and contexts that shape everyday life in the city that include broader aspects of justice and equality in health. The WHO's line of argument should be radicalized, as recently stated by Richard Horton, suggesting that COVID is not a pandemic but rather syndemic—the assembling of conditions, their interaction at the biological, social, and psychological level, and how they are shaped by social and political factors. Inspired by Horton, I would suggest understanding the current urban conditions as "syndemic urbanism" and hence adopt a different orientation to public health by developing an integrated approach—one that is both political and proactive—for treating health disparities as a public concern rather than the treating of individual patients. Syndemic urbanism, as elaborated in current research, focuses on how urban-spatial elements influence the development of several health conditions and how these are experienced in an urban context.

While returning to the "new normal" we should work toward the flattening of the already existing curve of spatial injustice in cities, since what we can see in the last year and a half is that the effect of COVID-19 varies depending on the strength of a community's welfare system including health, education, and housing. The response to the aggressive neoliberal policies of the last decades is to develop urban planning that will ensure better accessibility, better quality and diversity of housing, open spaces, infrastructure, and services. This is the time to think about urban health justice as a proactive field, a political sphere seeking to contribute to the wellbeing of urban dwellers. What we do know is that social justice and solidarity affects our ability to cope with the pandemic. If social solidarity and collective responsibility form the basis for a new civil contract—which prioritizes social justice rather than social fragmentation, planning of public spaces and infrastructure as public goods rather than commodities, and healing our welfare services—it is clear to me that we can overcome the current crisis.