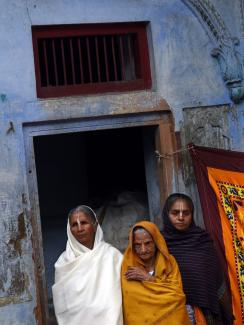 Widows are seen in front of an ashram in Vindravan, India, on March 3, 2015. Almost 2,000 of the estimated 34 million widows currently living in India live in Vindravan. Robert Schmidt/AFP via Getty Images
by Meera Khanna August 31, 2021

Before COVID-19, Reena Ahuja* and her husband enjoyed a comfortable, upper-middle-class life in Delhi. A homemaker, Reena cared for her family, including her sons and daughters-in-law, who lived with them in their sprawling home. Like so many in India and around the world, last year Reena's husband contracted coronavirus, and died less than a week later. Instead of consoling their grieving mother, Reena's sons accused her of being responsible for their father's death, and evicted her from her own home on the pretext that she could be a carrier of the virus. This was despite the fact that Indian law recognizes a woman's right to live in the marital property, even as a widow.

While losing a spouse can be destabilizing, it has been dangerous for thousands of Indian women who have lost their husbands to COVID-19. Without a financial plan, Reena's husband left her vulnerable to a patriarchal society that stigmatizes widows and refuses them their rightful inheritance. Destitute and isolated, COVID widows like Reena are often subjected to horrific acts of physical and sexual violence, sometimes at the hands of their own family members. As the death toll from India's second wave unfolds, an inevitable third wave threatens to ruin the lives of more women who will suffer their own consequences, beyond the already devastating loss of their loved ones.

I have witnessed these human rights violations firsthand. Despite some protections for widows under Indian law, cultural norms still allow such discrimination and violence to occur throughout the country. The Supreme Court of India in 2017 accepted recommendations from the expert committee on widows, but many lack the resources and knowledge to fight for their rights. Impoverished widows may be forced into marriages with their late husband's male relatives, as if they were inherited property. Some lose their children without understanding how to navigate the courts to fight for custody. With more than 32 million COVID-19 cases  438,000 deaths so far in India, the tragedy for Indian women continues to grow.

For years, frontline activists have campaigned for local laws and effective implementation that prohibit such violence, but more is needed. Regardless of their place of residence, caste, ethnic group or religious community, these women and girls deserve protection from their own government, as well as international law to provide overarching accountability. Protection of widows should be part of a global treaty to stop violence against women and girls.

Supported by 1,700 women's rights advocates from 843 organizations in 128 countries, the Every Woman Treaty calls for a global standard on ending violence against women and girls, including the harmful practices imposed on widows, so they can get the resources they need to sustain their families and rebuild their lives. A treaty would uphold and facilitate implementation of widows' right of inheritance and the right to start new lives through accessible job training, business loans, and scholarships for their children's education. Funding spurred by the global agreement would create new services for survivors, ensuring access to health care, mental health counseling, and safe shelters.

According to UN Women, one in ten widows around the world lives in extreme poverty

India is not the only country where violence against widows is a problem. In neighboring Nepal, the remarriage of a widowed woman is taboo. Accordingly, these single women are left behind, cut off from family—both emotionally and financially—at the time of their husband's death. In Nigeria, until recently, newly widowed women were forced to drink the water used to bathe their deceased husband's body, and lie next to them while mourning. While these practices have stopped, thanks to state and national laws, cultural practices like disinheritance remain.

According to UN Women, one in ten widows around the world lives in extreme poverty. Societal discrimination and exploitation relegate these vulnerable women and girls to a life of economic insecurity. Behavioral codes in some cultures restrict a widow's mobility, barring her from access to job training or the ability to find work. Children of widows, and child widows of forced marriages, are withdrawn from school, leaving them at risk of abuse and feeding the intergenerational cycle of poverty and sexual violence.

Research shows that global treaties change cultural norms. By legally binding its signatories, this powerful tool would hold nations accountable. A comprehensive, international agreement would bolster local and national policies and resources to end this violence and restore the right to a dignified life for widows across the globe. Critical funding, training and accountability measures for police, medical professionals, and judges would create a meaningful pathway for justice. Violence prevention education for men and boys would help put an end to the cycle of violence.

Once the global community defeats COVID-19 and the world has moved on, we must not forget those left in its wake. We owe it to our mothers and daughters to put an end to the violence against widows.