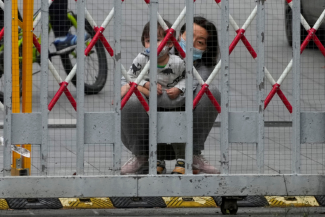 A resident and a child behind barriers at a closed residential area during COVID-19 lockdown in Shanghai, China, on May 10, 2022. REUTERS/Aly Song
by Eric A. Friedman, Chelsea Clinton, Lawrence O. Gostin January 5, 2023

As the three-year anniversary of the COVID-19 pandemic approaches, it's a moment to reflect on the untold human suffering. It's not only the millions of lives lost, but also the vast deprivations of freedom, the noxious discrimination, and the erosion of democratic norms and ideals.

As we and our colleagues discuss in a recent article in The Lancet, human rights violations marked every aspect of the COVID-19 response, beginning with its origins in Wuhan, where dissenters were silenced and data concealed, through to China's only recently ended zero COVID strategy, enforced through intrusive surveillance and coercive restrictions that led to denial of medical care and sufficient food. In many places around the world, governments abused emergency powers, used COVID-19 as an excuse to clamp down on political protests and delay elections, and abused COVID-19 mandates to detain and arrest marginalized populations, including migrant workers in India and returning refugees in Venezuela.

Human rights violations marked every aspect of the COVID-19 response

Between the pandemic's origins and today, human rights violations have indeed spanned the globe and extended across the full range of rights. Most fall into two categories: One is the large-scale violation of civil and political rights; the other has been the deeply unequal, discriminatory impacts of COVID-19, most glaringly "vaccine apartheid" that protected most in the United States and Europe, but left so many behind in low-income countries around the world.

COVID-19 and repressive governments proved a toxic mix for civil and political rights. Countries including China, Egypt, Russia, Venezuela, Madagascar, and Bangladesh threatened and jailed truth tellers, targeting health workers and journalists, violating not only their right to freedom of expression and freedom of the press, but also the public's right to accurate scientific information. The Chinese government targeted activists by manipulating its COVID-19 app to tightly monitor and restrict their movement.

Some of the worst human rights violations during the pandemic came not from governments abusing their authority, but from their failure to mitigate the consequences of discrimination already baked into health systems and other institutions. One U.S. statistic tells the global story of COVID-19's harshest impact on marginalized populations: the overall U.S. life expectancy for Americans fell 2.7 years during 2020 and 2021, but plummeted 6.6 years for Native Americans, leaving their life expectancy at 65.2, a level last seen in the U.S. population in 1944.

The unequal impact of COVID-19 on disadvantaged and marginalized communities is not uniquely American. Indigenous populations suffered disproportionately elsewhere, including in Brazil, where Indigenous Brazilians were four times more likely than white Brazilians to become infected during COVID-19's first wave. Somalis in Norway and Sweden, Black and other ethnic minorities in the United Kingdom, Asian migrant workers in Saudi Arabia and migrant workers in Singapore—all were among the marginalized groups who suffered outsized impacts of disease and death. In many places, migrants, particularly those without documentation, experienced other COVID-19-related discrimination, often denied participation in social protection programs. Asylum seekers were often blocked entirely or expelled without their claims being heard. Other populations too, including people with disabilities, suffered disproportionately.

COVID-19 may be best remembered for another form of inequity—the yawning gap between people living in wealthier countries and people living in poorer countries. It is a story that is now all too familiar. It began with the initial scramble for test kits, personal protective equipment, and ventilators, followed by wealthier countries buying up much of the world's initial vaccine supply. For example, in June 2021, when one-third of people in high-income countries were fully vaccinated, only 0.2 percent of people in low-income countries were. The COVAX Facility, meant to ensure substantial levels of vaccination in lower-income countries, was undermined by both a lack of international funding and early bilateral deals between wealthier countries and vaccine manufacturers. Today, these inequities continue to manifest through unequal access to antiviral treatments like Paxlovid.

Failures in international cooperation extended to mitigating COVID-19's broader socioeconomic fallout, which undermined a range of rights for poorer and marginalized populations, including an adequate standard of living, adequate nutrition, and education. It precipitated tens of millions of people being pushed into extreme poverty. It merged with the climate crisis and conflict to increase the number of people suffering globally from acute hunger by more than 200 million people. More than 460 million children could not access remote learning, disproportionately in sub-Saharan Africa and among lower-income households across the globe.

Many populist leaders conveyed messages and adopted policies at odds with science. Leaders in Brazil, Mexico, Venezuela, Madagascar, and the United States (under the Trump administration) opposed vaccine and mask mandates, while touting unproven treatments such as ivermectin. Tanzania's president asserted that only prayer could cure COVID-19.

Governments are now mobilizing to prevent and prepare for future health emergencies, with a new global treaty and systems for pandemic prevention, preparedness, response, and recovery at the core of these efforts. They must do no less for the human rights emergencies that can intensify and accompany health emergencies. Governments should dedicate themselves in the months and years ahead to reinforcing national and global human rights architecture, using processes that include robust civil society participation. This architecture will need new international law, mechanisms, and funding streams, all of which must thoroughly integrate human rights—as should ongoing efforts to address future public health emergencies.

At their core, human rights are about human dignity. The plethora of human rights violations that have pervaded and exacerbated the COVID-19 pandemic have done a great disservice to equal human dignity and shared human security. It need not be this way during the next pandemic—or during the persisting health emergency of vast health inequities. COVID-19 should be a wake-up call on the urgency of developing new law, funding, mechanisms, and standards that center equity, inclusion, and accountability and bring us nearer to realizing the promise of the right to health and other human rights.

It is for us—and our governments—to now honor the lives of everyone harmed by these violations by undertaking the transformative reforms of the global health and human rights architecture, and catalyzing transformations nationally to reinforce human rights and reassert equal human dignity.

Eric Friedman is a global health justice scholar in the O'Neill Institute for National and Global Health Law at Georgetown University Law Center.


Chelsea Clinton is the vice chair of the Clinton Foundation and an adjunct professor at Columbia Mailman School of Public Health.

The Devastating Impact of COVID-19 on Democracy