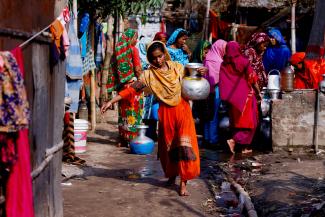 A woman carries a water jar after collecting water from a common tap, in Dhaka, Bangladesh, February 21, 2022. REUTERS/Mohammad Ponir Hossain
by Marilyn Waring May 11, 2022

When considering what the largest sector of the economy could be, many people assume it's energy, armaments, financial services, or even transport. But, in fact, the largest portion of the global economy is unpaid work—work that's disproportionately done by women, and often disregarded in official statistics. The omission of unpaid work reflects the current practice of gross domestic product (GDP) calculation, which has resulted in enormous health and socio-economic inequities, environmental degradation, and growth without improving the well-being of the most vulnerable.

To achieve "health for all"—when health is within the reach of every person—there should be an alternative metric to GDP that accounts for women's unpaid work and ensures resources are distributed to all people and the planet.

When assigned a market value, unpaid childcare becomes Australia's largest industry at 20 percent of the economy

Time-use data offers a solution to the grossly understated market estimates of what people do. Pregnancy, childbirth, and lactation are at the center of health for all, but since human reproduction is traditionally women's work, it isn't included in GDP.

In Australia, an infant adds 44 hours a week to a woman's unpaid workload, with breastfeeding alone taking 8 to 16 hours per week (providing good nutrition is essential for ensuring future health). When assigned a market value, unpaid childcare becomes Australia's largest industry (about 20 percent of the Australian economy), followed by all other unpaid work (almost 8 percent), and together these industries are four times the value of the financial and insurance services sector.

In Moldova, the value of unpaid household work represented 44 percent of GDP in 2014

But these GDP-derived market values underestimate simultaneous work activities, use proxy wage values that mimic the gender pay gap, ignore "worry work" (which includes the organization, management, logistics, and administration of running a household), reduce the complexity of tasks that women do as unpaid "household" or "care" work, and obscure significant fishing, agriculture, conservation, and manufacturing work performed by many women in rural areas. These estimates are often missing in data from low-income countries, where home production and subsistence agriculture are vital for survival and comprise a large portion of the economy. For example, survey data from Punjab, India, reveal that once women's home production activities are accounted for, work participation rates skyrocket from more than 30 percent to 86 percent for women ages 15 and older.

Nationally representative time-use data from around the world reveal a disproportionate burden on women. Data from several African countries show that women spend anywhere from two to 18 times more time per day on extended production activities compared to men. In Nigeria, Uganda, Kenya, and Nepal, the ratio of women to men who do unpaid house and care work hours ranges from 1:3 to 4:5.

Time-use data can also clarify what "care work" is and why it is a crucial health for all issue to track. Time-use data offers a solution to the narrow understanding of "care work" adopted by Western feminist economists, which is limited to direct care of persons and household chores and include cooking, cleaning, and washing clothes. Achieving health for all requires accounting for all unpaid health services that can be physically demanding and skill-specific. From pre-diagnosis of illness to transportation to and from health-care facilities, as well as liaison services with a health system, caring for a sick person demands constant availability, responsibility, and management. All of these tasks are often managed by a female family member. In situations where a woman is acting as an unpaid caregiver in a private home, they are doing for dependents the same work that a paid caregiver is doing for patients in a nursing or health facility.

In the United Kingdom, unpaid work accounts for 90 percent of care hours for more than 2.2 million fully dependent adults. Data from Uruguay's National Unpaid Health Care Survey show that every week, people under 65 years of age spend an average of 53 hours providing unpaid health care, with more than 60 percent working more than 40 hours. What's more, women account for more than 76 percent of unpaid health caregivers there, and 45 percent of that care goes to people outside of their households.

Unpaid care work fills in the gaps where there is a lack of "official"—or financed—health care.  The resilience of the underfunded health-care system relies on unpaid work provided by women, while the GDP paradigm extracts unpaid labor by women in order to cut costs and achieve a much wider coverage of health care.

In Uruguay, every week, people under 65 years of age spend an average of 53 hours providing unpaid health care

Despite time-use data on unpaid work being available for more than 50 years, it has made no impression on the pathological paradigm driving the economy and has not changed our value system. Patriarchy has often driven the global level of gender inequality in unpaid and total work burden; many in power are clearly reluctant to distribute economic resources proportionally to the effort. There is also a fundamental ethical question: Do we want the life-giving work women do to be valued in a system that recognizes war, ecosystem devastation, and the trafficking of people and endangered species as great for growth? No. We should replace the aggregate GDP measure with time use, so that we can redistribute resources to those who work the longest hours and contribute the most toward health and well-being.

In the existing paradigm, policymakers and the public do not know where unpaid workers live or the types of services they provide to their respective economies. GDP will never deliver health for all as long as the current measure of progress is life-threatening to people and the planet's living systems. Time use can take us the last mile, where we find health's largest workforce. The WHO Council on the Economics of Health for All is striving to implement time-use data and develop an economy for health. Help us reach central bankers, finance ministers, and international financial institutions with our message and arguments to ensure a healthier, fairer, and more sustainable future for the world.

Professor Marilyn Waring is a member of the World Health Organization (WHO) Council on the Economics of Health for All.