Five Problems With the Swedish Approach to COVID-19

As herd immunity remains elusive, Sweden’s experience seems to be a cautionary tale—Norway and Denmark have fared better 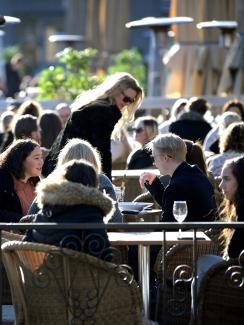 People enjoy the sun at an outdoor restaurant, despite the continuing spread of the coronavirus disease (COVID-19), in Stockholm, Sweden March 26, 2020. TT News Agency/Janerik Henriksson via REUTERS
by Theo Vos and Katherine Leach-Kemon June 4, 2020

On May 12, a headline in Foreign Affairs declared “Sweden’s coronavirus strategy will soon be the world’s.” What would it look like if the world embraced Sweden’s strategy? Most likely, many more deaths from COVID-19. While many of its European neighbors enacted strict lockdowns, Sweden took a very different approach to COVID-19. Its approach, which enjoys widespread support among Swedes, is based on “nudging” people, not forcing them, to comply with social distancing guidelines. The government aims to slow the spread of the virus so that the health system can provide high-quality care to those who fall ill but not shut down the economy. But this approach appears to be costing it dearly in terms of lives lost to the coronavirus.

While Sweden has managed to avoid a surge of COVID-19 patients overwhelming hospitals to the same degree seen in the UK, Italy, and New York, the country has been hit much harder by COVID-19 than neighboring Norway, Denmark, and Finland according to University of Washington’s Institute for Health Metrics and Evaluation (IHME) forecasts. As of May 29, IHME projects that Sweden’s number of total deaths per 100,000 people by August 4 will be on par with France.

Why does Sweden have such poor COVID-19 outcomes relative to its neighbors? Let’s examine some of the factors that are working against Sweden.

The lower the movement, the lower disease transmission. Even though Swedes decreased their movement in response to the government’s voluntary social distancing guidelines, their mobility did not drop as steeply as it did in other places. In Norway and Denmark, for example, mobility dropped by 59 percent and 60 percent, respectively, at its lowest point, while Sweden’s mobility dropped by a maximum of 33 percent (Figure 2).

Although herd immunity has never been an official goal of the government’s effort to combat COVID-19, Swedish officials had said it was likely that Stockholm would reach herd immunity sometime in mid-May.

Problem #3: Elderly People Have Borne the Brunt of the Crisis

Around 90 percent of COVID-19 deaths have occurred in people over seventy years old. Coronavirus has ravaged a vulnerable population that could not follow the government’s advice to avoid contact with others—people in nursing homes. In response to these concerns, Swedish prosecutors launched a preliminary investigation into a nursing home in Stockholm with a large number of deaths on May 8.

Low levels of infection give public health measures (testing, isolation, and contact tracing) the best chance of succeeding to contain the virus. The number of infections continues to be substantially higher in Sweden compared to other Nordic countries. Infections in Sweden were estimated at 19.35 per 100,000 on June 2, compared to 1.64 in Denmark, 0.11 in Finland, and 0.24 in Norway. Denmark, Finland, and Norway have been able to get transmission down to a low level largely due to their sharp reductions in mobility.

Problem #5: Testing in Sweden has Lagged Behind

To prevent the virus from spreading undetected through the population, it is vital to have sufficient testing, and the isolation and contact tracing associated with it. Testing needs to keep pace with, and ideally be well above, infections. Having this buffer is important in case there is a sudden resurgence in infections. IHME estimates that Sweden’s testing was five times higher than estimated infections as of June 2.

Testing needs to keep pace with, and ideally be well above, infections.

Despite these grim trends, recent data coming out of Sweden has shown encouraging signs: COVID-19 deaths are declining, and the most dire predictions appear unlikely to pan out.

Recent data coming out of Sweden has shown encouraging signs

IHME’s projections for total deaths in Sweden have declined substantially over time, mainly due to new data on daily COVID-19 deaths showing a drop. Between May 4 and May 29, IHME’s projections for total COVID-19 deaths in Sweden were cut in half, and are projected to reach 5,258 by August 4. Also, Sweden seems to have so far escaped the fate of the large COVID-19 death tolls seen in New York and in the United Kingdom despite its relatively relaxed approach to combatting coronavirus.

What has worked in Sweden’s favor?

Despite some signs of progress, Sweden’s experience appears to be a cautionary tale. Its death toll far exceeds its neighbors, and its economy is faltering even though it imposed fewer restrictions on movement.

So far, the coronavirus strategies worth emulating seem to lie across Sweden’s border

In contrast, the social distancing measures imposed by the governments of Norway, Denmark, and Finland have dramatically reduced deaths and infections in those countries, boosting their chances of containing the virus as they reopen. But in Sweden, challenges in controlling the spread of coronavirus may cause visitors from neighboring countries and elsewhere to stay away, potentially inflicting economic pain for months to come. Concerns about cross-border disease transmission are proving to be a source of political tension in the region. Both Norway and Denmark have opened their borders to each other, but they remain closed to Swedes.

The pandemic is far from over, and IHME will continue updating its projections to understand how COVID-19 trends are evolving in Sweden. So far, the coronavirus strategies worth emulating seem to lie across Sweden’s border.