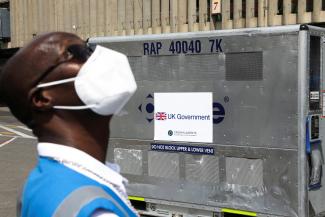 A health official stands next to a container holding a shipment of more than 400,000 doses of the Oxford-AstraZeneca COVID-19 vaccine, donated by the the British government, in Nairobi, Kenya. REUTERS/Baz Ratner
by Md. Rizwanul Islam January 5, 2022

The global health mantra is familiar—countries can only effectively prepare for and respond to pandemics through cooperation. COVID-19 provides little evidence that state behavior has heeded this slogan. During the most severe global crisis in decades, multilateralism failed, and nationalism prevailed.

This reality casts a shadow on efforts to improve global governance for future pandemics, especially for low- and middle-income countries (LMICs). COVID-19 has undermined confidence that international cooperation can deliver when pandemics threaten a world characterized by vast disparities in political power, economic development, and health-system capacity among nations.

During a pandemic, doubts about multilateralism produce bigger problems for LMICs, which lack the capabilities that give more powerful states expanded options during crises. As governments look beyond COVID-19, LMICs remain dependent on multilateralism but must develop better and more diverse ways to cooperate in preparing for and responding to global health threats.

The Failure of Pandemic Multilateralism

As has been widely acknowledged, many states—especially the most powerful ones—did not embrace international cooperation when COVID-19 turned into a once-in-a-century pandemic. The World Health Organization (WHO) is the specialized health agency of the United Nations (UN) and the central intergovernmental institution responsible for responding to serious international health events. Over decades, the WHO's mandate has expanded, and the organization has achieved laudable successes, including the promotion of vaccinations around the world. However, during COVID-19, WHO member states have shown scant interest in making the WHO the center of gravity for pandemic responses.

Similarly, political differences among states, particularly between China and the United States, have made the UN Security Council and General Assembly marginal diplomatic venues in the fight against COVID-19. The Security Council has only produced a narrow resolution calling for a COVID-19 ceasefire in armed conflicts that did not directly refer to the WHO's role in tackling the pandemic. The absence of a veto threat meant that General Assembly resolutions went farther by reaffirming the United Nation's role, highlighting the importance of multilateralism, and emphasizing the need for access to vaccines, medicines, and medical equipment. But these resolutions did little, if anything, to make the binding obligation on international cooperation in the UN Charter more effective against COVID-19. Further, states have not based their pandemic policies on these resolutions.

The Power of Pandemic Nationalism

The most prominent thread running across state responses to COVID-19 is nationalism. Countries have persistently prioritized protecting their own populations, economies, and national interests in their pandemic policies, even when such policies conflict with science, are ineffective in protecting health, and produce grossly inequitable outcomes. This nationalistic pattern has been particularly notable in countries' vaccine access and travel restriction policies.

The term "vaccine nationalism" has entered the global health lexicon during COVID-19. Countries with access to vaccines, especially high-income countries and China, have predominantly used supplies to immunize their own national populations. This behavior produced accusations of vaccine hoarding from global health officials, but such rhetoric has had no discernible effect on the allocation of vaccine supplies. Even India, which initially sought to supply other countries with vaccines, prohibited exports in order to increase domestic access when faced with a crisis caused by the delta variant. Donations to LMICs have been insufficient to overcome the inequity in vaccine access that has persisted since vaccines were developed.

Nationalistic policies have also been prevalent in the ubiquitous use of travel restrictions during the pandemic. COVID-19 reignited long-standing controversies about the utility of travel measures against transnational disease spread. But, as the travel bans imposed on southern African countries after South Africa's identification of the omicron variant demonstrate, the controversies have not stopped governments from resorting to travel restrictions without adequate public health rationale or international coordination.

The dispute between the European Union (EU) and India in mid-2021 over the EU's travel rules highlights how power, rather than cooperation, drives diplomacy over travel restrictions. The EU refused entry to travelers from India immunized with vaccines not authorized for use by the European Medicines Agency. These vaccines included Covishield—the Indian-produced version of the WHO-approved Oxford-AstraZeneca vaccine—and Covaxin developed and authorized in India but not yet approved by the WHO. In response, India threatened to impose reciprocal restrictions or additional travel measures on EU travelers. The spat triggered diplomatic efforts between India and EU member states on mutual recognition of vaccine certificates. But most LMICs do not have India's vaccine development and manufacturing capabilities or its ability to exert political pressure on high-income countries.

The Challenge of Pandemic Governance for LMICs

Criticism of pandemic nationalism during COVID-19 has produced responses that often emphasize the legality of governmental actions on vaccine supplies and travel measures. Nothing in international law—including human rights law—specifically requires, the argument goes, a state to export vaccines to other countries or admit foreign travelers during a health emergency. High-income countries that participate in global surveillance efforts, contribute to international scientific studies, engage in pandemic diplomacy, and donate millions of dollars and vaccine doses have, the argument continues, satisfied general obligations to engage in international assistance and cooperation found in the UN Charter, WHO Constitution, the International Health Regulations (2005), and other applicable treaties.

Such a rethink of pandemic governance is needed, but LMICs cannot passively stand by and allow the most powerful countries to decide what a reformed global pandemic regime contains. COVID-19 teaches the harsh lesson that LMICs remain dependent on multilateralism, but LMICs are not powerless—they can change how they engage with intergovernmental institutions on global health problems. For example, with member states unlikely to increase assessed contributions to the WHO, LMICs could pool financial resources to make voluntary contributions to the organization for programs designed to create benefits across LMICs.

LMICs also need to intensify their cooperation through other diplomatic mechanisms. There is some interest in including global health within a rejuvenated Non-Aligned Movement (NAM) designed to prevent the geopolitical rivalry between China and the United States from manipulating and marginalizing LMICs. Similarly, COVID-19 provides incentives for LMICs to strengthen regional organizations—such as the African Union—to address health threats. NAM and regional approaches should ensure that the strategies adopted support global efforts rather than deepen parochialism in pandemic governance.

Finally, COVID-19 has highlighted that LMICs must transform how they allocate government resources for public health. Reformed multilateral, strengthened regional, and revitalized non-aligned mechanisms will also fail if LMICs do not improve their own national public health and health-care capabilities. Cooperation among LMICs can support shared commitments to change policy, and budget priorities to increase domestic health expenditures, even within the poorest of low-income countries.

Md. Rizwanul Islam is a professor of law and a member of Center for Peace Studies at North South University, in Bangladesh.

A Sensible Approach to Omicron