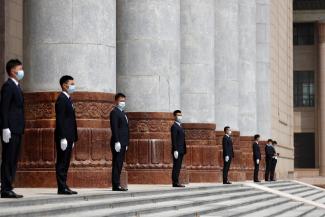 The consequences of the COVID-19 pandemic for low-income countries have been, and continue to be, grim. The lack of meaningful access to vaccines remains a crisis, exacerbated by variant strains spreading within populations already reeling from economic disruption, social dislocation, increasing food insecurity, and rising poverty. As Amitav Acharya argues in his contribution to this series, the impact of the pandemic, and the great powers' responses to it, creates incentives for nations, especially low-income countries, to reject a post-pandemic future determined by geopolitics or a resurrected liberal international order.

Certainly, the damage low-income countries have suffered, and will continue to endure, presents challenges for U.S. foreign policy beyond ending this pandemic and preparing for the next one. What is not clear is whether the United States will encounter coordinated resistance from low-income countries threatened threatened by balance-of-power politics, skeptical about U.S. intentions, and motivated by the devastation caused by COVID-19 to demand changes in global health that challenge U.S. interests and influence. Has the pandemic created conditions conducive to the strategy of non-alignment returning to international politics and shaping global health over the next decade?

In assessing the anger that Chinese and U.S. responses to the pandemic have provoked in many countries, Acharya mentioned the Non-Aligned Movement (NAM) created during the Cold War. Fueled by decolonization, many newly independent nations began to join forces in the 1950s to advance their interests in ways the U.S.-Soviet rivalry could not subsume. These efforts produced a push to secure sovereignty over natural resources in the 1960s, advocacy for a New International Economic Order in the 1970s, and a campaign for universal access to primary health care in the World Health Organization (WHO) at the end of the 1970s. This Health for All initiative represented a radical shift for health cooperation and reflected a vision Charles Pannenborg described as a New International Health Order.

U.S. opposition to Health for All arose from domestic political hostility towards "socialized medicine"

Launched in 1978, the Health for All effort foundered in the 1980s. The Soviet invasion of Afghanistan in 1979 intensified the superpower rivalry, contributing to the marginalization of many issues, including health, that the NAM had addressed over previous decades. In this geopolitical and ideological maelstrom, President Ronald Reagan withheld funding from WHO because of its work on Health for All. The end of the Cold War and the Soviet Union’s collapse left the United States as the pre-eminent world power and made the NAM "a movement adrift." When it focused on global health in the post-Cold War period, the United States supported approaches different from Health for All and paid no attention to the fading NAM.

Back to the Future?

In confronting COVID-19's consequences, U.S. foreign policy is addressing global health through the strategic lens of competition with China. Currently, in this rivalry, neither the United States nor China is taking into account the NAM or any other non-aligned bloc in responding to the pandemic. Acharya's description of the "multiplex world" captures the pre-pandemic complexity of global health governance, which involved strong and weak countries, global and regional institutions, corporations, non-governmental organizations, foundations, and public-private partnerships. This governance web formed and expanded when geopolitical non-alignment was not an issue, even as the balance of power re-emerged in the 2010s.

However, the pandemic has battered global health governance, inflicted health and economic damage in low-income countries, and accelerated the return of geopolitics by intensifying the U.S.-China rivalry. In this context, a strategy of non-alignment looks more salient, with COVID-19 providing the catalyst that decolonization did during the Cold War. For low-income countries, the continuing lack of access to vaccines, the need to recover from economic and health damage caused by the pandemic, and the mounting geopolitical pressure to "take sides" converge to produce incentives to pursue non-alignment again in world affairs.

These incentives have not escaped notice. An ASEAN Post op-ed argued that COVID-19 is "a golden opportunity for the NAM to reorganize and develop new goals and objectives in line with the needs of its member states caught in the crossfire of a U.S.-China confrontation." A vaccine summit among states and non-governmental organizations from the global South claimed that a "new international health order is in formation" that "echoes proposals put forward in the 1970s through the UN by Global South States to end economic imperialism and dependency through a New International Economic Order."

The potential re-emergence of non-alignment faces challenges. Despite decades of questionable relevance, the NAM established during the Cold War still operates, creating a possible barrier to rejuvenating non-alignment as a strategy in the post-pandemic world. Whether a NAM 2.0 would help or hinder efforts to improve global health governance is not clear. Defining what non-alignment means for a policy area grounded in science and epidemiology can prove difficult. The governance multiplexity that developed during the post-Cold War period complicates decision-making about what guidance non-alignment provides on the diverse global health problems that policymakers face. Many problems, such as non-communicable diseases, are unlikely to generate friction between the United States and China, leaving the non-alignment approach without a strategic purpose. In addition, sometimes the U.S. and Chinese governments might take the same position. For example, they currently share a lack of enthusiasm for negotiating a pandemic treaty.

Neither the United States nor China would be keen on a rejuvenated NAM or an entirely new movement and would work to re-align countries tempted to counterbalance U.S. and Chinese power through non-alignment. An op-ed in the Global Times, a newspaper supported by the Chinese Communist Party, expressed the concern, or sent a warning, that "the so-called new Non-Aligned Movement separates China's friendly relations with other member countries and goes against the purposes of the organization."

U.S. foreign policy will not tolerate non-alignment if countries attack the United States as imperialistic and reject the U.S. emphasis on global health security, the protection of intellectual property rights in pharmaceutical innovation, and the linking of health diplomacy with democracy promotion.

Recognizing these challenges does not eliminate the need to probe how the pandemic and the intensifying U.S.-China rivalry create the need to find new strategies that avoid being warped by realpolitik and that address the needs of low-income countries. During the Cold War, the NAM never had to maneuver between the superpowers during or after a catastrophic pandemic. Today, low-income countries concerned that geopolitics might poison their efforts to end the COVID-19 crisis, recover from its devastation, and protect their citizens' health need flexible, kaleidoscopic coalitions that can build and sustain health cooperation amidst great-power competition. A doctrinaire strategy of non-alignment will not serve low-income countries well in global health.