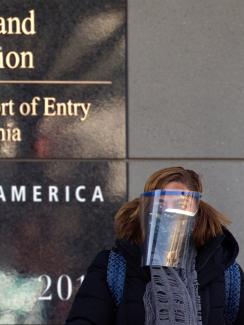 A traveler arrives in the United States through the pedestrian entry at the San Ysidro - Tijuana, Mexico, border crossing, in San Diego, California, on December 2, 2020. REUTERS/Mike Blake
by Catherine Z. Worsnop November 3, 2021

Border restrictions have been a defining feature of the COVID-19 pandemic. When the World Health Organization (WHO) declared COVID-19 a public health emergency in January 2020, it recommended against travel or trade restrictions. By April 2020, all states had adopted border measures, and the WHO acknowledged that travel measures applied with other interventions could help manage COVID-19. The ubiquity of border restrictions challenged a core aim of the WHO's International Health Regulations (IHR)—that responses to COVID-19 avoid "unnecessary interference with international traffic and trade." The pandemic provides insights for how governments and the WHO should address border measures during future outbreaks.

Since the nineteenth century, international law on infectious diseases has sought to balance public health with travel and trade interests. The IHR reflect that goal. Under the IHR, the WHO must issue recommendations—which can address border measures—to help states parties respond to a declared public health emergency of international concern (PHEIC). States parties can impose border measures that differ from WHO recommendations if governments base policy on scientific evidence, provide public health rationale and evidence to the WHO, and review measures after three months. The consensus pre-COVID-19 was that travel and trade restrictions should not be used during outbreaks because they provided little public health benefit and created many harms. The WHO has recommended against border measures during five of the six PHEICs it has declared.

Since the nineteenth century, international law on infectious diseases has sought to balance public health with travel and trade interests

In spite of the IHR, states have imposed border restrictions contrary to WHO recommendations during past outbreaks. During the 2009 H1N1 pandemic and 2014 Ebola outbreak, about 25 percent of IHR states parties imposed trade or travel restrictions despite WHO recommendations against doing so. Domestic political pressures were a key factor explaining why many states ignored WHO advice.

Yet, most states followed the WHO's guidance and did not restrict travel or trade during these outbreaks, and after-action reports evaluating the H1N1 and Ebola responses criticized the use of border measures.

With COVID-19, things look different. First, all countries have imposed some border measures ranging from quarantine requirements, visa restrictions, or border closures. Second, country experience and research suggest that border measures have helped manage the pandemic and have had public health benefits. As a result, the soundness of the WHO's initial recommendation against border measures has been questioned, and the WHO updated its guidance, noting that some border restrictions may be warranted. But countries' COVID-19 border policies have often been haphazard, and the variety of measures produced uncoordinated policies affecting public health and creating social, ethical, economic, and logistical problems.

In the face of a pandemic of a novel virus, changing policies based on new information is understandable. But, with border measures, questions remain. What drove variation in government border policy? What role does the WHO have in the coordination of border measures to ensure that the right measures are adopted and that their benefits and harms are adequately balanced? How should harmful effects of legitimate border restrictions be managed? What should been done when governments use border measures as an excuse to restrict immigration and abuse human rights?

Some governments tried to make risk-based decisions about border policies during COVID-19 with mixed success and some questionable outcomes. Others used broad quarantine and testing requirements, entry restrictions, or border closures as part of a zero-COVID strategy. Some governments had no identifiable border strategy. Consistent with past outbreaks, domestic political considerations continued to shape border policies. U.S. border management during the pandemic provides an example.

Until the recent announcement that foreign nationals can soon enter the United States if fully vaccinated, U.S. border policy looked similar under President Donald J. Trump and President Joe Biden. Despite expectations that he would change the U.S. response to the pandemic, President Biden largely continued the Trump administration's border policies, even as epidemiological realities shifted. U.S. border measures remained too restrictive in some cases and not restrictive enough in others. The U.S. approach operated under unclear metrics and methodology, which is puzzling from a public health perspective because we know more about what works at the border than we once did.

President Biden's border policy makes more sense when viewed as an approach driven by domestic political calculations. President Biden entered office in a polarized political climate, with COVID-19 border politics exacerbated by the Trump administration's anti-immigration stance. Reversing or changing existing policies risked creating political backlash against the Biden administration as it focused on the vaccine rollout—its top COVID-19 priority. Worries that changes in COVID-19 border policy could become fodder for President Biden's critics seem well-founded. The Biden administration may have calculated that maintaining the status quo at the border was the least politically risky option.

Border Measures after COVID-19: What Role for the WHO?

Looking ahead, the WHO needs to change its approach to border measures. The WHO did not update its initial recommendations against border measures fast enough during the pandemic, and COVID-19 provided ample health and political reasons for states to protect their future ability to enact border measures.

Second, given the COVID-19 experience, border measures will continue to be politically attractive to governments. In response, the WHO should recognize that the centrality of politics is an opportunity to shape governments' behavior. The WHO has tools to shift political incentives in favor of following its advice. It should systematically exercise its authority under the IHR to request and share information from states parties about border measures, request states parties reconsider measures that lack adequate public health rationale, and remind states parties to review measures within three months.

Like all international organizations, the WHO also has informal tools to heighten political incentives to follow its advice. The WHO can increase its public messaging about why its recommendations on border policies should be followed and the downsides of not doing so. The WHO can praise states that follow best practices and criticize those that do not. The organization can provide behind-the-scenes encouragement of states parties harmed by inappropriate border measures to activate the never-used IHR provisions on state consultation or dispute settlement. The WHO can also informally nudge interested NGOs or states to set up an independent mechanism to monitor state border policies and IHR compliance as has happened in other issue areas.

Such strategies are not foolproof, take financial resources that the WHO lacks, and may be politically risky for the organization. But getting governments to follow WHO advice and comply with IHR obligations will require shifting the political pressures that governments face.

The COVID-19 pandemic has questioned the global health consensus against using border measures during outbreaks. Yet, the IHR's aim to protect public health while avoiding unnecessary interference in international traffic remains sound. During the next outbreak, getting most countries to impose border measures that satisfy that objective is an important global governance task. COVID-19 demonstrates that reaching that goal requires more accurate, nuanced, and usable guidance from WHO and a concerted effort to make following that guidance politically attractive for governments.

Catherine Z. Worsnop is an assistant professor at the University of Maryland School of Public Policy

Rethinking Border Management and Global Health Security after the Pandemic

Should the Threat of Pandemics End the Age of Mobility?

by Michael A. Clemens, Thomas Ginn