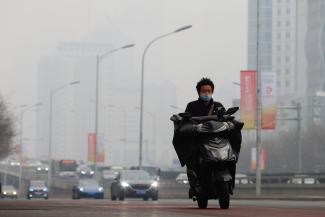 A man wearing a face mask rides a scooter on a day with heavy pollution, in Beijing, China, on February 13, 2021. REUTERS/Carlos Garcia Rawlins
by Sumi Mehta December 5, 2022

Billions of people living across India, China, Kosovo, Pakistan, Mexico, Peru, and Saudi Arabia have no choice but to breathe some of the most hazardous air quality on Earth. Yet, as world leaders and delegates gathered in Sharm El-Sheikh, Egypt, for this year's UN Climate Change Conference (COP27) last month, there was skepticism about whether or not those assembled would address the longer-term effects of climate and the urgent situation in regions where pollution is a daily and deadly fact of life.

While we have only limited data on air quality in many rapidly developing countries, the current data is enough to tell us that air pollution is a leading risk factor for child health and noncommunicable disease for millions of people. Historically, annual convenings like COP tend to follow their own rinse-repeat pattern of setting future milestones in climate activism without putting mechanisms in place to see them through. Case in point: The second day of COP27 featured a panel essentially devoted to assessing implementation of the Paris Climate Agreement, which was formulated six years earlier at COP21. Previous COP pledges to meet carbon-emissions goals and tamp down rising temperatures that instigate catastrophic natural disasters and upend ecological order have fallen demonstratively short. Consequently, any measures aimed squarely at offsetting existing air-quality deficits—already something of a secondary concern at these events—gain little to no ground. The end result? Despite more than 90 percent of the world breathing polluted air, air quality and its harms on health have been entirely left out of most national climate action plans and policies.

The World Health Organization organized a dedicated climate and health pavilion at COP, and led the way in urging the active inclusion of health within climate negotiations. And yet, climate commitments designed to achieve substantial health benefits—including those focused on emissions reductions offering multiple benefits for air quality, climate, and health—remained on the sidelines.

Most concerning is how few countries prioritize a focus on protecting poorer communities, people without access to clean energy, and children (UNICEF has already sounded the alarm on air pollution's significant health affects on children). Even if that paradigm improves, this underscores the kind of missed opportunity we can avoid by making a few small adjustments to our processes and point of view.

At the end of 2020, the nearly two hundred international parties who entered into the Paris Climate Agreement were due to formally submit homed-in emissions goals based on COP21 pledges. But, according to UK-based climate-policy watchdog Carbon Brief, only forty-five parties met that deadline. Not surprisingly, an even smaller share of those countries had sufficient strategies for improving clean-air quality as part of their nationally determined contributions, or had country action plans to address climate change. This translates to millions of avoidable illnesses and deaths each year for people living in Africa and Asia, who experience the highest levels of ambient PM2.5—fine particulate matter air pollution—including India, Nepal, and Niger, where it can least be afforded.

As a 2021 study in the journal Environmental Research Letters noted, air pollution is in the top five of all risk factors for the global burden of disease in terms of mortality (number of deaths) and morbidity (disability-adjusted life years). The study elaborates on how "pollution-related diseases are responsible for 1.7 percent of health care costs in high-income countries, and 7 percent of health-care costs in middle-income countries," and "the wider economy is also affected, with pollution-related diseases causing direct gross domestic product (GDP) losses in low-income and middle-income countries of up to 2 percent per year."

As is so often the case, shortfalls in meeting life-saving milestones are most pronounced in wealthier pockets of the world. In Western Europe, for example, almost 90 percent of nationally determined contributions include a careful consideration of social vulnerability, health, or air quality. In contrast, 73 percent of African states included a detailed focus on social or geographic vulnerability. A focus on air pollution was notably absent across the board, with only 5 percent of countries around the world including specific mention of air quality targets and goals.

The point is: health can't be siloed off from conversations about more far-reaching climate targets. In effect, climate control need not be a net zero-sum game.

Bringing Health and Environmental Communities to One Table

It's essential that anyone reading this who is active in climate analysis, clean-air advocacy, or civil rights makes contact with their counterparts in the other two areas and begins coalescing around shared objectives. Smaller coalitions of passionate reformers can convene their own semi-formal workshops and emerge as complements to—and possible models for—gatherings like COP that trumpet grandiose intentions. If we’ve learned anything during this pandemic, it's that networks of like-minded change agents with real footholds in communities are the leaders we need to follow.

These intentional meetings ought to move swiftly beyond talking points and tout imminent targets. This is where our work can differentiate itself from what the public often views as rhetorical flexing. It's imperative that we make the air everyone breathes less toxic starting today, leveraging proven methods and chipping away at the larger threat without having to trade off the lives of the most vulnerable as the sunken costs of down-the-road planning.

Appeal to the Public

When it comes to how the public health community can summon wider support, people around the world can and will appreciate hard truths, so long as they're connected to sound action, which is only possible if all the above steps are heeded without delay. It's up to public health professionals to think outside the box and rouse both attuned observers and those who have yet to consider themselves part of the movement.

Deferring accountability on an issue like climate change risks relegating it to abstraction. Nothing can be left unclear about the consequences—to personal health, the economy, and the environment—of breathing needlessly contaminated air. And everything essential and doable about its remediation has to be made plain for the largest and most diverse audience possible.

In the wake of COP27, we all need to do our part to encourage leaders to take action on climate change by elevating the importance of air quality and the health benefits of climate action; acknowledging that climate change's greatest impact is on the most socially, geographically, and economically vulnerable populations; targeting climate actions to improve public health and health systems; and focusing on reducing emissions of the most health damaging pollutants.

Then we can all breathe easier.

Sumi Mehta is the vice president of environmental and climate health at Vital Strategies, has over twenty years of experience in air pollution, health and development. Mehta is author of Rising Tides, but Missing the Boat: Do Nationally Determined Contributions Neglect Health, Air Quality and Social Vulnerability?