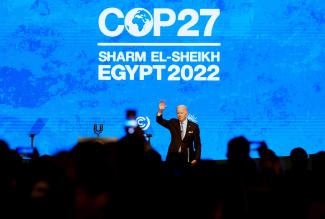 The twenty-seventh Conference of the Parties (COP27) of the UN Framework Convention on Climate Change (UNFCCC) agreed in Sharm El-Sheikh, Egypt, this month to create a fund to compensate certain, still-to-be-determined, low-income countries for the not-yet-defined harms they suffer from climate change. The agreement to establish a loss-and-damage fund was hailed as a diplomatic breakthrough and a victory for climate justice.

However, this decision adds compensation to the climate policy imperatives of mitigation and adaptation. The Economist noted that countries have not "worked out how to do all three simultaneously." But the situation is worse. Nations have not figured out how to do any of them adequately. COP27 demonstrated—again—that governments still have not addressed mitigation or adaptation at the speed, scale, and sustainability needed despite ever more evidence about the perils that climate change produces. The fund creates a new, largely undefined responsibility.

Justice delayed, the adage goes, is justice denied. With climate change, past and ongoing failures on mitigation and adaptation multiply the direct and indirect harms to health that all countries will encounter and constitutes something more dangerous than justice delayed.

One Step Forward, Two Steps Back on the Highway to Climate Hell

On mitigation, COP27 made no progress on collective action to reduce greenhouse gas emissions sufficiently to meet the planetary redline set by the 2015 Paris Agreement on Climate Change—limiting global warming to 1.5 degrees Celsius above pre-industrial levels. It did not strengthen adaptation efforts, particularly in reducing the shortfall in the level of financing that high-income countries have promised—but have not delivered—to low-income countries. It is hard to overstate the seriousness of yet another COP failure to produce anything close to what is needed to reduce greenhouse gas emissions and support adaptation needs.

Show Me the Money

The triple burden of mitigation, adaptation, and compensation poses questions for U.S. policy. The United States is the leading historical emitter of greenhouse gases, remains the second biggest national source of such emissions, and has been consistently inconsistent with climate change policies. It has been, and will long be, in the crosshairs of low-income country demands for loss-and-damage compensation.

The Joe Biden administration has elevated tackling climate change at home and abroad more than any previous administration. It secured the largest amount of federal climate funding ever for domestic strategies. President Biden has launched several foreign policy initiatives on mitigation and adaptation, including those announced at COP27 and during the Group of 20 (G20) summit this month. The administration did not block the creation of the loss-and-damage fund at COP27.

However, none of the billions in funding secured or promised or initiatives launched support compensation for climate change harms. The Biden administration has made no financial pledges or other specific commitments to support the loss-and-damage fund. The lack of remarks or statements on the White House website from President Biden or other U.S. officials on the COP27 fund decision underscores that the fund—and its foundation in climate justice—is not a strategic priority for the administration that has devoted more political capital to climate change than any predecessor.

The Biden administration is unlikely to make the fund a priority over the next two years. With the Republican Party in control of the House of Representatives through 2024, any request by the administration to finance the loss-and-damage fund will be dead before arrival in Congress. As in the past, U.S. climate politics are not bipartisan on mitigation and adaptation, let alone compensation for loss and damage. The fund has drawn U.S. political criticism about being a UN "green slush fund" and warnings that it could energize populist movements in democratic countries against climate change initiatives.

One controversy that flared at COP27 over the loss-and-damage fund concerned whether China should contribute to it. China—the world's second largest economy and the current leading source of greenhouse gas emissions—rejected the notion that it has a responsibility grounded in climate justice to help compensate low-income countries for harms caused by climate change. This position means that China will not make the fund a priority in its strategic approach to climate change, like the United States under the Biden administration.

This similarity reflects how geopolitics affects climate change. Like the U.S. climate initiatives announced at COP27 and during the G20 summit, China prefers to direct its climate funding through channels over which it has more sway, such as the China South-South Climate Cooperation Fund that President Xi Jinping announced in September to assist low-income nations.

The perceived need to compete on climate change generates incentives for the United States and China to provide climate finance in ways that offer potential geopolitical leverage. For the next decade, these incentives will work against the United States and China viewing the loss-and-damage fund as geopolitically useful. Put differently, the big money will go elsewhere for reasons having nothing to do with climate justice.

Decades of failure on mitigation and adaptation have made climate change a global health danger. As a new, additive mechanism, the fund that COP27 created is not intended to finance mitigation and adaptation efforts. However, such efforts can support prevention of, preparation for, and responses to health threats that climate change will bring. In that sense, how loss-and-damage compensation—and the climate justice such compensation achieves—helps public and global health systems confront climate change for the rest of this century and beyond is not clear.

Global health is no stranger to the desire for justice. COVID-19 sparked arguments about "pandemic reparations" and proposals for new approaches to "global health justice." The demands for more justice in global health and climate change policies converge most powerfully on mitigation and adaptation. But COP27 produced more justice denied on these imperatives, with countries pretending that making progress on mitigation and adaptation at COP28 next year is merely justice delayed. Where global health and climate change merge, justice so often denied and delayed is justice destroyed.

The Midterm Elections and U.S. Policy on Public and Global Health

The elections produced double-edged results for U.S. efforts to strengthen public health at home and abroad