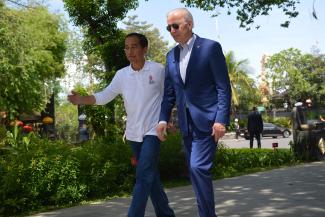 At the 2021 summit of the Group of Twenty (G20) in Rome, the COVID-19 pandemic forced the group to address the greatest global health and economic disaster in decades. By most accounts, this collection of the world's most powerful economies failed to show leadership on this crisis.

At its 2022 summit this month in Bali, Indonesia, the G20 confronted multiple crises that threaten global health. But the G20 Bali Leaders' Declaration responded to these "unparalleled multidimensional crises" with empty rhetoric. The summit exposed the G20's weaknesses and global health's marginalization in a world where geopolitical conflict dominates how powerful countries formulate their national interests.

"There Was a Discussion on the Issue"

The G20 summit in Bali foundered most fundamentally on the war in Ukraine. Russia's aggression has unleashed death, destruction, and suffering on Ukraine. This invasion has caused energy and food security crises that threaten economies and human well-being globally. The energy and food crises make climate change an even scarier nightmare. This war has forced governments to expend scarce political, economic, and human capital in countering its pernicious effects. This conflict has pushed other issues—including rescuing the Sustainable Development Goals—to the margins of national and international policymaking.

This atrocity, committed by a G20 member, roused G20 leaders to tell the world that "there was a discussion on the issue"—a bit of diplomatic drafting that should live in infamy. The leaders noted that most G20 members have condemned the war but that, despite the conflict's role in causing or exacerbating global crises, "there were other views and different assessments of the situation." So, the leaders agreed that the G20—composed of the world's most powerful and influential countries—"is not the forum" to confront the security threats, economic damage, development setbacks, and humanitarian tragedies associated with this war.

Some analyses of the Bali summit have focused on how the power politics that the war reflects have damaged the G20 as a collective-action mechanism. This perspective dovetails with the increasingly prevalent conclusion that balance-of-power and ideological competition now undermines cooperation in every policy area, including global health. A diplomatic club that includes rival great powers cannot manage geopolitical competition or mitigate the consequences that such competition generates globally. In this world, to paraphrase Hans Morgenthau, G20 members think and act in terms of interest defined as power.

"We Reaffirm Our Steadfast Commitments"

The G20's inability to hold Russia accountable for launching an unjust war damages the credibility of commitments made in the leaders' declaration, including those most relevant to global health. For example, G20 members reaffirmed their "steadfast commitments . . . to tackle climate change." One could be forgiven for doubting that G20 members are united on climate change when they cannot meaningfully act against an illegal, horrifying war that has made tackling climate change—and many other global problems—harder.

Further, the Bali summit convened as the twenty-seventh Conference of the Parties (COP27) of the UN Framework Convention on Climate Change was underway, providing an opportunity to cross check those G20 steadfast commitments. The run-up to COP27, and the conference itself, demonstrated that mitigation and adaptation commitments of the world's major economic powers have been, and remain, woefully insufficient. The parts of leaders' declaration on climate change read as if the G20 had, at most, a "discussion on the issue."

The headline-grabbing climate change development during the Bali summit was the announcement of a $20 billion Joint Energy Transition Partnership (JETP) agreement between Indonesia and a group of like-minded Western democracies. This initiative emerged from the Global Partnership for Infrastructure and Investment launched by the Group of Seven (G7) earlier this year. The G7 created the partnership to compete more effectively with China's infrastructure and investment strategy, the Belt and Road Initiative. The G7-driven JETP with Indonesia underscores that the G20 is less than a talking shop on climate change and that geopolitics affects how climate change is tackled.

"We Welcome the Provision of Additional Financial Resources"

At is 2020 and 2021 summits, the G20 emphasized the need to raise financial resources to address deficiencies on pandemic preparedness and response (PPR) in low- and middle-income countries. Earlier this year, the World Bank established a new Financial Intermediary Fund for Pandemic Preparedness and Response (FIF PPR). At the Bali summit, G20 members hailed the fund and praised the $1.4 billion pledged to date.

The G20 played a role in the FIF PPR's creation, but, as a club of the world's largest economies, the $1.4 billion pledged so far pales against the estimated $12.5 trillion in global economic damage caused by COVID-19 and the $10.5 billion annually that experts argue is needed for PPR financing. This gap suggests that such financing is not a priority for the G20, an indication that these major economic powers are more focused on other issues as the pandemic continues to fade in economic and geopolitical importance. Additional pledges are expected, but the path to $10 billion annually, or anything close to that amount, is nowhere on the horizon.

The $1.4 billion pledged so far pales against the estimated $12.5 trillion in global economic damage caused by COVID-19

Vaccine nationalism and vaccine diplomacy characterized the use of COVID-19 vaccines during the most dangerous phases of the pandemic. This reality makes the G20's recognition that "extensive COVID-19 immunization is a global public good" tone-deaf revisionist history. The promise to "advance our effort to ensure timely, equitable and universal access to safe, affordable, quality and effective vaccines, therapeutics and diagnostics” comes with nothing to illuminate what that G20 effort is. The leaders' declaration acknowledged—but did not expressly support—the World Trade Organization's actions on vaccine access that many in global health think are inadequate responses to global inequities in access to pharmaceutical countermeasures exposed by the COVID-19 pandemic.

As the world's leading economic actors, G20 members are engines of pharmaceutical and biotechnology research and development. The vacuous language in the leaders' declaration about the global COVID-19 vaccination debacle and the need to minimize a repeat during the next pandemic indicates that there is no meeting of the minds in the G20 on this global health challenge and no ability to harness the G20's economic and technological clout to move the world in a better direction. This lack of concerted action reflects, among other things, geopolitical competition over biotechnology in ways that go beyond pharmaceutical products.

The G20 gathered in Bali to confront global economic crises caused by war, climate change, and a pandemic. Disagreements about the Ukraine war undermined the credibility of the G20 and the consensus positions in the leaders' declaration. Given the economic carnage that COVID-19 caused around the world, and the global economic damage that climate change poses, the G20's responses to those crises bordered on diplomatic claptrap.

At the heart of the G20's underwhelming performance is the deepening dissonance that geopolitics permeates across collective action on global problems. In realpolitik terms, the impact of geopolitical competition in a gathering of the world's most powerful economic actors comes as no surprise. Balance-of-power and ideological contestation corrodes plurilateralism as well as multilateralism. As experts in other policy domains argue, the most credible option now involves working through smaller, like-minded coalitions, as seen in the G7-led JETP with Indonesia and the disproportionate support Western democracies are providing the FIF PPR.

This perspective does not mean progress in global health is impossible. After all, before geopolitics returned in the 2010s, the G7 had a premier role in global health. However, the change in the balance of power and the global decline of democracy has the G7 and similar like-minded coalitions fighting a war, facing a reckoning on climate change, and realizing that global health leadership after COVID-19 provides no leverage in the geopolitical struggle now underway.

Indonesia: Why Planetary Health Should Be on the Menu for the G20 Chair

The majority of people displaced by climate change won’t cross international borders, will not be refugees or migrants