The majority of people displaced by climate change won’t cross international borders, will not be refugees or migrants 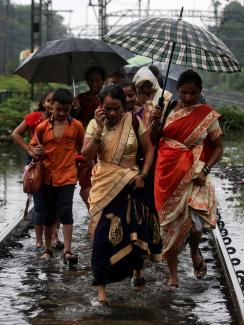 Commuters walk on waterlogged railway tracks after getting off a stalled train during heavy monsoon rains in Mumbai, India, on July 2, 2019. REUTERS/Francis Mascarenhas
by Gulrez Shah Azhar January 17, 2020

Large and increasing numbers of people are likely to be forced to move due to the climate crisis and its related economic and political consequences. Some estimates project the number of people displaced could reach 300 million—orders of magnitude more displaced people than humanity has ever seen at any point in recorded history. Unlike migrations that follow major disasters this movement will be slower and more subtle.

With climate linked droughts, crop failures, and unemployment disproportionately harming the poorest, people will be forced to move to survive. Most will have inadequate means to afford passports, obtain visas, and purchase airfare to travel thousands of miles across international borders. Instead, they will move by foot or ferry, with hand-carried possessions, to nearby places mostly inside the same country or region.

People are forced to live outside their home today

A recent report highlighting the issue of climate change linked it to coastal submergence. Correcting for past errors, the study predicts a number of heavily-populated centers in low- and middle-income countries will slip underwater by the middle of this century. The study sounds a shockingly stark alarm over Mumbai, warning that this densely-populated urban area of 23 million people is at risk of being “wiped out” by the middle of century. Similar predictions are mentioned for several other cities in low- and middle-income countries where the impacts will be disproportionately severe.

It’s not just rising seas: increasing temperatures will also make densely populated parts of the world inhospitable to humans. A 2018 World Bank report predicts declining living standards in these places, which they call ‘heat hotspots’. As of now 65.3 million people are forced to live outside their homes and future projections range from 150 to 300 million people with 200 million being the most widely cited estimate. Experts fear that climate change could produce world’s biggest refugee crisis.

So the questions to ask today are where these hundreds of millions of people currently live, to where will they move, and to what extent is the world prepared to deal with migration on this scale?

This migration will be slow procession. Unlike the aftermath of sudden, violent natural disasters such as volcanic eruptions, earthquakes or tsunamis, the impacts of our climate crisis will be more insidious. Sea levels will rise by millimeters and temperatures will rise by fractions of a degree. However, these incessant, incremental changes will disrupt the environmental balance. With increasing temperatures, crop yields will decline, and melting glaciers will reduce medium to long term freshwater availability. These ‘heat hotspots’ already show declining living standards. Disappearing economic opportunities and difficult environmental conditions will force people to move and will disrupt human life through conflict, food scarcity, the spread of diseases, and other ways.

Where will they move, and to what extent is the world prepared to deal with migration on this scale?

Because most displaced people will not cross international borders and therefore are technically not migrants or climate refugees, the international community is struggling to come to terms with the problem. The UN’s current global agenda doesn’t include them. The international community has focused on the thousands who die each year while crossing the Mediterranean Sea in hopes of reaching Europe—while largely ignoring the millions who will be internally displaced.

Many of these people are trapped by geographical boundaries. In India, home to the largest number of world’s poorest people, the population is bound by the world’s tallest mountain range to the north, by highly secure borders with China in the east, and by a militarized, electrified border with Pakistan in the west, and by the Indian Ocean to the south, all making outward movement by land extremely difficult. Without the wherewithal to afford passports, visas, and airfare, masses of poor people in India are more likely to move to nearby places.

Elsewhere, many of the other countries most affected are in regions like Sahelian and sub-Saharan Africa, the Middle East, and other parts of South Asia. Many of those countries are not signatories of the UN’s 1951 Refugee Convention, protocols or other legal frameworks governing displaced people. In fact, many of them have a poor record of dealing with displaced people.

It’s difficult to surgically separate human intent from human behavior. The reasons why people move are complex and multifactorial. For example, climate change linked increasing temperatures make small scale unmechanised farming unviable leading to indebted small farmers committing suicides by the tens of thousands every year. Those who chose to live are forced to move to the city in search of livelihood as daily wage laborers. As we debate whether this movement was in search of economic opportunities, urbanization or due to climate related factors, that fact that increasingly people are moving remains. These semantic debates only delay policy action, and the problem remains unaddressed whether we choose to apply the label “economic migration” or the label “climate migration.”

These semantic debates only delay policy action, and the problem remains unaddressed...

Humans are undoubtedly resilient. Overall, the world is getting wealthier and people are living longer. And just as air conditioning has made places like Phoenix and parts of the Middle East livable despite extreme high temperatures, technology may lessen the blow to some degree. Still, energy is expensive—and it is disproportionately expensive in low- and middle-income countries where many homes have either no electrical connection or an irregular supply, and many cannot afford air conditioning or power bills that come with it. Another source of relief, freshwater supplies suitable for drinking and agriculture, are running out too.

In this time of resurgent nationalism, as the world comes to terms with climate refugees and deliberates on some legal framework, we must remember that the vast majority of those who will be displaced by climate change will be forced to move within their own countries and will technically not be refugees. We need to think of them, too.

This article was originally published on December 12, 2019 and republished in January 2020 to coincide with the official launch of Think Global Health.