Go to homepage
The G20 Disappoints on Global Health, but That's OK with the United States
Governance

The G20 Disappoints on Global Health, but That's OK with the United States

U.S. foreign policy on global health did not require the G20 Summit to be transformative 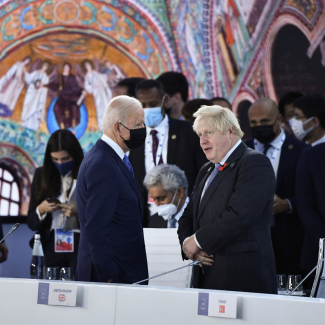 The COVID-19 pandemic, the failure of multilateralism during the pandemic, and the climate change crisis have produced daunting global health challenges. At their summit in Rome, the leaders of the Group of Twenty (G20) countries had an opportunity to transform responses to the pandemic and the health problems climate change is creating. Composed of the world's major economies, the G20 is more representative than the Group of Seven but more streamlined than the World Health Organization (WHO)— giving it advantages when addressing global problems.

The G20 meeting was not a make-or-break moment for U.S. foreign policy on global health

Vaccine Equity and All That

The G20 had to grapple with global vaccine inequity. It did so poorly. The G20 Rome leaders' declaration contains familiar rhetoric about vaccine inequity, including recycled promises on advancing "timely, equitable, and universal access" to vaccines and supporting initiatives, such as building vaccine manufacturing capacity in low-income countries. Some G20 members—such as Canada, India, and the United Kingdom—made new donation commitments, but pressure for more donations was intense before the summit, making it hard to credit the G20 for these promises. The Rome declaration never mentions them, and the G20 did not make any vaccine donation commitment that its members would collectively meet.

National Security Advisor Jake Sullivan stated that, for the United States, "the main thrust of the effort on COVID-19 is not actually traveling through the G20" but remains centered on the strategy crafted at the G7 in June and the Global COVID-19 Summit in September. Sullivan also indicated that, with the Chinese President Xi Jinping and Russian President Vladimir Putin not attending the G20 Summit, the United States and Europe "will be driving the bus on significant global issues." This perspective channels President Biden's desire to have democracies lead responses to global challenges. In their remote participation, Presidents Xi and Putin made headlines by calling for "mutual recognition" of Chinese and Russian vaccines. For the United States, these pleas highlighted U.S. advantages in vaccine technology and diplomacy.

The G20's signature move in global health was establishing a Joint Finance-Health Task Force to promote coordination on pandemic prevention, preparedness, and response (PPR). The task force represents a response to the report of the G20's High-Level Independent Panel on Financing the Global Commons for Pandemic Preparedness and Response, which proposed a Global Health Threats Fund to distribute $15 billion annually for pandemic PPR. The task force will report to the G20 in 2022 "on modalities to establish a financial facility ... to ensure adequate and sustained financing" for pandemic PPR.

The Rome declaration acknowledged the health, economic, and social damage that the pandemic has inflicted beyond COVID-19 illnesses and deaths. It contains commitments, recommitments, and statements of support concerning responses to global health challenges created, highlighted, or made worse by the pandemic. These parts of the declaration replicate global health "boilerplate" language ubiquitous before COVID-19 struck but that, considering the behavior of G20 members during the pandemic, raise hard questions.

For example, given that COVID-19 has set back efforts to achieve the Sustainable Development Goals (SDGs), G20 leaders re-committed to accelerate "implementation of the SDGs and to support sustainable, inclusive and resilient recovery across the world, able to promote equity and accelerate progress on all SDGs, recognizing the importance of nationally owned strategies, SDG localization, women and youth empowerment, sustainable production and responsible consumption patterns, and access to affordable, reliable, sustainable and modern energy for all." And the G20 supports universal health coverage, One Health, fighting HIV/AIDS, countering antimicrobial resistance, addressing non-communicable diseases and mental health, ensuring water and food security, protecting terrestrial and marine biodiversity, etcetera.

The boilerplate is particularly unenlightening when it comes to what G20 members want concerning their commitment to "strengthening global health governance." The G20 supports "an adequately and sustainably funded WHO," backing not evident at the World Health Assembly meeting in May when WHO members did nothing to alleviate the WHO's budget travails. The G20 welcomes "consideration" of a pandemic instrument or agreement and efforts to strengthen the International Health Regulations (IHR)—language that signals no agreement on these pathways for global health governance reform. Lack of agreement is also apparent on whether the World Trade Organization (WTO) should waive patent rights to reduce global vaccine inequity. The G20 will cooperate with WTO members to "work towards enhancing timely, equitable and global access to vaccines."

Although frustrating, such a boilerplate creates no problems for U.S. policy. The G20 Summit was never going to overcome U.S. skepticism about a pandemic treaty. The Biden administration had already signaled its support for strengthening the IHR. U.S. foreign policy on other global health problems remains a work in progress given the emphasis on COVID-19 and strengthening future pandemic PPR, so the declaration's global health laundry lists do not tie U.S. hands moving forward.

All Roads Lead to Glasgow

The G20 also could not avoid climate change, which has become one of the most serious global health threats. As the world's major economies, the G20 members are the primary past and present emitters of greenhouse gases and bear exceptional responsibilities for climate change mitigation and adaptation. On the eve of the climate change summit in Glasgow, the G20 had the opportunity to make bold commitments informed by the dire science and commensurate with the culpability of G20 members for the planetary crisis. But bold commitments did not appear. What the Rome declaration included on climate change, including the pledge to phase out investments in foreign coal power generation, has been panned as woefully inadequate.

The Times They Are A-Changin'

In contrast to the G20 Summit's unimportance for U.S. strategy on global health, the Biden administration used the summit to address other foreign policy imperatives. These included concluding the landmark agreement on corporate taxation, discussing prospects for reviving the Iranian nuclear deal, sorting out global supply chain problems, smoothing over tensions with France over the U.S.-UK-Australia nuclear submarine deal, and reducing growing friction between the United States and Turkey.

The way that global health played out during the G20 Summit provides another indication that the foreign policy significance of COVID-19 and its aftermath for the United States is shifting as other pressing problems emerge and re-emerge to challenge U.S. power, interests, and ideals. Whether this transition anchors global health more firmly amongst other competing priorities in U.S. foreign policy or becomes another fade into marginalization remains to be seen.