Go to homepage
Indonesia: Why Planetary Health Should Be on the Menu for the G20 Chair
Environment

Indonesia: Why Planetary Health Should Be on the Menu for the G20 Chair 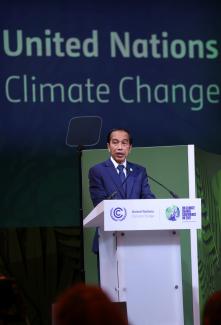 At the World Economic Forum meeting in Geneva in January, Indonesia's President Joko Widodo, the Group of Twenty (G20) chair in 2022, announced that he will focus on strengthening global health architecture, with an emphasis on building resilience in the face of pandemics. Some of the specific issues that will be covered in upcoming G20 health meetings will include the equitable procurement of vaccines, medicines, and diagnostics, and harmonizing international travel and health protocols.

There is no doubt that these are pressing priorities, especially since the COVID-19 pandemic continues to wreak havoc worldwide, including in our region, Southeast Asia. It seems that the end of the pandemic is far from sight, with new variants of concern emerging and the continued slow pace of vaccine rollout in low- and middle-income countries (LMICs). However, we believe that Indonesia can go beyond this agenda and be bolder. Indonesia is the first LMIC to chair the G20. With it, comes a rare opportunity to advocate for causes that most "big" countries tend to ignore. Global health resilience needs to be viewed beyond the traditional focus on health-care systems and instead, encompass the resilience of human societies and the natural ecosystems on which their health depends.

Global health needs to be viewed beyond the traditional focus on health-care systems and instead, encompass the resilience of human societies

New Opportunities for the G20

As the G20 chair, Indonesia has an opportunity to champion a planetary health approach. The medical journal The Lancet introduced this concept in 2015, stating that "planetary health is based on the understanding that human health and human civilization depend on flourishing natural systems and the wise stewardship" of those systems. This means that future pandemics or other diseases cannot be prevented if ecological problems such as climate change and biodiversity loss are not addressed.

Indonesia will be a credible leader in advancing the planetary health agenda. It is home to some of the most biodiverse ecosystems in the world, hosting 12 percent of the world's mammalian species—second only to Brazil. Concurrently, it is also a victim of a planetary health crisis. Indonesia is ranked in the top-third among countries at climate risk, with high exposure to all types of flooding and extreme heat. As an archipelago, Indonesia is also particularly vulnerable to sea-level rise. Jakarta, its capital city, is considered the "fastest-sinking city in the world," with almost half of the city now sitting below sea level. President Widodo recently announced that the government is moving the capital to the island of Borneo to create a new, more sustainable urban center.

If Indonesia is to become a planetary health leader, however, it must also tackle its contribution to planetary health damage. Even though deforestation is decreasing in Indonesia, it is still happening at an alarming scale; in 2020, the country lost 115,459 hectares of primary forest cover, an area about the size of Los Angeles. Despite its rich natural resources for renewable energy such as solar and tidal power, Indonesia is also still heavily reliant on fossil fuel-based energy. The government plans to continue building more than one hundred coal plants until 2023, which will continue emitting carbon for decades to come. Recently, the Stockholm Resilience Center announced that five out of nine planetary boundaries—processes that regulate the stability and resilience of the Earth as a system—have already been violated. One of them is the boundary for plastic pollution, as humans have produced more plastic than the Earth can support. Along with several Asian neighbors, Indonesia is among the top five countries releasing enormous amounts of plastic into the seas.

As the only G20 member of the Association of South East Asian Nations (ASEAN), Indonesia can be an influential spokesperson on behalf of its Southeast Asian neighbors who are all gravely at risk. Late last year, both the Philippines and Malaysia were affected by climate-related extreme weather events, including typhoons and intense flooding that killed hundreds of lives and displaced thousands more. And if deforestation and wildlife trade in the region are not addressed, the next pandemic may emerge from one of the jungles of Southeast Asia.

So what can Indonesia do leading up to and at the G20 Summit later this year? It can reframe health policy discussions, moving them toward a broader vision that encompasses planetary health security to ensure the health of people—one where humans and the planet thrive in harmony. For example, G20 states are responsible for approximately 80 percent of global CO2 emissions. Indonesia should press its colleagues to honor their 2021 United Nations Climate Change Conference (COP26) commitments, even raise their level of ambition by going beyond those commitments.

Fundamentally, Indonesia should also initiate an honest discussion about the future of our global economy, the main culprit of our planetary health crisis. Collectively, the G20 has the power to remodel the economy into one that respects the planet's boundaries while at the same time meets the basic needs of all humanity, not just the needs of some countries. The principles of the Doughnut economics model—a sustainable economic framework in which people and the planet are in balance—can provide a starting point for the discussions.

By being at the heart of planetary health, Indonesia would have the opportunity to be a planetary health leader, creating real and lasting transformation on a planetary scale. Putting planetary health at the center of its G20 presidency is not just a legacy for the people living today, but also one for the future children of Indonesia, Southeast Asia, and the entire world.


Jemilah Mahmood is the executive director of the Sunway Centre for Planetary Health and former Under-Secretary General for Partnerships at the International Federation of Red Cross and Red Crescent Societies.