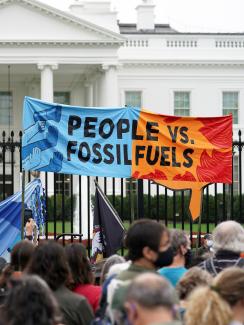 The United States emerged from the Cold War with unrivaled power, ideological influence, and technological prowess. It shifted from fretting about the balance of power to confronting transnational problems that were different from anything seen before—new types of extremist terrorism, pathogenic threats supercharged by globalization, the emergence of cyberspace, and climate change. Today, the loss of Afghanistan, the catastrophic pandemic, the rise of digital authoritarianism, and the climate change emergency suggest that, as Council on Foreign Relations President Richard Haass argued, the United States squandered its power, influence, and innovation for thirty years.

"As bad as the pandemic has been, climate change represents a more ominous challenge for the U.S. government's engagement with global health"

These foreign policy disasters are often explained as "failures of imagination." This trope is rather elastic; but, concerning transnational challenges in the post-Cold War era, it cannot mean a "failure to imagine." After 9/11, the United States imagined a "war on terror" and democracy-building in Afghanistan and the Middle East. It conceptualized "global health security" in the wake of the HIV/AIDS pandemic and other microbial threats. With cyberspace's emergence, the United States envisioned global "internet freedom." Confronted by transboundary air pollution and depletion of the ozone layer, the country did imagine collective action on global environmental problems that informed strategies on climate change.

Among these problems, climate change stands out because the United States has proved unable or unwilling to act with conviction. Concerning terrorism, global health, and cyberspace, the United States committed blood, treasure, and ideology for decades in pursuit of what it wanted. However, on climate change, it has whipsawed for nearly forty years between high-mindedness, hesitation, and hoax-ology, and sacrificed next to nothing in confronting a planetary threat.

On October 31, the twenty-sixth Conference of the Parties (COP26) to the UN Framework Convention on Climate Change convenes in Glasgow at a time when the climate change threat is worse than ever. As at earlier summits, COP26 will focus on mitigating greenhouse gas emissions. Every previous mitigation "breakthrough"—from the Kyoto Protocol to the Paris Agreement—failed to stem emissions. Input from health experts at and between COPs on the need to prevent health harms from climate change through mitigation made no difference.

What countries have announced in advance of COP26 has been panned as inadequate given the scale of historic and current emissions, the failure of past mitigation efforts, and the time needed to plateau and reduce greenhouse gas concentrations in the atmosphere. No leading emitter appears willing to make—or able to sustain on the timescales required—the immediate, radical emission reductions that are needed. Mitigation promises are less an acceptance that COP26 is the world's "last best chance" against climate change than they are more "blah, blah, blah," as activist Greta Thunberg lamented.

Mitigation promises are less an acceptance that COP26 is the world's "last best chance" against climate change than they are more "blah, blah, blah"

Under President Joe Biden, mitigation is again a U.S. priority. However, now as in the past, presidential climate change ambitions are fragile when they have little bipartisan support, face difficult prospects in Congress, and do not swing many votes in elections. Once upon a time, strong and steady U.S. leadership on mitigation might have turned the tide, but the decades that the United States squandered prevaricating over climate change makes the mitigation task at Glasgow far more difficult for the rest of this century and the next.

Episodic White House determination at periodic COPs is not evidence that the country is demonstrating conviction on climate change. Unfortunately, decades into the mitigation saga, the United States remains indispensable and indecisive. President Biden's approach to mitigation is serious, substantive, and sincere, but there are no moral victories with mitigation.

Imagine All the Adaptation

In her new book, The Fight for Climate After COVID-19, CFR's Alice Hill persuasively argues that policymakers must devote more political and economic capital to climate change adaptation. She communicates the scale of the problem and provides a blueprint for adaptation policies. In their contribution to this series, Hill and Madeline Babin unpack the health threats caused by extreme heat associated with climate change. In U.S. foreign policy on global health, adaptation is now the primary climate change challenge.

U.S. foreign policy has addressed adaptation in, for example, climate change financing mechanisms that help low-income countries with adaptation needs. Even so, adaptation has not been prominent in U.S. engagement on global health. With the health threats created or worsened by climate change no longer some future generation's problem, U.S. foreign policy on global health will have to take up this issue now and address it for decades to come.

But it will not be easy. In her book, Hill emphasizes that adaptation is a novel task for policymakers everywhere for which past efforts on health, environmental issues, and disasters offer few benefits and little guidance. Extreme heat can kill healthy individuals. Flooding can devastate environmentally progressive countries. Sea level rise can threaten communities that are prepared for hurricanes. Unlike the threats a pandemic pathogen or tobacco consumption poses across populations, climate-worsened health risks are diverse and manifest themselves in very localized ways—such as too little water in one part of a country and too much water in another—which requires a daunting array of national strategies, sub-national plans, and local capabilities.

The need for bespoke adaptation approaches will have to compete for visibility and funding with ending the COVID-19 pandemic, preparing for future pandemics, and continuing long-standing commitments, such as providing anti-retrovirals for HIV/AIDs. In this crowded mix, adaptation might not compete well. Many climate-related health threats, including extreme heat, resemble non-communicable health risks, which have not been priorities in foreign policy. Others, such as flooding, look like disaster relief and humanitarian assistance problems that often do not receive strategic foreign policy attention.

Getting adaptation on the foreign policy agenda also must compete with domestic needs. The United States is not prepared for the health threats that climate change creates or exacerbates at home. Achieving and maintaining adaptation resilience across the country will be expensive. As the pandemic highlights, democracies use scarce resources to prioritize protecting and helping their own people and economies. Attempts to provide significant U.S. funding to assist adaptation in other countries will face scrutiny over how such funding helps Americans who are increasingly at risk from extreme heat, drought, food insecurity, flooding, and sea level rise. Adaptation will not be the issue that ends what Haass called "the age of America first."

Imagine All the Getting Started

Near the end of her book, Hill recognizes the grim dilemma: "So how do we deal with a future that promises more climate-worsened catastrophes?" Her answer is to "get started" because, with climate change affecting everything, "there is no shortage of actions" to take using ideas that already exist. As difficult as it will be, domestic and foreign policies in the United States and other countries must get started on climate change adaptation.

How a recent heat wave is affecting Italy's longest river