After "Bloody January," Health and Safety in Kazakhstan Look Shaky

Wealth disparities in Kazakhstan have left holes in the health system 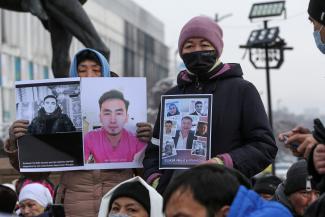 In Almaty, Kazakhstan, people hold a rally in memory of victims of the recent country-wide unrest triggered by fuel price increases, on February 13, 2022. REUTERS/Pavel Mikheyev
by Lillian Posner February 17, 2022

As the dust settles on last month’s protests in Kazakhstan, Kazakhstanis are now tasked with taking stock of the physical damage and grappling with the trauma of the violence that rocked their country. The protests, now known as "Bloody January," left 225 dead and thousands injured in the Central Asian nation. Moreover, the protests highlighted the broken social contract between Kazakhstan's ruling elite and the rest of the population and laid bare many of the vulnerabilities in its governance, particularly in the spheres of health and safety.

The protests highlight a broken social contract between Kazakhstan's ruling elite and the public, and laid bare vulnerabilities in governance

At the onset of the COVID-19 pandemic, Kazakhstan's oil-dependent economy suffered its biggest shock in twenty years. The subsequent economic recovery has been markedly unequal, as small businesses continue to suffer and prices for everyday staples skyrocket, while 162 people account for 55 percent of the nation's wealth.

In the wake of the protests, Kazakhstani president Kassym-Jomart Tokayev promised an economic reset. But Kazakhstan's January protests are just the latest iteration of a recurring pattern of protest and placation. Just as gas prices brought tensions to a boil in January, three years earlier, hundreds of mothers across Kazakhstan took to the streets to demand a better social safety net for their children after a deadly fire took the lives of five little girls who were attempting to stay warm using an unsafe wood stove. Their deaths struck a chord in the oil- and gas-rich country and highlighted recurring problems with building safety and poverty.

In response to the 2019 protests, then-president Nursultan Nazarbayev dismissed the parliament and instituted a package of reforms aimed at providing a safety net for low-income families. Tokayev's response to this January's protests mirrors this almost exactly. Even before calling in troops to quell the protests, Tokayev's first response was to dismiss the Kazakhstani government and announce the creation of a fund "For the People of Kazakhstan," to be financed privately by the Kazakhstani elite. The fund will, among other things, pay for the treatment of children with rare diseases, fund sports and recreation programs, and provide assistance to relatives of law enforcement officers killed in the unrest.

Kazakhstan has had many such funds, but the results have often been disappointing. In March of 2020, Nazarbayev announced the creation of a charity for COVID-19 relief, which he donated to personally and pressured the nation's elite to donate to as well. This form of "voluntary coercion," in which donations are subtly demanded from the nation's elite has been used repeatedly to redistribute wealth in Kazakhstan, but with few results. Nazarbayev's charity provided a flash of bonuses to health-care workers, masks for the poor, and in-kind assistance before fizzling out after three months.

Critics of the new fund have asked why Tokayev has created a non-governmental body to perform tasks that are normally the purview of the state. The choice may reflect the authoritarian state's fragile legitimacy. Rustam Kypshakbayev, a human rights activist living in Almaty, Kazakhstan's cultural capital, surmises that the creation of this and other such funds is a way for the government to levy taxes without upsetting the people. This reticence to institute unpopular policies was also demonstrated by the introduction of compulsory health insurance, which came into effect in January 2020. Previously, health care in Kazakhstan was provided to all citizens for free, but the switch to a single-payer system brought with it fewer free services. Additional care is only available to those who pay into the system. Although the policy’s intention was to generate funds for health care, in reality it has put health care out of reach for many self-employed and low-income people.

Kazakhstani authorities have repeatedly prioritized international prestige and investment over health outcomes. Following in the footsteps of Russia—which wraps around Kazakhstan’s north and northwest border—with the premature release of the Sputnik V vaccine, Kazakhstan hoped to score points at home and abroad with its own domestically-developed COVID-19 vaccine, QazVac. About 49 percent of Kazakhstanis have been fully vaccinated, but as Kazakhstani biologist Assel Mussabekova has pointed out, there is no way to know whether vaccination with Qaz-Vac provides protection since there’s no available data on its safety or efficacy.

The authorities' eschewal of evidence-based medicine and honest COVID-19 accounting has trickled down into other spheres of health care as well. A deluge of COVID-related misinformation and lax regulations has also fueled dangerous self-medication practices. Kazakhstani pharmacies abound with products that have no medicinal value but are heavily advertised by pharmaceutical companies. Because many pharmaceutical products are available in Kazakhstan without a prescription, many people have taken medical treatment into their own hands, taking pills and administering injections without the supervision of a doctor.

Despite the fact that antibiotics are not effective at treating viral infections, many doctors have continued to prescribe them as treatment for COVID-19, stoking fears among medical experts of antimicrobial resistance. Many of these drugs also have dangerous side effects and can be very expensive.

Gaps in the health-care system, including COVID-related delays in treatment and overwhelmed hospitals, contribute to Kazakhstan's excess mortality, which according to a study by the Institute of Health Metrics and Evaluation amounted to more than 80,000 deaths between March 2020 and May 2021 and put Kazakhstan in the top twenty worldwide for highest death counts.

As Kazakhstan moves forward from the January 2022 protests and continues to navigate the pandemic, its leadership will likely be forced to address the growing inequality between the oil-rich elite and the rest of the population. While the creation of a charitable fund attempts to address the disparity, it fails to consider peoples' concerns about health and safety or Kazakhstan's recurring pattern of protest and concession.

The January protests are just the latest iteration of the Kazakhstani people attempting to make their grievances heard. Until structural reforms allow people to participate in decision-making and hold their government accountable for its health, housing, and other major policies, the cycle will likely continue.