To narrow the immunity gap, China could be forced to prioritize its domestic vaccine needs 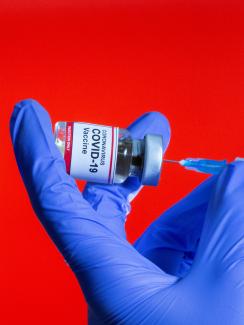 A woman holds a small bottle labeled with a "Coronavirus COVID-19 Vaccine" sticker and a medical syringe in front of a Chinese flag on October 30, 2020. REUTERS/Dado Ruvic
by Yanzhong Huang December 10, 2020

Last month when major global drug-makers announced the promising results of their phase III COVID-19 vaccine trials, it was a lifeline for Western countries still reeling from the pandemic — but it also shifted the geopolitics of immunity. On December 8, the United Kingdom became the first country to kick off a mass vaccination campaign, and the United States is expected to follow suit in the coming days. As many as 24 million Americans could be immunized by mid-January, and President-elect Joseph R. Biden has pledged to oversee 100 million vaccine shots in the first 100 days of his administration. If 70 percent of U.S. residents are vaccinated or have recovered from prior exposure to COVID-19 by May, the country could achieve herd immunity, rendering further person-to-person spread unlikely, and producing a return to normalcy in the fall of 2021.

These developments will compel China to accelerate production of its own experimental vaccines. On December 4, a senior Chinese official indicated the country would announce interim results for at least one of their phase III trials “in the coming one to two weeks,” and five days later, the United Arab Emirates announced that a trial mounted in the country for a Chinese vaccine found it provided 86 percent protection. A handful of other Chinese vaccines are also in the final stages of development.

If 70 percent of U.S. residents are vaccinated or have recovered from prior exposure to COVID-19 by May, the country could achieve herd immunity

But China’s capacity to manufacture the vaccines doesn’t seem poised to keep up with its immense need. According to a senior official of China’s National Health Commission, the country is projected to manufacture no more than 610 million doses of COVID-19 vaccines by the end of 2020 and one billion doses in 2021. Given that each patient will need two shots, if Chinese-made vaccines are solely for domestic use — and that’s a big if —China will be able to vaccinate about 805 million people, or 58 percent of its population, by the end of 2021. (The vaccines China is expected to purchase through the COVAX pillar will cover only one percent of its population). Even under the assumption that Chinese-made vaccines are close to 90 percent effective, China is unlikely to meet the cutoff for herd immunity for more than a year.

That is not good news for Chinese leaders. Perversely, the country’s rapid containment of the outbreak means few Chinese people have been exposed to the virus, so a significant share will remain vulnerable to the disease, even as people in the West acquire immunity through vaccines or infections. This “immunity gap” between the West and China could be epidemiologically and politically dangerous.

History shows how countries can wield “epidemiological superiority” against populations that lack prior exposure to a dangerous pathogen. In sixteenth century Europe, smallpox had chiefly become a children’s disease to which most adults were immune, but Native Americans had never been exposed to the disease and possessed no natural immunity. When the Spanish conquistadors arrived in the Americas, the virus they carried became their deadliest weapon, reducing indigenous populations by as much as 95 percent. Although it is unlikely Western countries could take such bald advantage of China’s epidemiological vulnerability to the virus that causes COVID-19, China may have to maintain stringent international travel restrictions to curb imported cases and to continue its “zero tolerance” policy for new infections — paradoxically leaving vaccines as its only means for achieving herd immunity.

The immunity gap could also pose a political problem for Chinese leaders who can no longer point to China’s “success” and Western countries’ “failure” as proof of the superiority of the China model. Instead, it may demonstrate the resilience of liberal democracies and their ability to self-correct in the face of major crises.

Smallpox, brought to the Americas by Spanish conquistadors, reduced indigenous populations by as much as 95 percent

Perhaps equally important, the immunity gap could undercut China’s aspirations to practice vaccine diplomacy, which would otherwise project its soft power and expand its international influence. At the World Health Assembly in May, President Xi Jinping promised that China’s vaccines would be a “global public good.” He did not elaborate what he actually meant, but a spokesperson of the foreign ministry said that China would use various means, including donations and free assistance, to give developing countries priority access to Chinese vaccines. Since then, China has pledged assistance to countries in Southeast Asia, South Asia, Africa, and Latin America.

This vaccine diplomacy is premised on the belief that because China has few cases, the domestic demand for COVID-19 vaccines is not so urgent, allowing the country to earmark a large share for international use. In September, George Gao, director of China CDC, said there was at present no need for mass vaccination in China because it had done a great job controlling spread of the virus. But since November, Western countries’ successful development of COVID-19 vaccines and the rollout of mass vaccination efforts has changed the calculus. To narrow the immunity gap, China may be forced to prioritize its domestic needs.

In lieu of providing developing countries vaccines, China could offer funds or loans, transfer technology, or boost local vaccine manufacturing capacity. But this could generate the impression that China has reneged on its promises. Some countries, like Myanmar, may end up relying on India or Russia for their vaccine needs instead. The gains of China’s vaccine diplomacy may be further undermined if the upcoming Biden administration takes a proactive attitude toward international cooperation over vaccine production and distribution, e.g., joining COVAX and/or providing financial assistance to lower- and middle-income countries to increase their vaccine access. In a nutshell, the vaccine could become a game changer for great power competition.