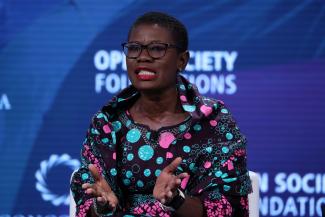 The past thirty years have been extraordinarily difficult for the West African country of Sierra Leone. After enduring a brutal decade-long civil war, the most widespread outbreak of Ebola in history, and a contraction in commodity prices that shrank the economy by more than a fifth, the country ranks near the bottom of the UN's Human Development Index. But Yvonne Aki-Sawyerr, who was elected mayor of the capital city of Freetown in 2018, meets those challenges with dynamic optimism.

A relative newcomer to politics, she spoke with Think Global Health about her strategy to transform the urban environment of the city, and the economics and politics that hem her in.

Think Global Health: Every mayor has a unique job because cities are so different. Could you provide some context about the constraints a mayor of Freetown is working within?

Yvonne Aki-Sawyerr: There are a number of differences between our situation and what would be typical for most of your readers.

It was Freetown's anniversary on March 11; our city just celebrated 230 years. The country of Sierra Leone was not a colony of Great Britain; Freetown was. So, the city had laws very much linked to the UK system, and then the rest of the country was a protectorate. It all came together as one at Independence in 1961. Why am I saying this? Because there was a tradition of independence of the city, which was lost when the Municipal Act was initially suspended in the 1970s and then during the war, just completely disappeared.

Fast forward to 2004: the war is over, and issues which provoked the war were being looked at, and out of that came the decision to put in place a Local Government Act, giving powers back to the cities. The tragedy is that Act—I walk around with a copy in my handbag [she holds it up]—was not implemented. A small number of fairly irrelevant functions have been devolved to local governments, the only really important one being sanitation. Urban planning, issuing building permits, land-use planning, zoning: none of that's with the city. So, we are in this crazy situation where anyone can do anything, and we don't even know.

Picture this: a city that had a population of 500,000 before the war and now has a population of 1.5 million. That's three-fold growth in thirty years, in the absence of development control. What you have is chaos, deforestation on a massive scale, 35 percent of the people living in slums because there's no planning, and major stress on all the infrastructure—from housing, to roads, to water. So, this was what I walked into in 2018.

Yvonne Aki-Sawyerr: What drove me to run for mayor was the state of sanitation and the environment. My background is consulting—that's problem-solving, by going down to first principles and having a clear path and outcomes. So, I approached my job as a mayor in the same way I would approach a complex risk-consulting or project management assignment. You want to do something? You need to be clear about your outcomes. So, we defined these targets: our development agenda, called Transform Freetown, is a four-year plan to address those fundamental challenges of the city in an integrated manner.

I had also taken part in Sierra Leone's response to the 2014 Ebola outbreak, and that experience taught me the importance of community engagement. If you want to make massive change, you need to really work with the people and they need to own whatever it is you're doing. Transform Freetown is data-driven but it's also very inclusive. On any given day, you will find in my office slum dwellers, traders, market women—because the people whose lives you want to change have to be part of that.

Think Global Health: How much progress have you made? And how apparent is that to the city's residents?

Yvonne Aki-Sawyerr: Transform Freetown has been hugely successful, in spite of our challenges, and every year we report on it. On a practical level, this was a city that was filthy in 2018, and is now clean. A city that was flooding every year prior to 2018, which now has a regular annual flood mitigation program. Out of a million trees committed in the strategy, we've planted 557,000, and in July we'll be planting the remaining 450,000. We're building a new three-story market. We're in the process of starting slum upgrades in two communities. We've got a feasibility underway for the cable car, which should be the first mass transit ever in the city. So yeah, Transform Freetown is touching lives.

Think Global Health: Why focus on the physical environment, and what consequences does that have for the health and well-being of the population?

Yvonne Aki-Sawyerr: So much of what we do is linked to health. Water provision in markets has been essential. In the open markets, women are sitting for eight, ten hours under the burning sun, and with global warming, those temperatures are just getting higher. We're trying to reduce the temperatures by planting trees, but that doesn't necessarily address all these situations, so we're introducing canopies over the markets.

Another example: we know that 82 percent of cooking fuel in the city is wood- or charcoal-based, and we know that women have a high level of respiratory disease—although a lot of it is undiagnosed—because of using these carbon-based fuels for cooking, often in close quarters. So, we are also working on cooking fuel alternatives.

And the informal settlement upgrades are improving health, not just because of sanitation, but due to the housing materials. Ninety-nine percent of people in informal settlements live in homes made of corrugated iron, which in the heat is like living in an oven. Being able to work on alternative materials… these are all physical interventions, but they all have public health impacts.

Think Global Health: Could you give us a sense of the resources available to you, and how you've tried to expand them?

Yvonne Aki-Sawyerr: When we came into office, property taxes, our biggest revenue source, were $1.25 per person. How do you collect property taxes if you don't know where the properties are coming up? So, we used satellite imagery to capture all the properties, measured rooflines, went out over a period of six months and collected features, used a computer algorithm to assess the properties. And, having come in with 37,000 properties on our books, we today have just completed distributing demand notes to over 107,000 properties. We have increased the revenue potential over seven times; from $640,000, we're now at $3.8 million.

Think Global Health: As if these weren't sufficient obstacles, there are political ones.

Yvonne Aki-Sawyerr: Being from a different political party than that in power nationwide, I'm an opposition mayor, who as we speak is a subject of four investigations. I'm the most investigated person in the country, probably in the country's history.

Think Global Health: So, there's a lot of conflict with the national government?

Yvonne Aki-Sawyerr: Unnecessarily, if you ask me. Because we're doing a good job with the support and collaboration of dozens of stakeholders, including some national ministries and agencies. And yet, I think individuals who choose to politicize governance, instead of working and being focused on development, seem to be obsessed with removing me from office.

Think Global Health: How would you rate the seriousness of those threats?

Yvonne Aki-Sawyerr: Very serious. The Global Parliament of Mayors issued a solidarity statement, and there are two or three others from women's groups. But the threats are very serious. The anti-corruption allegations are total nonsense but if I pay, then I admit guilt and am banned from office for three years, and if I don't pay, I can be charged in court under the anti-corruption law, and I'm automatically suspended from office.

Think Global Health: You are prominent in global networks of mayors. What do you see as the advantages and drawbacks of that international attention?

Yvonne Aki-Sawyerr: In order for us to do transformative interventions, we need to bridge a financial gap. One of the big advantages of a global platform is that one can reach out to funding sources that one might otherwise not have been aware of. The other major plus is learning. For example, I struck up a relationship with the mayor of Zurich, Switzerland, Corine Mauch, who's also on the Mayor's Migration Council; as a result, yesterday there were two consultants from Zurich here working on a project worth over two million Euros for our central business district. That comes from being in a position to network with other cities. Even with my neighbors in Monrovia, Liberia and Banjul, Gambia, we learn from each other all the time.

What would be the downsides? One has to be very careful about how much traveling you do. If you're being asked to speak everywhere, sometimes you need to decide to stay home, because the best way to fail to deliver is to fail to be present. Sometimes I have a tension there, of wanting to be out mobilizing resources, but also needing to be here to be part of ensuring that what we're already implementing is getting the time and attention that it deserves. And to support the excellent team that we have.

Think Global Health: What do you wish you'd known when you took this role?

Yvonne Aki-Sawyerr: I had never been in politics before and didn't understand the political dimensions, and how that could impact service delivery and project implementation. The obvious thing I could have done differently was to not have run for office. If I had known it was going to be this tough...it's good you don't know, right? But do I regret it? No. I don't regret it for a day.

Think Global Health: Have you discovered any new dimensions of your own abilities?

Think Global Health: What is the most important thing to understand about the endeavor of addressing health as a municipal leader?

Yvonne Aki-Sawyerr: Health requires a holistic, inter-sectoral approach. Building that into city government and city strategy is really an opportunity that we have made use of, and one that we would highly recommend. Yet, resources for public health often sit at the national level, and so much of what needs to be delivered in order to address public health challenges is local.