Go to homepage
Smoke and Mirrors in Bangladesh
Trade

Smoke and Mirrors in Bangladesh 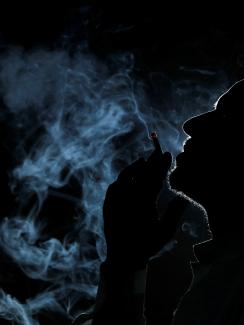 A man is seen in silhouette as he smokes a cigarette at his shop in Peshawar, Pakistan May 28, 2019. REUTERS/Fayaz Aziz
by Bungon Ritthiphakdee May 19, 2020

What are the end-products of undue corporate influence over public policy and decision-making that tip the scale of power away from governments and the people in favor of private interests? Government systems that benefit specific industries above their citizen’s own well-being. One classic and the best example of this manipulation is the tobacco industry—almost nobody does it better.

Other times, the tobacco industry’s direct interference with economic and public health policy is wide-reaching and sits very close to the surface

But how they do it varies from country to country. In some instances, tobacco companies throw their corporate weight behind one specific initiative but hide their involvement several layers below the surface. Such has been the case in Pakistan. The global tobacco industry has been suspected of using a front group to push the government's use of a cigarette tracking and tracing system that likely allows the industry to be secretly involved in cigarette smuggling. Other times, the tobacco industry’s direct interference with economic and public health policy is wide-reaching and sits very close to the surface. Bangladesh serves as a useful case study of the many ways powerful industries—and "Big Tobacco" especially—seek to exert influence in order to secure their profits. These examples serve as valuable lessons for other countries.

Lesson One: How the Industry Delays and Denies Proven Tobacco Control Measures

Raising taxes on tobacco products is one of the most effective means of reducing its use. So when the Bangladesh government attempted to tax bidis, locally made, hand-rolled tobacco products, the industry fought back.

To counter the tax increase, which would make their products more expensive and lead to declining sales, the Bangladesh Bidi Owners Association met with the Finance and Commerce Ministers to propose a tax reduction—essentially blocking it—and their influence succeeded. Bidi prices remained unchanged in the fiscal year 2018-19 budget, allowing the tobacco industry to deny the government greater tax revenues and to undermine an effective tobacco control measure.

In another instance, in 2016, the printing of graphic pictorial health warning labels on cigarette packages was pushed back two years after the Bangladesh Cigarette Manufacturers’ Association intervened. It won temporary permission from the law ministry to print the warnings only on the lower, less prominent part of cigarette packs.

The association succeeded again when they later petitioned the High Court for further delays. Because of this interference, the printing of graphic warning labels on the more prominent, upper part of packaging didn’t go into effect for another two years. Such delays allowed the industry to continue profiting from the status quo at the expense of public health.

The classic corporate approach for countering bad press is deflection and spin—a PR push. With plentiful evidence of the health harms of smoking, tobacco products have become stigmatized. The industry has to find deceptive ways to win back public favor, and often this comes down to their donating money to both tobacco- and non-tobacco-related initiatives.

By pointing to the role of organized crime in cigarette smuggling, the industry can divert attention away from its own involvement in the black market

In 2017, the Bangladesh Cigarette Manufacturers Association attempted to donate funds to the Bangladesh Customs Intelligence and Investigation Directorate to sponsor “Cigarette Smuggling Prevention Week.” As the tobacco industry has been found to be complicit in cigarette smuggling in order to pay fewer taxes, the press exposed this attempt, and the transaction was scrapped. But the industry found another way to exert its influence: the British American Tobacco company provided information to help reduce illegal cigarette trade to the Bangladesh National Board of Revenue, which oversees tax collection. Independent researchers and academics have criticized the reliability of industry-supplied information. By pointing to the role of organized crime in cigarette smuggling, for example, the industry can divert attention away from its own involvement in the black market.  Research consistently shows that the tobacco industry’s own cigarettes account for the majority—approximately two-thirds—of the black market.

Lesson Three: How the Industry Exploits Commitments to Avoid Conflicts of Interest

Currently, two former senior government officials serve as independent directors for British American Tobacco Bangladesh—one from the Ministry of Agriculture, and the other from the Ministry of Industries. These former government officials are more than just silver-tongued shills for the industry. They hold the golden tickets granting their tobacco company greater access to current government officials and the knowledge and connections to facilitate lobbying. Having former “insiders” on staff makes it that much easier for the tobacco industry to influence policy in favor of its profits, to the detriment of public health. A former senior Ministry of Industries official can persuade the government not to discriminate against international tobacco companies when setting tax rates.

The lessons from Bangladesh show the importance of commitments from the whole government (not just from the health department) to fighting corporate influence over public policy. When companies gain the trust and favor they seek, they get one step closer to having a seat at the policy-making table—and citizens’ interests fall to a distant second place. Curious about how the tobacco industry interferes with other governments around the world—and which countries are successfully enacting measures to counter this involvement? Read STOP’s Global Tobacco Industry Interference Index.

Bungon Ritthiphakdee is the executive director of the Global Center for Good Governance in Tobacco Control.