The Silent Spread of STDs During the Pandemic 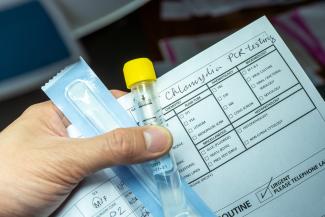 Before the arrival of COVID-19, just around the corner from some of the trendiest restaurants in downtown Philadelphia at a clinic at the Mazzoni Center, hundreds of people got screening and treatment for sexually transmitted diseases each week. People would stop by for condoms and the waiting room was often filled with 20 people or more.

The pandemic changed everything. "We don't even have a waiting room anymore," said Eric Paulukonis, the health center's director of prevention services. The center sees around 12 people a day now to keep patients and staff safe, less than a third of their former capacity. But Paulukonis notes that a shortage of sexually transmitted disease test kits means they couldn't even keep up with the pre-pandemic rates. The center has paused testing at least three times since October 2020 due to the shortages.

With COVID-19 grabbing so much attention, few resources are left over to combat other serious public-health threats, and sexually transmitted diseases have been among the most neglected. Chlamydia, gonorrhea and syphilis have spread markedly over the last five years, according to the Centers for Disease Control and Prevention. The most common STD, chlamydia, reached 1.8 million cases in 2018, almost 20 percent higher than four years earlier. That year there were also a half million cases of gonorrhea, the highest since 1991.

"These infections can also have very negative health outcomes," said Dr. Sarah Wood, who focuses on adolescent care and STDs at Children's Hospital of Philadelphia. "An untreated chlamydia or gonorrhea infection can lead to infertility, it can lead to chronic pelvic pain. We need to think about what is the effect of that across the lifespan."

When 2020 statistics arrive, they will provide an incomplete picture of the actual caseload because testing has dropped so dramatically. As lockdowns began in spring of 2020, clinics closed and non-urgent clinic visits were cancelled all over the world. Researchers in Rome recorded an immediate drop in STD diagnoses, a departure from rising numbers they'd seen in the earlier months of 2020. In July 2020, the World Health Organization reported COVID-19-related STD service disruptions in 16 countries ranging from China to Guatemala to Botswana.

The rates of testing in the United States have painted a similar picture. Dr. Maria Trent, chief of adolescent and young adult medicine at Johns Hopkins Medical Center, estimated that the number of STD tests conducted by Maryland health department clinics fell from thousands a month to just 107 in May 2020.

STDs didn't suddenly stop spreading but laboratory supplies once used to test for them have been diverted to addressing COVID, and STD outpatient clinics have been seeing far fewer patients because of COVID-related restrictions. These challenges have deprived the public health system of routine screening, one of the most effective tools for combating infections.

As lockdowns began in spring of 2020, researchers in Rome recorded an immediate drop in STD diagnoses

Lockdowns, social distancing, and other measures to combat COVID-19 have not discouraged sex, especially among young people. In forthcoming research, Dr. Trent and co-authors surveyed 194 young adults in Baltimore, Maryland, showing that about 8 out of 10 were sexually active during the stay-at-home order. Less than half surveyed reported condom use, which is concerning given that adolescents make up a quarter of the population but account for almost half of sexually transmitted infections, according to the CDC.

Since some people can be infected with STDs without showing symptoms, routine screening is an important part of diagnosis and prevention. Screening for STDs in non-pandemic times can be as simple as asking every teenager who visits a clinic to provide a urine sample, no questions asked. Without an in-person visit, though, collecting that sample poses a bigger challenge.

"Our options are quite limited to telling a teen to come to one of our clinics where we do family planning and leave a sample there, which may be half-an-hour from the teen's home," said Dr. Wood. "That has its challenges because it opens up many spaces for breaches of confidentiality."

Many of Dr. Trent's patients in Baltimore used to get regular care at school-affiliated clinics, but most schools in the area are now closed. The result is that patients now show up at doctors' offices with more advanced infections

Despite the STD testing kit shortage, Dr. Trent notes that the clinics she works with have not had to pause testing for their patients. But in other health systems in the United States, the STD testing kit shortages nearly blindsided clinics, forcing them to rethink how they test patients and how they allocate testing inventory across affiliated clinics, which was the case at the Children's Hospital of Philadelphia.

"It all sort of happened at once," said Dr. Wood. "Suddenly, without anyone knowing it was happening, we had gotten to critically low supplies at a few of our high-volume testing clinics."

The team at the Children's Hospital of Philadelphia initially responded to the shortage by encouraging pediatricians to treat patients without testing, or to conduct tests with available but more complicated vaginal or urethral swabs instead of the now scarce urine test. The hospital also began managing test inventories at associated hospitals and clinics at a centralized laboratory, rather than having clinics order them independently, a practice it plans to continue.

Doctors at New York Presbyterian Hospital's Young Men's Clinic only noticed the shortage of STD testing kits all of a sudden around December. While the clinic still offers to test patients with the more invasive and uncomfortable urethral swab, medical director Dr. David Bell said he did notice more patients refuse that test if they were asymptomatic. Yet as many as 90 percent of chlamydia infections in men are asymptomatic.

When testing is not an option, the CDC advises physicians to treat patients who have STD symptoms like vaginal or urethral discharge with antibiotics.  But such treatments create risks as well. Other conditions can cause symptoms similar to STDs, and without testing, patients can be exposed to antibiotics unnecessarily, leading to antibiotic resistance strains of infections. The CDC reports that growing antibiotic resistance has left only one class of antibiotics effective for treating gonorrhea.  With less testing and treatment without diagnosis, antibiotic-resistant gonorrhea could become more widespread. Treating patients with antibiotics also exposes them to side effects and allergic reactions to medications they may not even need.

Availability of STD testing supplies has recently improved in some parts of the United States, and clinics are allowing more visits. Even so, challenges remain in testing and treating STDs in the face of ever-rising numbers and the priority being given to COVID-19. Physicians like Dr. Wood and Dr. Trent worry about the long-term impact of the lack of testing and identification of infections.

"I don't think any of us knew how fragile our system was until this happened," said Dr. Wood. "It would have been unthinkable to me a year ago that we couldn't order gonorrhea and chlamydia test kits, or that contact tracing in many parts of the country would have ground to a complete halt. It just makes you realize how interconnected the various elements of our health system are."

Angela Castellanos is a Boston-based pediatrician.