Go to homepage
Separated by a Common Infection
Governance

Separated by a Common Infection 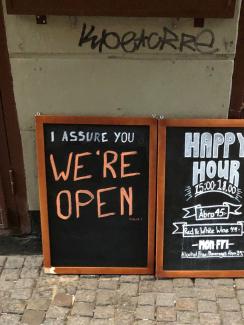 In a country that didn’t lock down during the coronavirus pandemic, a sign assures people that the bar is open during the COVID-19 outbreak—outside a pub in Stockholm, Sweden, on March 26, 2020. REUTERS/Colm Fulton
by Amar Bhidé and Leif Pagrotsky May 6, 2020

Unprecedented lockdowns and quarantines to combat the COVID-19 pandemic have evoked emotional disagreements, both between and within different countries. Yet, the consequences of this or any future pandemic depend as much on responses and capabilities on the front lines as on high-level policy choices.

Italy, the first Western country to impose comprehensive lockdowns, has suffered high casualties, especially in its northern regions. Yet, the COVID-19 strain in Italy isn’t more virulent or its victims innately feebler: as elsewhere, deaths are concentrated among the elderly who already have serious conditions such as heart disease or chronic bronchitis. What has happened instead is that COVID-19 has amplified the longstanding vulnerabilities of an overcentralized health-care system. Efforts to cut costs have favored large hospitals—which are believed to enjoy the economies of scale in their large operations—over family practice physicians. Therefore, people who didn’t need emergency or intensive care and who might have otherwise sought treatment from a nearby general practitioner have turned up en masse and overwhelmed hospitals. Moreover, large hospitals controlled by a remote and bureaucratic health ministry couldn’t easily adapt to the unexpected surge in demand for their facilities.

Right next door in Switzerland, which delayed imposing even social-distancing rules and has not enforced lockdowns, people didn’t overwhelm hospitals. Rather those who didn’t need hospitalization remained at home under the care of trusted family physicians—supported as necessary by specialists. And public hospitals, which enjoy considerable autonomy, ramped up their intensive care facilities five-fold in a matter of weeks—without reducing beds available for normal admissions and operations.

In spite of high infection rates, many ventilators in the state’s hospitals remain unused

German restrictions on the economy, designed and policed by regional governments, have been among the lightest in Europe. Infections rates have been high—Germans on holiday in the Austrian alps brought back the virus. But “a dense net of hospitals and labs” and a decentralized health-care system controlled by regional governments have kept death rates remarkably low. For instance, the state of Baden-Württemberg, ruled by a cross-party alliance, quickly set up COVID-19 treatment clinics that helped prevent the virus from entering the hospital system. Factories were encouraged to adopt safety measures but not asked to shut down. And in spite of high infection rates, many ventilators in the state’s hospitals remain unused.

Formal restrictions further north in Sweden are even lighter. The rules permit gatherings of less than fifty people (but not large concerts and public performances), and they allow restaurants to serve seated guests (but must close smörgåsbords). Instead, the Swedish government has relied on urging the elderly to remain home and others to follow social distancing guidelines.

Life is far from normal: domestic travel has nearly stopped and streets in large cities seem deserted. But many people do go to work every morning—using public transport that can be dangerously crowded. Important parts of the economy continue functioning. Volvo, which had shut down its other plants across Europe, has resumed production in Sweden. The country has apparently not sacrificed lives for money: per capita deaths in Sweden are lower than in many countries which have implemented strict lockdowns—but higher than in other parts of Scandinavia. Public hospitals have, as in Switzerland, adapted quickly: Rapid increases have produced a surplus of intensive care capacity available for hospitalized COVID-19 patients. Tents erected to provide emergency care remain empty.

High death rates of the elderly living in nursing homes do stain the Swedish record. And even here the problem may lie in specific on-the-ground choices rather than a lenient national strategy.

Nursing homes have long been tightly regulated and visitors were banned early in the COVID-19 outbreak. But municipalities, who have responsibility for elder care, have often outsourced the management of nursing homes to poorly supervised private operators. And, their often low-paid and temporary staff have infected nursing home residents. Local authorities have also failed to communicate with immigrant communities who don’t follow Swedish news. Many elderly Somali immigrants in heavily segregated Stockholm suburbs, who may not have heard about the need to self-isolate and who often live in crowded, multi-generational apartments, have been victims of COVID-19.

Apparently, autonomy is necessary but not sufficient for effective local action.

As in any large private or public hierarchy, subordinates are loath to challenge their bosses

But federal Medicaid and Medicare programs play a crucial role in shaping U.S. health care. More subtly, credible expertise in health matters also is concentrated in federal organizations such as the Centers for Disease Control and Prevention (CDC) and the National Institutes of Health (NIH). These national organizations have narrow technical remits and tend to produce standardized policies that may not suit all local conditions and values. Moreover, as in any large private or public hierarchy, subordinates are loath to challenge their bosses. And health officials and politicians in the states don’t have the standing to question the pronouncements of distinguished federal experts—while ordinary folk who mistrust remote edicts protest in the streets.

The U.S. response to COVID-19 is therefore squeezed between governance designed to accommodate its great diversity and the challenges of a virus that ignores state and national borders.

Additionally, miscalculations, a mishmash of federal and state rules, perverse incentives, and lax oversight have produced widespread shortages of essential medical gear. Many hospitals carried no emergency reserves of protective masks. Some hospital chains that had stockpiled masks after the 2009 swine flu epidemic hadn’t replaced elastic bands that became brittle with age. Inattention to the little stuff has produced big problems. Perhaps a “total war” is the best way to repulse or forestall pandemics—if some omniscient generalissimo could dictate a grand strategy. In reality, even brilliant strategists can make terrible mistakes, as Napoleon’s catastrophic march on Moscow shows. And, differences of opinion, interests, and acceptable tradeoffs make discord inevitable. Therefore, whatever overall strategies top leaders and officials might favor, front-line preparedness and local hustle remain crucial.

Amar Bhidé, a professor at Tufts, will teach a course on transformational medical innovations at Harvard Business School next year.


Leif Pagrotsky served as minister of industry and trade of Sweden and most recently as the country’s consul general in New York.