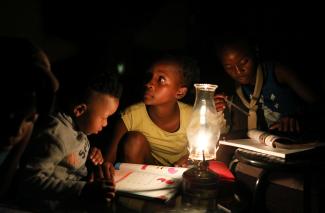 Children look on as they use a parafin light to study during an electricity load-shedding blackout in Soweto, South Africa, on March 18, 2021. REUTERS/Siphiwe Sibeko
by Nadine Nanji June 7, 2022

Power is a fundamental need in the modern world. The neglect or lack of a dependable electrical power system can destroy the economic growth of a country. An inadequate and unreliable supply of power can also take down a country's health system.

While South Africa's primary electricity supplier, the public utility Eskom, completed the construction of 14 new power stations between 1961 and 1991 and kept up with economic expansion in South Africa at the time, during the past 20 years, Eskom only completed the construction of one power station. As demand for power has increased, the company has not been able to keep up and it is using the practice of "load-shedding" to ration power. Load-shedding involves the interruption of electricity supply to avoid excessive load on a single power plant—and it is particularly disruptive to medical systems, and can put patients at risk.

To add to its power woes, South Africa has been hit hard by the COVID-19 pandemic. The country has recorded more COVID-19 cases than any other country in Africa to date—close to four million. The increased need for medical care brought on by the pandemic, coupled with frequent daily power cuts during much of the latter part of 2021 and throughout early 2022, has pushed many of the country's hospitals to their limits.

A rural district hospital in the Eastern Cape, for example, experienced 127 hours per month without power between September 2021 and February 2022. This included a 48-hour stretch without electricity at one point. Managers of the hospital relied on diesel to keep back-up generators running so that the hospital could function—a costly endeavor, adding thousands of dollars a month to the hospital's energy bill and increasing wear and tear on the generator. Generally, it's also difficult to continually source diesel to keep rural hospital generators running.

Long power outages and power surges can take a toll on hospital equipment and lead to mechanical failures, as well. And for some hospitals, emergency back-up does not always kick in during blackouts and load-shedding. Patients in intensive care and the operating theater are particularly at risk.

“In cases where there is a power outage, they will do their level best if they were in the middle of a procedure so that a patient could survive, especially when it is obvious that the patient’s life could be compromised if they don’t intervene and electricity won't come back," Sibongiseni Delihlazo, a spokesperson for the Democratic Nursing Organization of South Africa, told the Daily Maverick.

South Africa's main power supplier, Eskom, has struggled to keep up and is using the practice of "load-shedding" to ration power

COVID-19 vaccination is also at risk of disruption by power outages because refrigeration is required to store the jabs. And digital systems used to track vaccination are thrown off when load-shedding occurs.

In addition to power cuts, South Africa’s health system is suffering from climate-related water shortages, patient needs that exceed the health-care systems' capacity, social and health inequities tied to the country's long history of apartheid—all against the backdrop of a nation that is coping with recent political and economic upheaval.

Because Eskom owns most of the power stations in South Africa and supplies 95 percent of the country’s electricity, and because there are few alternative power sources, such as renewable energy, most hospitals and health-care facilities have no other options for power. The health-care system in South Africa needs to collectively come up with innovative solutions so that health care is not interrupted. Perhaps those solutions lay in engaging non-governmental organizations.

Nadine Nanji is a public health researcher and is currently working as a COVID-19 consultant with EQUINET/Tarsc. She recently completed her Masters in Public Health (health systems and policy specialization) from the University of Cape Town, in South Africa.