Plastics Are Just the Tip of the Iceberg

Living in a world swimming in synthetic chemicals 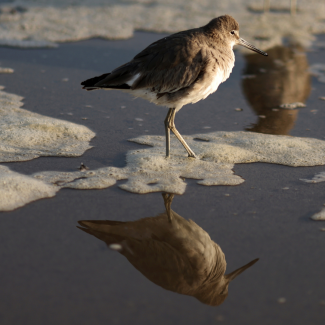 "The tip of the iceberg" is an aphorism derived from the density differences between fresh and saltwater that leave a tiny fraction (~10 percent) of icebergs bobbing above frigid polar waters. It is easy to be awestruck by the twinkling architecture of these frozen, floating mountains. But as mariners know, you must not forget what lies beneath.

This analogy is fitting for our world, which is awash in unseen, and largely unknown, synthetic chemicals. As a researcher studying oceanic plastic pollution, I was once so awed by plastic pollution that I didn't consider a much larger issue looming just below the surface. Plastics are a catalyst for discussion about the even bigger concern—the overuse and under-regulation of synthetic chemicals in the modern world, an issue that flies under the radar for most people.

Plastic itself is a fairly inert substance—just a simple, repeating hydrocarbon chain. One main reason "plastics," as we know them, are dangerous is because of the chemical additives put into them before they reach the consumer; chemical ingredients that reduce flammability and increase durability and flexibility. These chemical additives can make up more than half the weight of the plastic product that reaches the consumer.

But it's not just plastics. These chemicals are added to electronics, clothing, cookware, food packaging, cleaning products, furniture, makeup, children's toys, and many other products. One of the major producers of these chemicals, DuPont, used the slogan, "Better living through chemistry" during the twentieth-century. While these myriad chemicals have made our day-to-day lives easier, there is an environmental cost to that convenience.

There are hundreds of thousands of these chemicals grouped into categories, including plasticizers (phthalates), per- and poly-fluoroalkyl substances (PFAS, termed "forever chemicals"), UV stabilizers, flame retardants, and many, many others. Even though they are part of our everyday lives, they are not regulated in the same way that food and drugs are.

In the United States, the Food and Drug Administration (FDA) carefully regulates all products designed to go inside the body—such as the mRNA COVID-vaccines engineered and deployed during the pandemic—and they require a demonstration of safety before they can be released for public consumption. This approach is known as the precautionary principle. But the same demonstration of safety is not required for the compounds that coat our cookware, encase our food, and cover our bodies. The FDA has no jurisdiction over chemicals that are not intended to enter our bodies. But the chemicals that companies like DuPont and others produce don't respect our bodies' borders.

For more than a century, scientists have been finding plastics and other synthetic materials in places they don't belong: tetraethyllead (TEL) from leaded gasoline in the air, chlorofluorocarbons (CFCs) from industrial refrigerants eroding the planet's ozone layer, and plastics in nest-bound albatross chicks on the world's most remote islands are three popular examples. While these examples may seem disparate, an analogous situation is currently happening. The chemicals that chemical companies produce in inconceivable amounts permeate our air, food, and water. The health effects of these compounds are usually not fully understood, either because their health risks have not been adequately tested, or because the health risks are known, but actively concealed by the companies that produce them. Many of these synthetic chemicals are inside your body as you read this.

Phthalates, compounds that increase the flexibility of plastics, readily leach out of the products they're used in, and scientists find them in the blood, urine, and sweat of most people in high-income countries. These endocrine-disrupting compounds have been linked to cratering sperm counts over the past half century, and associated challenges in conceiving. Most phthalates, except for a few compounds (including, diethylhexyl phthalate or DEHP), in a few states (Washington, California, and Vermont) are not regulated. Therefore, the companies that produce them are not doing anything illegal by incorporating high levels of phthalates into their products, but also, often they aren't required by law to fully vet chemicals for environmental and chronic impacts.

For more than a century, scientists have been finding plastics and other synthetic materials in places they don't belong

The story is much the same for PFAS, the "forever compounds." The PFAS family includes over 9,000 individual compounds (and growing) that are found in nonstick pans, waterproof clothes, and firefighting foam, among thousands of other industrial and consumer products. As their colloquial name suggests, they are among the most stable organic compounds on earth due to the strength of their carbon-fluorine bond, which allows persistence in the environment for thousands of years. Two of the first mass-produced PFASs, perfluorooctanoic acid (PFOA) and perfluorooctane sulfonic acid (PFOS), have been linked to cancers and have subsequently been added to the Stockholm Convention of Persistent Organic Pollutants. These select PFAS are carefully regulated or outright banned in most Western nations. However, PFAS as a broader group are chronically underregulated.

When one PFAS compound is banned or regulated, the companies that produce it engineer another with a slightly different chemical structure that is typically as, or even more, harmful as the compound it replaced. This concept is known as "regrettable substitution." The solution to regrettable substitution is regulation at the compound-class level, as was done in the United States for PCBs and DDTs. Some U.S. states, including Maine, have taken this one step further and have banned all products containing PFAS by 2030. For most other states there are no regulations—or very limited ones—for the vast majority of PFAS compounds, and they continue to accumulate in human tissues and the environment.

It is an all-too-common pattern that when plants, animals, or humans fall ill in ways indicative of chemical pollution, that scientists then spend months or years trying to elucidate the basic specifics of the chemical causing the harm—even when there is a known point source. Worse, manufacturers don't need to disclose which chemicals are in which products and at what concentrations. Even more concerning, many manufacturers don't even know PFAS compounds are in their final product because of how convoluted supply chain dynamics can be. This means that, unlike plastics, it is nearly impossible for people to opt out of immersing themselves in these chemicals and supporting the often irresponsible chemical companies that produce them for profit.

There is a proven blueprint for how to navigate this toxic morass. There is an expansive list of synthetic chemicals—including DDTs, PCBs, TEL, and CFCs—that have since been banned or heavily regulated because of their known harms to environmental and human health. Plastics are in the midst of their global reckoning, and the result will hopefully be a world with less plastic pollution in the coming decades. As with the scourge of plastic pollution, the first step in changes in policy and behavior is awareness.

What to do next? Share this article and the links embedded within, write to your local or national representatives and demand that reasonable precautions, such as class-based regulations, are taken when chemicals are released into the world. Don't be me: too distracted by the glimmering tip of the iceberg to notice the threat that lies beneath.

Microplastics are everywhere, including our bodies