Go to homepage
The Pandemic That Never Went Away
Poverty 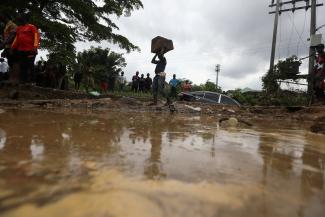 A man carries a piece of wood after the flooding which destroyed several homes at Trademore estate Abuja, Nigeria, on September 13, 2021. REUTERS/Afolabi Sotunde
by Emmanuel Agogo October 12, 2021

Nigeria and cholera have a history. It is one of forty-seven countries globally where cholera outbreaks result in an estimated 2.9 million cases and 95,000 deaths each year. In 2021, there has been a deadly outbreak of cholera in Nigeria. By the end of September, almost 90,000 suspected cases were recorded, with more than 3,000 deaths, mainly in children ages 5 to 14 years. It's added up to a fatality rate of 3.5 percent.

The illness, which strikes the intestines, is caused by a bacteria called Vibrio cholerae that leads to diarrhea and vomiting and in some people, severe dehydration. It's mostly found in areas with poor quality drinking water and sanitation systems. It spreads mainly via water and food that has been contaminated with infected human waste.

Cholera isn't the only disease Nigeria contends with. Simultaneously this year, there have been 3,200 suspected cases of Lassa fever reported, with a fatality rate of 20.7 percent among the 382 confirmed cases; and to date, 206,138 cases of COVID-19, including 2,723 deaths, have been recorded in Nigeria with a case fatality rate just over one percent.

By the end of September 2021, almost 90,000 suspected cholera cases were recorded in Nigeria

In Nigeria, an estimated 14 million people live in cholera hot spots—geographic locations where environmental, cultural, and socioeconomic conditions facilitate the transmission of the disease and where cholera persists or reappears regularly. Cholera control is a matter of emergency response when outbreaks occur; however, the condition is driven by underdevelopment where the disease is endemic.

No part of the country is spared. Twenty-nine out of the thirty-six states of the federation and the federal capital territory have had clusters of reported cases; and just under half (45 percent) of the 774 local government areas across all the geopolitical regions of the country have reported at least one case. However, three states —Bauchi (19,337 cases), Kano (11,952 cases), and Jigawa (10,758 cases)—account for 48 percent of all cumulative cases. The majority (92 percent) of the reported cases have occurred in ten states, mainly in the drier northern part of the country.

Distribution of Cholera Cases in Nigeria

The drivers for cholera have remained constant for the last two millennia. While western countries eliminated cholera due to improved access to potable water, improved sanitary practices, and better living conditions, sadly, these basic conditions do not exist in most lower and middle-income countries. Although the economy of Nigeria is the largest in Africa, inequality is significant, with a reported Gini coefficient—a measure of the distribution of income across a population—of 35.1 and almost 90 million Nigerians (41 percent) of the population living in extreme poverty.

The most recent Water, Sanitation, Hygiene (WASH) National Outcome Routine Mapping conducted in 2019 in Nigeria showed abysmal WASH indicators. Only 14 percent of the population had access to safely managed drinking water supply services, ranging from 2 percent (Northeast) to 31 percent (Southwest), and from 7 percent in the rural population to 29 percent for urban dwellers. It found that two-thirds of Nigerians use drinking water supplies contaminated by thermotolerant coliforms—bacteria often used to measure fecal pollution—and about a quarter of the population (23 percent) or 46 million people still defecate in the open. Only one in ten household heads were able to demonstrate proper handwashing techniques with soap under running water. Across the country, only 28 states had functioning public water utilities, with a 35 percent utilization capacity.

The Nigerian response  to the cholera outbreak has been coordinated by the Nigeria Centre for Disease Control through a multisectoral approach comprised of the Federal Ministry of Health, the Federal Ministry of Water Resources, the Federal Ministry of Environment, as well as partners such as the World Health Organization, UNICEF, Doctors Without Borders, the International Red Cross, and others. The response has been challenged by a number of factors, including patient access to health facilities, health-care worker post pandemic fatigue, lack of prompt diagnosis (particularly, limited bacterial culture and molecular confirmation), delays with access to global stocks of vaccines and other medical supplies needed to manage cases.

Fortunately, cholera outbreaks are predictable and preventable and there is a global effort to eradicate cholera by 2030 being championed by the Global Task Force on Cholera Control. They have proposed three strategic axes which are central to the strategy. These include early detection and quick response to contain outbreaks early; a multisectoral approach to preventing cholera in hotspots in endemic countries; and an effective coordination mechanism for technical support, resource mobilization, and partnership at the local and global level. This approach focuses on reducing mortality from cholera by 90 percent through the implementation of strategies to improve basic WASH interventions, more sensitive early warning mechanisms, stronger health systems, and faster access to cholera vaccine stockpiles.

In addition to the three axes, at the country level, other additional interventions are needed. Citizen advocacy for greater accountability by governments to provide safe drinking water supply services is crucial. Structural and cultural factors that promote open defecation need to be addressed. The failure of effective urban planning leads to the creation of slums with overcrowded and substandard housing. Overcrowding and substandard housing has been a major impediment to implementation of public health social measures in Nigeria.

Environmental health is the weakest component of the One Health system in Nigeria and requires investment to develop the capacity to monitor the living conditions and environmental hygiene of the rapidly growing population of Nigeria. The recently launched National Policy for Food System and Implementation Strategy indicates that it is time for implementation and not mere rhetoric. It is critical to strengthening the environmental public health systems and improving environmental surveillance.

Modern water conserving agricultural practices need to be introduced to reduce the water cost of animal husbandry and to improve multi-season farming. The incessant attacks on rural communities due to clashes between itinerant herdsmen and farmers continue to worsen insecurity in the country. The internal displacement of millions of people due to banditry, the intransigent Boko Haram insurgency and regional agitation stalls effective planning and development of the needed clean water and sanitation infrastructure.

The impact of climate change is being felt in Nigeria, as well, with an increased incidence of flash flooding coupled with a rapidly progressing desertification of the northern part of the country. There is progressive unregulated deforestation in the south and pollution of potable water sources. These factors will lead to worsening water shortages in the near future, which will increase the likelihood of further outbreaks of cholera.

Nigeria is projected to have the third largest population in the world by 2050. The time for a concerted action to address these complex interconnected factors is now. The cholera outbreak is a reminder that "unvanquished foes" can come back to haunt you.

Emmanuel Agogo is the Nigeria country representative for Resolve to Save Lives.