The U.S. capital's opioid crisis is fueled by a lack of comprehensive public policy 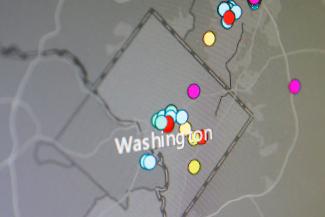 The U.S. opioid epidemic is hitting tragic highs. Last year, more than 80,000 people died of an opioid-related overdose, and mortality is only expected to increase in the coming years. One city in particular is struggling to cope with the public health burden of opioid addiction: Washington, DC. An increasingly tainted drug supply and a poorly implemented set of public health policies have made the nation's capital a hotspot for fatal overdoses.

The Origins of the U.S. Opioid Crisis

The modern opioid epidemic has undergone three waves. The first began in 2000, largely driven by the overprescription of semisynthetic opioid pills such as oxycodone. A decade later, the second wave started when people who use opioids moved away from pills and toward heroin, particularly heroin injection. Sold on the street and requiring no prescription, heroin offered a simpler alternative to meet growing dependencies difficult to satisfy with pills alone.

In 2014, the introduction of synthetic opioids into the drug supply initiated the third and ongoing wave. Synthetic opioids are easy to make, cheap to produce, and exponentially more potent than their non-manufactured counterparts. Fentanyl is the most prevalent of these illicitly made opioids; about 100 times stronger than morphine, it was associated with 82 percent of opioid-involved deaths in 2020.

In the U.S. capital, the rate of opioid-linked overdoses has increased steadily since 2018, with a majority of fatalities involving fentanyl or its chemical analogues. A recent report from the city's medical examiner's office showed that 95 percent of fatal overdoses involved fentanyl in 2021—up from 62 percent in 2016. As of June 2022, the rate of opioid-involved overdoses in Washington, DC, is second only to West Virginia, the state largely considered to be the epicenter of the epidemic. All signs point to the U.S. capital as a city especially vulnerable to the opioid crisis.

Rate of Overdose Deaths in 2020 by State and Drug Class

Why Washington, DC, Is an Opioid Hotspot

One reason for the city's susceptibility is its distinct population characteristics of people who use opioids. "[In Washington, DC] overdoses often involve people who have been using heroin for decades, and are now unable to control their drug supply,” explains Elana Rosenthal, a physician-researcher studying opioid use disorder. This population is more likely to accidentally overdose, as the drugs to which they have grown accustomed have suddenly become deadlier. The older demographic also helps explain the high rate of repeat overdoses; people with long-term opioid addictions are more likely to have previously overdosed at least once.

The city's opioid problem is also racially distinct. The average person who uses opioids in Washington, DC, is Black and between the ages of 55 and 64—different from the national average, which is white, and between the ages of 35 and 44. Black residents make up only 45 percent of the city's population but 85 percent of opioid-related deaths; most emergencies relating to opioid overdoses occur in areas where the majority of residents are Black. Studies show that Black individuals are more likely to distrust health institutions due to a long legacy of racialized medical abuse, including the tragic Tuskegee Syphilis Experiment and the case of Henrietta Lacks. This means that those most likely to suffer from opioid addiction in Washington, DC, could be the least likely to seek care.

Yet the city's opioid problem goes beyond demographic dynamics—it is also fueled by a lack of comprehensive public policy. A 2018 Washington Post investigation revealed that the city's government had misspent millions of dollars from federal grants meant to fund naloxone distribution—an opioid antagonist capable of reversing overdoses—and addiction treatment programs. This mishandling undermined intervention efforts citywide; 88 percent of overdose fatalities in 2020 had at least one opportunity for intervention, meaning one or more chances were missed to link the person to appropriate care or to perform life-saving actions when the overdose was discovered. An institutional failure to recognize complicating circumstances—including current treatment for substance use, prior mental health diagnoses, or recent release from carceral settings—compounded the crisis.

Moving Beyond Reactionism Toward Harm Reduction

Following the 2018 investigation, Mayor Muriel Bowser's office launched LIVE. LONG. DC., Washington's strategic plan to combat the opioid epidemic. When the plan failed to stem the rise of overdoses and opioid-related fatalities, it was rebranded as LIVE. LONG. DC. 2.0 in March 2021. The updated strategy promised to improve access to overdose-reversal kits, increase support for syringe-exchange organizations, and support at-risk communities. The program went so far as to offer free transportation to and from treatment facilities and ship overdose reversal kits to residences; it even funded a public relations campaign on pizza box covers and coffee sleeves promoting naloxone availability. Despite these renewed efforts, 2021 was a record-breaking year for fatalities in Washington, DC—more than four hundred people died of an opioid-related overdose.

According to Rosenthal, the solution to tackling the opioid crisis in Washington, DC, is expanding access to patient-centered treatment. "There is not enough to support people who use drugs with evidence-based care," she notes.

At present, the city's policies rely too much on overdoses as a trigger for action; only once someone has overdosed are they identified as needing assistance. A step forward would be to step up prevention efforts beyond education campaigns and ads on pizza boxes—connecting with people who use drugs before they overdose.

Rosenthal is an advocate for supervised consumption sites, where people who use drugs can inject in a safe location with appropriate care available. Evidence from countries where such sites are permitted show they reduce overdose deaths while providing people who use drugs an opportunity to seek treatment and other counseling in an accessible, nonjudgmental environment. The first opioid consumption sites in the United States opened in New York late last year, and have boasted remarkable success in preventing overdose deaths. Now, the Joe Biden administration is purportedly in talks to lift the federal ban on these centers, potentially reorienting U.S. drug policy away from incarceration and toward evidence-based harm reduction.

Embracing forward-thinking harm reduction through supervised injection sites and similar initiatives could be the answer to stemming the opioid crisis in the U.S. capital. Community education and naloxone distribution remain important, but these measures alone will not suffice. Turning the tide of the epidemic demands connecting with people who use opioids where they are, not just identifying them post overdose.