Go to homepage
Omicron and the Scramble from Africa
Governance

Omicron and the Scramble from Africa

"Travel bans are based on political agendas, not science, and certainly not on respect," says a physician from Namibia 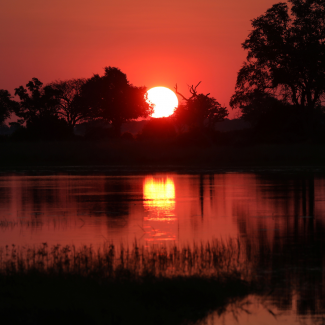 Sunset over the Okavango Delta, in Botswana, a southern African nation that has been affected by recent travel bans. REUTERS/Mike Hutchings
by Mareli Claassens December 6, 2021

"We will either beat COVID-19 worldwide or not at all."

This statement from Germany's Implementing the Emergency COVID-19 Support Programme was published this past June. Unfortunately, this inclusive worldview has not been the experience since the South African Department of Health released information on November 25 about Omicron—a new SARS-CoV-2 variant. Omicron has subsequently been dubbed a variant of concern by the World Health Organization, and travel bans were instated immediately for many southern African countries by the UK, United States, Canada, Sri Lanka, Australia, Russia, the Philippines, Austria, Germany, Switzerland, Belgium, and the Netherlands, amongst others. The African countries are outraged, and rightly so. A few basic analyses will help to explain why.

According to Our World in Data, the number of daily, new confirmed COVID-19 cases per million people, as of November 26 show notable discrepancies between the African countries, the European countries, and the UK. In Table 1 (below), this discrepancy is analyzed as a rate ratio—a relative difference measure that epidemiologists use to compare incidence rates of events (in this instance, new COVID cases) happening at any given point in time. When interpreting the rate ratio, the African countries have rate ratios ranging from 0.01 to 0.001 in comparison to the reference country, Belgium. In simple language, this can be explained as a rate ranging from 1/100 to 1/1000 in comparison to Belgium which means the chances of getting infected with COVID-19 are much smaller in the African countries.

In Namibia for instance, the University of Namibia's COVID-19 diagnostic laboratory has had only one positive sample out of 300 evaluated in the past seven days (as of Nov 26). In addition, the omicron variant has not yet been sequenced from any Namibian samples, although we have a validated sequencing facility and have previously uploaded our country's SARS-CoV-2 sequences to GISAID. Coinciding with the travel bans, Lufthansa now suddenly can not ship our sequencing consumables from Germany to Namibia. It is a Catch-22 situation; without consumables, how can we confirm that we have omicron? On the other hand, do we really want to confirm omicron in the current scenario?

Some might argue that too few tests are being conducted in the African countries and one could therefore not be certain about the number of new cases. However, the share of daily positive COVID-19 tests has dramatically dropped in the African countries since July. This is an indication that if and when there are many cases, the cases will indeed be identified. Currently the Namibian positivity rate is at 1.5 percent.

Death rates are also compared in Table 1. Currently, the African countries' death rates are much lower, ranging from 0-3.48/100,000 to the 23.38/100,000 in Belgium. However, in a previous wave around July 14, Namibia had the highest death rate in the world and was desperate for vaccines, oxygen, and other crucial resources to contain the wave. Support was forthcoming from Germany and the Netherlands among other countries, but even with the support, we have lost 3,573 individuals out of 129,180 confirmed cases (approximately 3 percent) to COVID-19 up to now.

In addition to COVID-19 cases, African countries have high estimated incidences of tuberculosis (TB) and HIV, according to the StopTB partnership which compiles estimated global rates of TB and TB-HIV co-infection. When looking at the rate ratios (in Table 2 below), the range in comparison to the reference country Belgium is 18 to 81, with Namibia at 58. The European countries and the United Kingdom have very low incidences. In the African countries, HIV prevalence in the general adult population ranges from 8 to 27 percent. In absolute numbers, this translates to a range of 4,500 - 220,000 new HIV cases diagnosed annually in the African countries. In comparison, in 2018, a total of 882 new HIV cases were diagnosed in Belgium. Of the people living with HIV, most of the African countries have more than 80 percent on antiretroviral treatment and greater than 80 percent virally suppressed.

The bottom line is that in southern Africa, we are fighting on all fronts to curb not one, but three infectious disease pandemics. Before the arrival of COVID-19, most of the southern African countries were managing their TB and HIV outbreaks. Now however, management in those areas is slipping. Identifying new cases of TB is dropping drastically because of the impact of the COVID-19 pandemic. Resources for TB are now being earmarked for COVID-19. In a report by UNAIDS for World AIDS Day entitled Unequal, unprepared, under threat: why bold action against inequalities is needed to end AIDS, stop COVID-19 and prepare for future pandemics, there is a clear warning of millions of AIDS-related deaths and devastation from pandemics if leaders do not address inequalities. The pace of HIV testing declined almost uniformly and fewer people with HIV initiated treatment in 40/50 countries reporting to UNAIDS in 2020. For the first time in more than ten years, there was an increase in the number of TB deaths among people living with HIV.

At least tonight we, as Africans, will sit outside to watch our incomparable sunset

In an interview with the BBC on November 29, African Vaccine Delivery Alliance (AVDA) co-chair Ayoade Olatunbosun Alakija said she is angry at the lack of support for African countries, specifically with the COVID-19 vaccine response. And she is angry with the immediate reaction to the sequencing of omicron in South Africa—the travel bans.

"It is simply wrong," said Olatunbosun Alakija, a physician.

I cannot agree more. When taking the above analyses into account, and adding the fact that the stringency index—a measure used by Johns Hopkins University based on nine response indicators including school closures, workplace closures, and travel bans—shows very little difference in the stringency measures between the United Kingdom, for example, and the African countries (Table 1). It is impossible to compose a rational argument based on sound scientific principles for the immediate travel bans. Our case and death rates are much lower, and our stringency measures are similar.

On top of that, omicron has already been found in Belgium, Israel, the United Kingdom, Hong Kong, Germany, the Czech Republic, and Italy, yet—apart from Israel and Japan who have suspended all travel for foreigners—there have been no travel restrictions for those countries.

To crown everything else, Moderna has stated that it is immediately going to develop a vaccine against omicron. For whom, I ask. Because in the African countries which have been banned, only Botswana has had access to Moderna according to UNICEF's COVID-19 vaccine market dashboard and the African CDC, and only about 10 percent of procured doses have been delivered—and they've arrived late. Scientists in South Africa have been trying to duplicate the Moderna mRNA vaccine to no avail since Moderna refuses to share its recipe.

A few years ago, when I went for an interview at the British Medical Research Council for a research grant, I was asked about the leadership qualities I value most. I said kindness, respect and integrity, and the panel agreed that these are indeed crucial. I am amazed about the way in which we have now been shunned and how it, in no sense whatsoever, corresponds to these qualities. We have not been treated with kindness, instead we have been pushed away, made pariahs. We have not been treated with respect, although what we have managed to achieve in the last two years has been extraordinary—fighting three pandemics at once. And we certainly have not been treated with integrity. There are so many broken promises regarding COVID-19 vaccine support, it seems impossible to count. We are not perfect, not by a long shot, but when we are honest about new findings and share these with our sisters and brothers in high-income countries, so that we can work together to find new solutions, doors are slammed in our faces.

Yes, I am angry, furious. The travel bans are based on political agendas, not on science, and certainly not on respect. At least tonight we, as Africans, will sit outside to watch our incomparable sunset, eat shisa nyama around our fires, see the shooting stars from our backyards, and maybe, if we are lucky, hear the thunder of a rainstorm somewhere close by. And tomorrow we will stand up, we will stand together, and we will continue our fight like we have always done.

Mareli Claassens is an associate research professor at the University of Namibia and a trained physician and epidemiologist.