Here's what needs to happen next 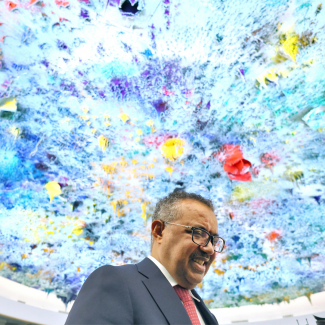 Tedros Adhanom Ghebreyesus, director-general of the WHO, celebrates his re-election during the 75th World Health Assembly at the United Nations in Geneva, Switzerland, May 24, 2022. REUTERS/Denis Balibouse
by Alexandra Finch, Kevin A. Klock, Eric A. Friedman, Lawrence O. Gostin June 1, 2022

This was a historic week for improving health outcomes for everyone. After decades of inaction, and thanks to the leadership of the World Health Organization (WHO) Director-General Tedros Adhanom Ghebreyesus and former Vice Chair of the Executive Board Björn Kümmel, the member states of WHO agreed to substantially improve the agency’s financing model, giving it greater flexibility and enhanced capacity to fulfill its mandate as the world’s health champion.

WHO’s financial resources have lagged its constitutional mandate “to act as the directing and co-ordinating authority on international health work.” Forty years ago, assessed contributions—the amounts member states are obligated to contribute—comprised 80 percent of the agency’s revenue. By 2022, that portion had shrunk to approximately 16 percent, meaning that WHO has been forced to rely disproportionately on voluntary contributions from a small set of government and private donors, such as the Bill and Melinda Gates Foundation and Rotary International, that are often earmarked to particular priorities.

In early 2021, WHO’s Executive Board chartered a Working Group on Sustainable Financing to propose a modern funding model. On May 24, 2022, member states adopted its recommendations, chief among them a phased increase to assessed contributions. In addition, donors would be encouraged to provide unearmarked voluntary contributions for WHO’s base program, continue efforts to secure flexible funding from new revenue streams, and explore holding replenishment meetings to broaden the financing base.

Those who deeply care about improving the health and well-being of all people no matter their personal circumstances have long argued that sustainably financing WHO is a cornerstone imperative—and for good reason. WHO is the only institution with the mandate and legitimacy to sit at the center of the global health architecture and bring together all stakeholders to coordinate and execute all-of-humanity approaches.

Its undercapitalization partially undermined its ability to optimally respond to COVID-19, which has contributed to widened inequalities among and within countries and it has slowed progress toward achieving universal health coverage and the health-related UN Sustainable Development Goals. With stronger financing, WHO is now better positioned to support countries to build resilient national health systems, close gaps in disease surveillance, and organize a prompt epidemic response through the delivery of stockpiled and rapidly developed medical countermeasures. With a growing list of health threats like emerging zoonotic diseases, antimicrobial resistance, the rising burden of noncommunicable diseases, and health challenges wrought by climate change and conflict, the world needs a fortified WHO to lead.

In addition to improved health outcomes, the public should expect its investment to lead to enhanced economic results. The cost of investing in institutions with effective emergency preparedness and response capabilities pales in comparison to the price of cleaning up after an ineffective response, which for COVID-19 is currently estimated to reach almost $14 trillion by the end of 2024. However, WHO’s investment case estimates that for every $1 invested in the institution, WHO provides a return of $35 in societal value; a great deal for taxpayers.

Tied to these funding increases were WHO’s own commitments to governance reforms to enhance transparency, accountability, efficiency, and compliance. These include more visible budget priority setting and improved oversight of WHO initiatives. If the agency delivers on these reforms—which it must—it will no doubt enhance members’ and donors’ confidence in it, creating a virtuous cycle of political support and funding.

And while the World Health Assembly’s sustainable financing decision should be celebrated as a historic achievement, it is only the first step toward reform and investment. As WHO delivers on the promises that underpinned the case for increased assessed contributions, the world must be ready to sustain the momentum.

So what needs to happen now and what should we expect from new commitments of capital?

Of course, this starts with countries following through on their new financial commitments. Though the compliance mechanisms available to compel payment are few, ultimately, we will only get the health agency we are willing to support.

WHO must also engage its member state finance ministers—powerful actors in their domestic settings—to participate in its activities and financial planning. They understand intuitively the economic consequences of a failure to plan and conversely, the potential return on investment that comes from effective preparedness. Finance ministers should be invited as fully engaged participants, for instance, by serving on the Executive Board’s Programme, Budget, and Administration Committee. Engaging them only after crisis has struck would be equal to malpractice given the lessons of the pandemic.

For every $1 invested in it, the WHO provides a return of $35 in societal value

Now that the world’s governments have decided to invest in WHO, other sources of capital should be pursued under the banner of additive financing. In line with the Working Group’s recommendation on establishing a new replenishment mechanism, member states could hold periodic replenishment conferences geared toward seeking investment from a broad range of stakeholders, including civil society, for either targeted WHO programs and themes or the agency’s overall mission. Also, other global health actors have made effective use of tapping the capital markets, leveraging assured government financing to pull in investor money.

As a final step, WHO must deliver on the initiatives it promised with the new assessed contributions and promote that it has done so. Even though the new financing will not allow WHO to do everything under the sun, it is incumbent on the institution to demonstrate that with new funding comes improved results.

Should that occur, member states should be incentivized to further strengthen their commitment to assessed contributions. Notably, their recent decision contemplates scaling up compulsory dues to an amount equal to 50 percent of the approved 2022 base budget by 2030. A more sustainable path would be for contributions to consistently equal 50 percent of the current period’s base budget, or even WHO’s entire budget. If the agency does deliver, member states will need to sustain their support if they want results to be likewise maintained.

The human and socioeconomic toll of COVID-19 demonstrates the dangers of underinvesting in health emergency preparedness and response, particularly the health of our vulnerable communities. But investing in health—investing in WHO—can pay remarkable dividends. Now, on the path toward greater sustainable funding, WHO is better positioned to deliver on its mandate to promote health for all populations.

AUTHOR'S NOTE: Professor Gostin and Professor Klock lead the O'Neill Institute and Foundation for the National Institutes of Health (FNIH) project on an international instrument for pandemic prevention and preparedness. The FNIH provided funding to the O'Neill Institute for the project. Professor Gostin is the director of the WHO Collaborating Center on National and Global Health Law. WHO is an intellectual non-financial partner to the FNIH-managed GeneConvene Global Collaborative. The views in this piece are those of the authors and do not necessarily reflect the views of the FNIH.

Alexandra Finch is a fellow at the O’Neill Institute for National and Global Health Law at Georgetown University Law Center.


Kevin A. Klock is senior vice president of operations and legal affairs (general counsel) at the Foundation for the National Institutes of Health (FNIH) and adjunct professor and scholar at the O’Neill Institute for National and Global Health Law at Georgetown University Law Center.