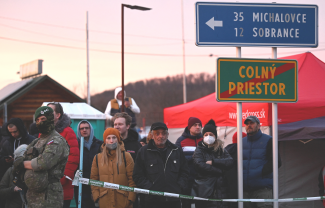 As long as there has been COVID-19, there have been pandemic border restrictions. Since January 2020, when countries first began limiting travel from China, nearly every nation has imposed travel restrictions, with some closing their borders entirely. As vaccination has become more widespread, most—but not all—countries have abandoned strict border closures and lengthy quarantines in favor of other health measures, such as requiring proof of vaccination, a negative test, or recovery from infection.

In recent months, however, concerns have mounted that these health protocols will unintentionally serve to further divide the world's haves and haves not, isolating lower-income and vulnerable populations. At the United Nations General Assembly in September 2021, for example, Ghanaian President Nana Addo Dankwa Akufo-Addo sharply criticized European nations for "retrogressive" efforts to use vaccines as a tool for immigration control against Africans. At the time, Europe was not recognizing for entry the majority of vaccines used in Africa: the Serum Institute of India's Covishield, Russia's Sputnik V, and China’s Sinopharm or Sinovac. The World Health Organization similarly warned that, unless exceptions were granted, mandatory vaccine and testing requirements may limit the mobility of refugee and migrant populations.

So, as fears of an international refugee crisis mounted with Russia's buildup of forces on Ukraine's border earlier this year, some worried that European COVID-19 control measures might hinder the safe passage of refugees if war broke out and in turn, would slow a cohesive European response. Instead, the opposite has come to pass. For many countries, the Russian invasion of Ukraine has lifted, rather than tightened, the iron curtain of COVID-19 border controls.

Based on government websites, official statements, and media reports, Think Global Health has identified 51 countries that are either accepting or considering accepting refugees from Ukraine. Of these nations, the majority are lifting entirely or modifying COVID-19 entry restrictions for those fleeing the war in Ukraine. The first half of this tracker will explore how countries have embraced Ukrainian refugees, while the second half will outline continued challenges and the limitations of these open borders.

A full database with sources is included below.

The last time Europe faced such a mass influx of refugees was after the 2011 onset of the Syrian Civil War, during which time millions of Syrians were forced to flee their homes. Rather than embrace Syrian refugees, most EU countries at best failed to address the crisis, and at worst refused to. Along with religion, race, and ethnicity, some anti-migrant leaders and populations cited public health as a major reason for their hesitancy to accept refugees. Poland's current deputy prime minister, for instance, justified his opposition to accepting Syrian refugees by falsely claiming that they carry "very dangerous diseases long absent from Europe."

In January and February of 2022, as fears of a Russian invasion of Ukraine grew, so too did concerns that the public health response to COVID-19 would act as a barrier to entry for potentially millions of Ukrainian refugees. The day before the Russian invasion, Ukraine was recording extremely high levels of COVID-19 transmission and only a third of its population was fully vaccinated. At that time, neighboring countries—Hungary, Moldova, Poland, Romania, and Slovenia—required proof of vaccination or a negative test (or both) to guarantee entry and/or avoid quarantine. Whether these restrictions would be waived in the event of a crisis was unknown. Similarly uncertain was how the broader European Union, where COVID-19 certificates proving vaccination, a test result, or recovery status were required for movement between countries, would respond.

Fears that war refugees from Ukraine would face closed borders proved to be unfounded within the first days of the war. Confronted with their fastest growing refugee crisis since World War II, European nations have cast open their doors. In a reversal of previous stances, Poland has promised to accept "all refugees who come to the Polish-Ukrainian border," while Hungary's hardline Prime Minister Viktor Orban promised Ukrainian "refugees can get all the help" they need. As a bloc, the European Union triggered—for the first time since the directive was created to respond to the refugee crisis prompted by the breakup of Yugoslavia in the early 1990s—temporary protection status for refugees from Ukraine. Accordingly, in less than two weeks, more than two million people have fled Ukraine for neighboring countries in Europe, with EU officials preparing to accept three million additional refugees in the coming days and weeks.

Commitments to take in refugees from Ukraine have extended beyond EU borders. Despite limited capacity to absorb refugees, growing anti-migrant attitudes, and lasting effects of internal conflict, Balkan and several former Soviet states have promised to take in Ukrainian refugees. Moldova has already accepted one Ukrainian refugee for every 100 Moldovan residents. Japan, notorious for its exceptionally stringent immigration and asylum policies even before COVID-19—accepting just 20 refugees out of nearly 20,000 applicants in 2017, for instance—has pledged to accept refugees. Several countries throughout the Americas have promised to welcome refugees willing and able to cross the Atlantic, while those who flee to the Pacific might find refuge in Australia and the Philippines. In total, 51 nations have promised to accept or to consider accepting refugees from Ukraine.

Among these 51 nations, more than half have entirely or partially lifted COVID-19 entry restrictions for refugees fleeing the war in Ukraine to ensure their safe entry. Most commonly, countries are simply waiving entry requirements, such as providing proof of vaccination, a negative test, or proof of recent recovery. Some countries, including Israel and Italy, are waiving some pre-arrival requirements, such as a negative test, but requiring testing and quarantine after arrival. For both countries, refugees may leave quarantine after receiving a negative test. Only a few countries, including Armenia and Japan, have indicated they will require all refugees to meet normal COVID-19 health protocol for entry. The remaining countries, including the United States and Australia, currently require negative tests and proof of vaccination for general entry, but have not yet defined the COVID-19 restrictions Ukrainian refugees will face.

This rapid mobilization and policy adaption by higher-income nations to ensure the immediate and safe entry of Ukrainian refugees is righteous and welcome. However, these pledges to accept refugees do not guarantee entry to all those who seek it, nor do they ensure that refugees will escape challenges and restrictions around COVID-19 once they arrive.

Despite promises to take in refugees, many countries have not clarified what their promises mean, or how refugees will be supported. The Japanese government, for example, has not put an exact number on refugees to be accepted. The Biden administration has simply stated that it "would accept refugees," but has provided no timelines or quotes for acceptance. Meanwhile, refugee flows have already overwhelmed the limited capacity of Ukraine's neighbors.

Some countries have limited refugee flows on grounds other than COVID-19. The United Kingdom, for example, is refusing to drop visa requirements for Ukrainians. As of Monday, the United Kingdom's lead department for immigration reported that the country had issued just 300 visas to Ukrainians, out of 17,700 applications. Similarly, though Israel is accepting Ukrainian refugees, it is reportedly capping the number of non-Jewish refugees it will accept. As such, Israel's interior minister estimated that even though roughly 90 percent of Ukrainian refugees arriving at Israel's borders are not Jewish, over 90 percent of those who have actually entered the country are Jewish.

In other nations, COVID-19 may create a barrier for refugees after they arrive. In much of Europe, proof of vaccination through the EU Digital COVID Certificate is required to access indoor locations and events. Though some nations, including France, are moving to lift these requirements in the future, in the interim, refugees may struggle to access facilities. To address this, a few countries—such as Ireland, Moldova, and Portugal—have already committed to expanding their vaccination programs to include refugees from Ukraine. But even for refugees willing to get vaccinated immediately, they may still have to face weeks of internal restrictions and limitations before they complete the full course of vaccination.

Unfortunately, there are no one-size-fits-all solutions for countries balancing how to maintain COVID-19 health measures with their Ukraine refugee-related humanitarian efforts. However, to ease decision-making for those seeking safety, governments willing and able to accept Ukrainian refugees should modify and clearly publish entry protocols to allow for the safe passage of refugees. Once in country, governments should ensure that refugees' access to housing, medical care, and other necessities are not limited by COVID-19 vaccination status—and in turn, that refugees are able to access vaccines. Above all, both in the current and inevitable future migration crises, governments must treat refugees with the utmost dignity and respect.

EDITOR'S NOTE: The authors of this piece note that according to United Nations High Commissioner for Refugees, Belarus and Russia have also accepted Ukrainian refugees and that Russian officials have promised to accept refugees from Ukraine. Because of their role in instigating the conflict and therefore the Ukrainian refugee crisis, Belarus and Russia are not included in this tracker.


Sarah Nance is an intern for global health at the Council on Foreign Relations and an M.S. student at Carnegie Mellon University.