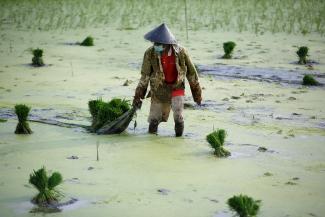 A farmer wearing a protective mask to curb the spread of coronavirus disease (COVID-19) works at a paddy field in Jakarta, Indonesia, on June 28, 2021. REUTERS/Willy Kurniawan
by Fitriani October 26, 2021

Almost two years into the COVID-19 pandemic, Indonesia continues to build new policies. President Joko Widodo has told Indonesians that COVID-19 is here to stay, making it necessary to improve public health and sustain economic recovery at home. In foreign policy, Indonesia is testing its "4+1" strategy against the challenges the pandemic has created for international cooperation. Through this strategy, Indonesia wants to avoid the blame game about COVID-19's origins and spread, and focus on accelerating its economic recovery, protecting its citizens, securing its sovereignty, and strengthening its international leadership. To achieve these objectives, Jakarta plans to rejuvenate its diplomatic capabilities. The 4+1 strategy guides Indonesia's foreign policy on issues beyond the pandemic, including climate change, where the strategy might produce friction with other countries.

The global shortages of health equipment and pharmaceutical ingredients during the pandemic shape how Indonesia's economic diplomacy aims to develop more secure access to raw materials, low- to medium-tech manufacturing, and labor resources. The country collaborated with high-income countries, including Japan and South Korea, in joint production to increase the global supply of personal protective equipment (PPE) and other products needed for COVID-19. By the end of 2020, Indonesia supplied masks, other PPE, and rapid test kits to nine countries, ten international organizations, and eighty-two non-governmental entities.

"Indonesia wants to avoid the blame game about COVID-19's origins and spread, and focus on accelerating its economic recovery"

These collaborations inform how Indonesia plans to boost economic growth by 4.5 percent in 2021, by securing foreign investment and completing trade agreements. Border closures by many countries pushed Indonesia to transform its economic diplomacy using digital efforts and conducting virtual exhibitions to promote the country's economic prospects and market of 250 million people as an attractive destination for foreign investment.

Indonesia also restarted cross-border economic activities through Travel Corridor Arrangements (TCAs) that coordinate bilateral travel between select countries, including China, Singapore, and South Korea. The TCAs allow essential foreign workers, businesspersons, and diplomats to travel between participating countries that have strict health protocols in place. Indonesia has also worked to reopen for tourists by cooperating with the UN World Tourism Organization, but the Delta strain of the virus has delayed kickstarting the tourist industry until the end of 2021.

Indonesia's second foreign policy priority, protecting its citizens, was implemented through the repatriation and vaccination of Indonesians. The Ministry of Foreign Affairs engaged in enhanced coordination to expedite repatriation of more than 120,000 Indonesians from fifty-three countries from late January through July 2020. In addition, Indonesia worked hard to obtain vaccines for its people by striking deals with vaccine producers. By August 2020, the country's diplomats had secured vaccines from China, the United Arab Emirates, and the United Kingdom. Indonesia was also the first Southeast Asian country to join the World Health Organization's Solidarity Trial for developing COVID-19 vaccines, with twenty-two hospitals participating.

Indonesia's third 4+1 objective is to secure its sovereignty. To facilitate its economic recovery and to protect its citizens, Indonesia has taken a pragmatic approach to securing its interests by accessing the health technologies and economies of the major powers, including China. Some claimed that the country leaned too much on China in getting access to vaccines. However, with the COVID-19 origins probe and China seen as a problematic rising global power, Jakarta has been careful not to be dependent on Beijing during the pandemic.

In the rivalry between China and the United States, Indonesia maintains an "equidistant" approach to ensure its sovereignty. This approach reflects its citizens' preference for an independent foreign policy and supports Indonesia's leadership within the Association of Southeast Asian Nations (ASEAN), a regional organization that emphasizes autonomy. Indonesia believes that national resilience enhances regional resilience, and vice versa. The country has worked to ensure ASEAN remains a major player despite attempts by the great powers to expand their influence in Southeast Asia.

Leadership as a Middle Power

Under the 4+1 strategy, Indonesia seeks to extend the diplomatic activism it has exhibited into the post-pandemic world. The country pushed ASEAN to lead the regional fight against the pandemic. Indonesia hustled for cooperation among ASEAN health ministers, and between ASEAN and China, Japan, and South Korea in the ASEAN+3 process. At the ASEAN+3 special summit on COVID-19, Indonesia championed an agreement on sustaining supply chains and the flow of goods, the protection of ASEAN citizens—especially vulnerable groups, such as migrant workers—and the establishment of the ASEAN COVID-19 response fund.

Beyond Southeast Asia, Indonesia maximized multilateral engagements to promote COVID-19 responses, such as the G20 leaders' commitment in 2020 to inject $5 trillion into the global economy. At the G20 Global Health Summit in 2021, Indonesia offered to become Southeast Asia’s vaccine manufacturing hub to support increased production and global equitable access.

The economic damage from the pandemic caused Indonesia to lose its status as an upper-middle income country. Even so, Indonesia's active regional and multilateral diplomacy demonstrates its determination to lead as a middle power in a strategically important region, in responding to COVID-19 and preparing the world for the post-pandemic era.

The "+1" in Indonesia's strategy involves strengthening its diplomatic capabilities. Jakarta is reviewing the capabilities of the Ministry of Foreign Affairs and its missions abroad. This scrutiny seeks to improve the Ministry's information and communication technology systems to facilitate better digital diplomacy with, for example, the border negotiations Indonesia conducted virtually with Malaysia, Palau, and Vietnam. The Ministry also wants to communicate more effectively with citizens through social media, including Instagram and YouTube. Such outreach creates domestic support for diplomatic funding even when national economic and health needs remain pressing.

Indonesia's 4+1 strategy confronts issues beyond COVID-19. As attention focuses on the climate change summit in Glasgow at the end of this month, Indonesia highlights how it reduced deforestation by 90 percent, from 1 million to 115,000 hectares (from 3861 to 444 square miles) per year, between 2016-2020. The country also halted conversion of 66 million hectares (254,827 square miles) of natural forests and peatlands to farmland and reduced forest fires by 82 percent. Indonesia achieved these results while participating in the UN Framework Convention on Climate Change's program on Reducing Emissions from Deforestation and Forest Degradation in Developing Countries (REDD+).

Under REDD+, Indonesia was to receive $1 billion from Norway for its deforestation achievements. But Indonesia has not received what it considered due for the progress on deforestation, and, in September, Jakarta terminated the agreement with Norway citing the lack of payment as one reason. This decision signals the frustration of Indonesia and other low-income countries over unfulfilled climate change promises from high-income countries. It also raises concerns about whether Indonesia will maintain its efforts to prevent communities from turning peatlands and forests into for-profit, environmentally disruptive palm oil plantations given the severe national economic damage inflicted by COVID-19.

Under the 4+1 strategy, Indonesia has engaged in bilateral, regional, and global action in responding to the COVID-19 pandemic. Indonesia prioritized the health and economic well-being of its people while protecting its sovereignty, projecting regional leadership, and promoting multilateral cooperation. However, as the REDD+ incident shows, the same alignment of domestic politics and international cooperation might not characterize Indonesian foreign policy going forward, particularly when the government faces serious domestic problems and if promises from high-income nations on vaccine equity and climate change are not kept.

Fitriani is a researcher in the department of international relations at the Centre for Strategic and International Studies, Indonesia.