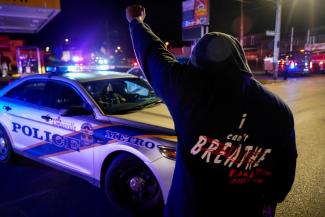 A man stands in front of a police car during the protest against the deaths of Breonna Taylor by Louisville police and George Floyd by Minneapolis police, in Louisville, Kentucky, on June 1, 2020. REUTERS/Bryan Woolston
by Mohsen Naghavi, Fablina Sharara, Eve Wool, Greg Bertolacci, Katherine Leach-Kemon, Laurent Grosvenor September 30, 2021

In April 2021, a jury declared former police officer Derek Chauvin guilty of murdering George Floyd, an unarmed Black man. For many people, it felt like a long overdue step toward accountability. In the United States, police are rarely considered culpable for killing people—they are charged with a crime less than 1 percent of the time.

But during the trial, just north of the site of George Floyd's murder, police killed yet another unarmed Black American: 20-year-old Daunte Wright. After police pulled Wright over for expired registration tags, they realized that there was an outstanding warrant for his arrest. As officers were attempting to arrest Wright, he tried to get back into his car. An officer shot him, killing him with a single bullet. Wright's killing reinforced just how little progress the United States has made in protecting Black lives since George Floyd's death.

Black Americans are the racial group most likely to die at the hands of police, due to systemic racism.

A new study—a scientific collaboration led by the Institute for Health Metrics and Evaluation (IHME) and part of the Global Burden of Disease study—indicates that police were, on average, 3.5 times more likely to kill Black non-Hispanic people than white non-Hispanic people from 1980 to 2019.

These trends follow a violent historical precedent. Policing in the United States traces its origins to slave patrols in the South, when authorities tasked young white men with controlling the movements of enslaved people, brutally beating people for breaking slave codes, or for simply doing something that the patrols disliked.  At the turn of the twentieth century, modern police forces across the country adopted tactics that U.S. troops honed in the Philippine-American war to battle insurgents who were fighting for independence. Some veterans who became police officers brought back techniques that they learned overseas and used them to target racial and ethnic minority groups at home.

"U.S. police are more likely to shoot Black Americans than white Americans, even when unarmed"

For Indigenous people, these killings follow centuries of state-sanctioned violence, including the Indian Removal Act, which allowed the U.S. government to forcibly remove 100,000 American Indians from their homelands between 1830 and 1850. Other examples include the U.S. Army's massacre of hundreds of Lakota adults and children at Wounded Knee in 1890, as well as the U.S. government's policy of separating children from families and placing them in boarding schools that aimed to erase their identity—a practice that lasted from 1860 to 1978.

Police killings are a public health epidemic in the United States, and have increased by more than a third since 2010. Indigenous non-Hispanic Americans and non-Hispanic whites have experienced the largest increases in police violence during the past decade. Violence against Indigenous Americans nearly doubled between 2015 and 2019, and the opioid epidemic has been a major factor in police killings of white Americans. Despite these increases, Black Americans remain at highest risk for police violence compared to other racial and ethnic groups.

Dying at the hands of police is much more common in the United States than it is in many other countries. Among the G20, the United States stands out, ranking second only to Brazil when it comes to police violence. Similar to Brazil, police in the United States are highly militarized, meaning they use the "exercise of military power, hardware, organization, operations, and technology as [their] primary problem-solving tools," according to Professor Peter Kraska, an anthropologist at Eastern Kentucky University. The U.S. Department of Defense allows police units to purchase military equipment. Researchers have found that police violence increases as law enforcement agencies purchase military equipment. Also, U.S. police departments have greatly increased their use of SWAT teams since the War on Drugs began in the 1980s—these teams use techniques, equipment, and weaponry that is modeled off elite military units.

Many violent deaths could be prevented by demilitarizing police and regulating civilian firearm use more strictly as other countries have done. In Italy and France, police killings are roughly 31 times lower than the United States. Italian police rarely use guns, and similarly, in France, police refrain from using guns as much as possible to prevent casualties. Canada, where police violence is 6 times lower than it is in the United States, holds other lessons: police units there receive standardized training and follow standardized practices and protocols thanks to a national criminal code; in the United States, the criminal code can vary by state.

Reducing police violence in the United States should be an urgent priority. Across the U.S. States, Oklahoma, Alaska, and New Mexico had the highest levels of police violence between 2015 and 2019 after adjusting for population size and age, while Hawaii, North Dakota, and Vermont have seen the biggest increases. Oklahoma, with the highest rate of police violence from 2015-2019, has an especially brutal history of violence against Black Americans; in May 2021, Tulsa, Oklahoma commemorated the one hundredth anniversary of the Tulsa massacre, when a mob of white people looted and destroyed one of the most prosperous Black neighborhoods in the country, killing as many as 300 people. Public officials and schools omitted mentioning the massacre when discussing local history, and only in 2020 did city officials launch a search for mass graves. No one was ever charged criminally for the death and destruction, nor has the city paid reparations to the victims or their families—a pattern that has been repeated again and again over the course of U.S. history.

Accountability is necessary to address police violence in the United States, to deter officers from using excessive force. Beyond the legal system, police union reforms are needed to save lives. For example, in a preliminary study, researchers at the University of Victoria and Cornell found a link between collective bargaining of police and rising numbers of killings of racial and ethnic minority groups.

Yet another dimension of accountability is the U.S. government's responsibility for accurately capturing police violence data. Disturbingly, more than half of the people who died at the hands of police between 1980 and 2019 were missing from official statistics published by the National Vital Statistics System. As with the staggering disparities seen in police killings, deaths due to police violence of people who are Black Non-Hispanic Americans were the most likely to go unrecorded in U.S. official statistics compared to other racial and ethnic groups.

Thanks to open-source databases compiled by researchers, journalists, and activists --Mapping Police Violence, The Counted, and Fatal Encounters--IHME has been able to adjust its estimates of police violence to capture the missing deaths. The Black Lives Matter protests of 2020 prompted us to re-evaluate the accuracy of our estimates on police violence. These changes were long overdue—since first publishing our findings as part of the Global Burden of Disease Study (GBD) in 2012, we continually missed approximately half of all deaths from police violence in the U.S. by relying solely on NVSS data to inform our estimates, despite the availability of open-source data since at least 2014. For example, in our GBD Study 2017, we failed to include a total of 14,200 deaths between the years 1980 and 2017. Our underreporting of police violence in the GBD was both a cause and consequence of structural racism within our institute and the field of public health, the same structural racism that influences so many U.S. institutions, including law enforcement. The forces of structural racism influence which assumptions are questioned, and which issues are prioritized; we see an urgent need to approach all our work with an anti-racist lens going forward.

With these revisions to our research, the findings paint an even grimmer picture of the fatal burden of police violence in America compared to other countries. These staggering differences show that the United States should invest in solutions to police violence lead by Black, Hispanic, and Indigenous communities and learn from strategies that have been successful abroad, particularly gun control, to end police violence. Countries with lower levels of police violence have tighter restrictions on gun ownership, which make it possible for police to do their work unarmed.

Police violence is a mounting threat to public health in the United States, especially for Black Americans. As our nation reckons with our 400-year history of Black Americans being "violently denied the freedom and justice promised to all," we must confront systemic racism in all aspects of policing, and consider the experience of other countries, which show us that the United States could prevent many of these deaths by demilitarizing police and strengthening gun control. It is time that we hold ourselves accountable for preventing police violence and invest in Black communities.

Mohsen Naghavi, MD, PhD, MPH, is a Professor of Health Metrics Sciences and Director of Subnational Burden of Disease Estimation at the Institute for Health Metrics and Evaluation (IHME) at the University of Washington.


Fablina Sharara is a researcher at the Institute for Health Metrics and Evaluation (IHME).


Eve Wool is a research manager at the Institute for Health Metrics and Evaluation (IHME).


Greg Bertolacci is a data specialist at the Institute for Health Metrics and Evaluation (IHME).