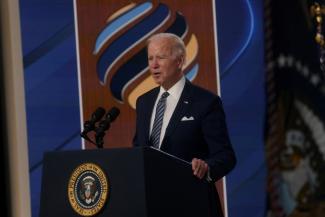 Last week, an independent task force organized by the Council on Foreign Relations released a report on U.S. foreign policy and cyberspace. The report argued that U.S. efforts to sustain a global, open internet that reflects American interests and values have failed. The task force asserted that the United States should acknowledge this reality and pursue a different strategy.

Although cyberspace and global health are different policy areas, the cyber report contains features important to rethinking U.S. global health engagement. Cyberspace and global health have long been considered transnational challenges given the border-blurring nature of internet communication and microbial transmission. The two issues gained foreign policy prominence after the Cold War and became associated with U.S. global leadership. But, in both realms, U.S. policymakers face a reckoning that demands new strategies adapted for a more divided and dangerous world.

This failure is comprehensive. It encompasses U.S. domestic and foreign policies and the inability of democracies to counter the authoritarian-led assault in cyberspace. This assessment informs the task force's argument that the United States "desperately needs a new foreign policy that confronts head on the consequences of a fragmented and dangerous internet."

COVID-19 has likewise sparked critiques of U.S. global health policies. U.S. leadership helped transform health cooperation in the post-Cold War period, especially in catalyzing engagement by democracies, international institutions, and nongovernmental organizations. However, the responses of the United States and other democratic countries to COVID-19 demonstrated that pre-pandemic leadership had not prepared them for a serious pathogenic threat. As others have argued, the COVID-19 disaster means that the United States should adopt a new foreign policy that confronts the consequences of dangerous diseases emerging in a fragmented world.

In charting a new path for cyber foreign policy, the task force acknowledged that geopolitical competition constrains the ends and means of American policies. The task force concluded that the United States cannot "stop or reverse the trend toward fragmentation."

Instead, "Washington should confront reality and consolidate a coalition of allies and friends around a vision of the internet that preserves—to the greatest degree possible—a trusted, protected international communication platform." This analysis means that U.S. power and influence have declined in cyberspace relative to its adversaries, which makes effective multilateralism nearly impossible and restricts what the United States can achieve among a more limited number of countries.

The ways in which geopolitics affected COVID-19 responses and influence thinking about the future also suggest that U.S. foreign policy faces constraints on what it can achieve, and with whom, in global health. As experts have argued, U.S. foreign policy must navigate geopolitics by building coalitions of like-minded countries rather than rely on multilateralism at the World Health Organization (WHO).

The WHO has never been the center of gravity for U.S. global health engagement, but the change in the international distribution of power and U.S. behavior during COVID-19 have weakened the American ability to win "hearts and minds" in global health. As seen at the recent BRICS summit, coalitions involving China and Russia are pledging to cooperate on health, which challenges the United States and its clubs (for example, the Group of Seven) and fuels geopolitical competition in global health.

Even though cyberspace has long been on the U.S. national security agenda, the task force argued that cyber policies failed to protect the nation's security. It argued that competing with adversaries in the digital realm should be "a pillar of the national security strategy." It stressed that the U.S. government must treat cybercrime as a national security risk and policymakers "can no longer treat cyber and information operations as two separate domains." It criticized the United States for failing "to impose sufficient costs on attackers" and recommended more pressure, sanctions, and disruptive cyber operations to deter adversaries.

The death and damage that COVID-19 has inflicted in the United States has exposed that the U.S. government failed to prepare for pandemics as a national security threat, despite decades of rhetoric to the contrary. Deepening the imprint of national security thinking would elevate pandemic preparedness and response as a vital interest and center global health endeavors around this priority. Such a shift would connect with COVID-heightened interest in holding countries accountable by, for example, imposing higher costs for failing to report outbreaks, share pathogenic samples or genetic sequence data, and provide outbreak information in a timely manner.

The task force's vision for a new cyber foreign policy includes new capabilities to achieve U.S. aims through the coalition of like-minded nations. It recommended—among other things—negotiating a digital trade agreement, creating an international cybercrime center, providing cyber aid for low- and middle-income countries, and developing cyber expertise in the diplomatic corps. The task force also pushed for the United States "to put its own proverbial house in order." For example, it should adopt better privacy policy and legislation, clean up U.S. cyberspace by reducing malicious activity, and address the domestic intelligence gap concerning malign cyber behavior.

The U.S government should put its own house in order if it wants to be credible on the global stage

Analyses of what went wrong during COVID-19 are filled with recommendations about public health capabilities that need strengthening or creating, such as better and faster surveillance, development of pharmaceutical countermeasures, infection testing, contact tracing, and outbreak communications. The pandemic exposed so many problems with the U.S. public health system that the U.S. government should put its own house in order if it wants to be credible on the global stage.

The United States grounded its vision for a global, open internet in the interests and values of democratic countries. The task force rejected this ideological approach to cyber solidarity. Instead, it recommended building solidarity through functional and procedural means, such as facilitating trusted international data flows subject to internet regulations guided by the rule of law and the principles of transparency and accountability. Based on shared responsibility rather than common ideology, this approach could accommodate non-democracies in the cyber coalition of U.S. allies and friends and make it a greater counterweight to China and Russia.

In global health, solidarity is often defined as equity concerning access to health goods and outcomes. The furor over inequities that COVID-19 exposed has heightened global health interest in equating solidarity with equity within and among nations. However, this approach could be—like the U.S. vision for the internet—a "utopian vision … unlikely ever to be realized."

In a geopolitical world, equity will not compete well in the setting of foreign policy priorities by countries focused on balance-of-power and ideological competition. Basing solidarity on democratic ideology would fail given the rise of authoritarianism and the behavior of democracies during COVID-19. U.S. foreign policy might be better served thinking about solidarity in global health as shared responsibility rather than as transnational equity.

In cyberspace and global health, foreign policy transformation has barely begun. Uncertainty looms, especially concerning whether polarization will prevent constructive changes to U.S. policies on these and other issues. For example, the continued domestic setbacks that the Joe Biden administration has suffered on climate change do not bode well for transforming foreign policy on that transnational health threat.

As between cyberspace and global health, significant foreign policy change is more likely in cyberspace. As the task force emphasized, digital competition is strategic in the dynamics of great power rivalry. For two decades, China and Russia challenged the United States in cyberspace. They did nothing similar concerning global health. Further, global health leadership contributed little, if anything, to U.S. efforts to counter the threat of Chinese and Russian power and the rise of authoritarianism in the real or the virtual worlds.