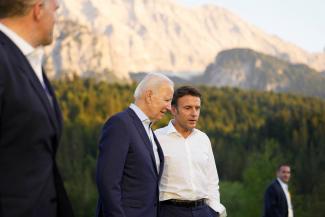 Germany hosted the annual summit of the Group of Seven (G7) from June 26-28 at Elmau in the Bavarian Alps. The need to respond to the armed conflict in Ukraine and China's continued global rise dominated the summit. The G7 leaders' communique—and pre-summit minister meetings—did not ignore global health. The communique and other G7 statements identified many global health challenges. However, the group's focus on the threats that war in Europe and shifts in the global balance of power create for its members and a liberal international order pushed global health down the G7's priority list and toward the margins of world politics.

The Times They Are A-Changin'

COVID-19 and the need to be better prepared for future pandemics were priorities at the G7 summit in 2021 at Carbis Bay in the United Kingdom. Squabbles among G7 members in 2020 prevented the group from reaching agreement on how to handle the pandemic. Given the disaster that COVID-19 had become, and with controversies raging about G7 members hoarding vaccine supplies, the G7's credibility was on the line at Carbis Bay. Although the G7's promises on vaccine sharing did not mollify its critics, the group prioritized the pandemic.

COVID-19 is no longer the searing crisis that G7 countries and the world faced in June 2021. G7 governments sustained national vaccine campaigns that helped control COVID-19. Vaccines used by G7 countries continued to work well enough against variants (for example, the delta and omicron variants) that emerged after Carbis Bay. These strains proved highly transmissible but generally caused less serious illness and fewer deaths than the original virus. As vaccine production increased, G7 countries shared more vaccines globally. By the 2022 summit, vaccine scarcity was no longer a global problem. These developments do not mean G7 members covered themselves in glory concerning the pandemic (far from it), but they highlight why COVID-19 was not one of the most pressing problems the G7 confronted at Elmau.

Instead, the G7 focused on new and metastasizing geopolitical threats to its members, the broader community of democracies, and the global balance of power. The new threat came from Russia's invasion of Ukraine, an act of authoritarian aggression that endangers security and democracy in Europe and has caused collateral economic, energy, and other damage around the world. G7 countries have been consumed with helping Ukraine fight Russia and managing the war's aftershocks. This armed conflict and its far-reaching consequences understandably commandeered the G7's attention at Elmau.

The mounting threat comes from China. This threat was prominent at the G7 summit in 2021, where G7 members launched a global infrastructure program—the Build Back Better World (B3W) Partnership—to counter China's strategy to increase its global power and influence through its Belt and Road Initiative (BRI). The B3W plan flopped, so, at Elmau, the G7 promised $600 billion for a Partnership for Global Infrastructure and Investment (PGII). Along with the G7's actions on the Ukraine war, the PGII is a signature outcome from the 2022 summit.

This Wheel's on Fire

Behind the communique's rhetoric about democratic unity, shared values, and commitment to an equitable world, the G7's responses to Russian aggression and Chinese power demonstrate that its members are on the defensive geopolitically in Europe and beyond. This context is not good for global health. The COVID-19 pandemic already saw the G7 fearful that China and Russia could gain balance-of-power and ideological advantages during this crisis, and G7 countries reacted with geopolitical intentions in sharing vaccines. The Ukraine war and the lack of a counterweight to China's BRI again finds the G7 reacting to moves by rival powers, a context that will draw global health deeper into geopolitical machinations.

For example, PGII funds will be allocated to build "vaccine and other essential medical product manufacturing" capacity in low-income countries and meet the need for more geographical distribution of such capacity highlighted during COVID-19. However, this need pre-dated the pandemic. In all the years of being engaged on global health, the G7 never addressed this need before the geopolitical threat from China’s BRI demanded a response.

Geopolitical considerations prodded the G7 to take other global health actions, such as addressing global food security problems created by Russia's invasion of Ukraine. The Elmau commitments on pandemic governance (for example, the G7 Pact for Pandemic Readiness) are also motivated by the ideological desire to demonstrate that, in the words of the communique, "when the world is threatened by division," democracies can "find solutions to pressing global challenges," such as pandemics and climate change. This motivation begs the question why, when the world was not geopolitically divided after the Cold War, G7 democracies did not find solutions to pandemics—despite being leaders in global health—or to climate change, a problem they disproportionately contributed to causing.

The communique devoted much attention to climate change and supported actions (for example, establishing a global Climate Club) on mitigation of greenhouse gas emissions and adaptation to the damage that climate change causes, especially in low-income countries. Climate change is a threat to global health, so the G7's treatment of it is important. However, geopolitical problems also plague this aspect of the G7's global health agenda.

The energy security crisis that the Ukraine war has caused puts the G7 on the defensive concerning climate change. G7 countries are compromising their mitigation ambitions in scrambling to secure fossil fuel supplies to meet their energy needs. The G7's attempts to punish Russia in the energy sector are undercut by other countries, such as China and India (a democracy invited to Elmau as a G7 partner), buying Russian oil.

G7 countries are unlikely to generate ideological benefits by providing climate adaptation assistance because they bear great responsibility for causing climate change. However, the lack of geopolitical incentives for adaptation will create problems for G7 policymakers, who are struggling with stretched resources to respond to climate adaptation problems at home and authoritarian aggression, power, and influence abroad.

Further, most global health issues identified by the G7 at Elmau—ranging from noncommunicable diseases to antimicrobial resistance—will not receive more attention because balance-of-power and ideological competition are intensifying. The lack of any connection between these problems and geopolitics means that the long-standing lack of foreign policy interest in them will continue in a world that is more dangerous for G7 countries.

At Carbis Bay and Elmau, the G7 attempted to rally its members to meet a historical moment when the power, influence, and credibility of democracies are under threat. Global health is trapped in this moment.

At the same time, global health does not escape the distorting lens of geopolitics that countries, including G7 members, now apply in foreign policy. This dynamic tempts rivals to exploit some global health issues for power and influence rather than to support a rules-based multilateral order, shared values, or an equitable world. As the Elmau summit demonstrates, democracies in geopolitical trouble can conflate this temptation with acting as defenders of the principles and values of democracy.