Go to homepage
In Brazil, a City Councilor from Belo Horizonte Has Big Plans
Governance

In Brazil, a City Councilor from Belo Horizonte Has Big Plans 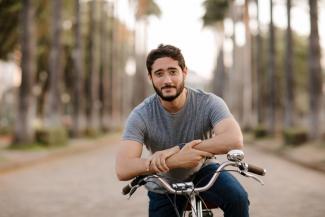 In Belo Horizonte, Brazil, Gabriel Azevedo is not a typical city councilor. An irrepressible admirer of the metropolis, Azevedo is known for favoring a bicycle over a car and for his ardent promotion of creativity and participatory democracy. First elected in 2016 at the age of 30 and reelected four years later, he is widely believed to be contemplating a 2024 run for mayor of Belo Horizonte, the capital of Brazil’s state of Minas Gerais, which boasts a population of 2.7 million.

Azevedo spoke with Think Global Health about helping govern the city through a devastating pandemic and his optimism about its future.

Think Global Health: What appealed to you about running for city council?

Gabriel Azevedo: I'm a big fan of Alexis de Tocqueville, who wrote Democracy in America, and I believe in the power of community. I think democracy is connected to cities.

People say democracy is people in power, but it's not. When democracy was invented in Athens, Greece, the idea was to establish a grid and say you represent this portion of Athens and you're going to participate in managing the city. That's democracy—the division of the city and the ability of those people to take care of themselves.

Democracy disappeared in 322 B.C. and the world had 2,000 years without democracy until the English people [reinvented] it. But when democracy appeared again, it wasn't a city plan; it was a national plan. And something about representatives in a big scale complicates things. That's why I think representative democracy is suffering a crisis all over the world nowadays. I believe that democracy is first of all, a local plan, a local invention. And I believe in the capacity of people to take care of their own places. I believe that people who love their place will take care of their neighborhoods and solve shared problems.

I am not the kind of politician who believes that you sit at a desk, set a plan, and impose it on the people. You bring them together. You call them and ask, "What do you want for your neighborhood?"

I'm going to live here forever. I travel a bunch—ninety-one countries and counting—but this is the place where I am going to live. This is my place and I want to take care of it.

Think Global Health: What is the city council like and how do you fit in?

There are forty-one city councilors. Most of my colleagues are from religious sects—priests or Evangelical preachers, or community leaders—that’s very common in Brazil. They were elected to take care of their neighborhoods. The city councilor who received the most votes is a trans woman—she got 38,000 votes—and is very connected with sustainability causes. She's running right now for Congress. The second-most popular was a young man, very connected with President Bolsonaro.

And the fourth is me. I am a professor. I live in the city. I am an openly bisexual guy who doesn't have a religion. There are just three city councilors younger than me.

In me, people see someone who loves the city and who has the education and experience to manage ideas and make it happen, and who is very connected to the causes that make a difference in people's lives. Ideologically speaking, I am a centrist social liberal. I don't fight with the left or with the right. I'm someone who brings everybody to the table to talk, and who has common sense. I think that's rare nowadays, not only in Brazil but all over. I am the leader of the biggest bloc of eleven city councilors, which is over 25 percent of the total.

Mobility is my biggest cause. I eat, sleep, and shower thinking about bus systems and mobility and integration within the metropolitan area

Gabriel Azevedo: Mobility is my biggest cause. I eat, sleep, and shower thinking about bus systems and mobility and integration within the metropolitan area. Belo Horizonte isn’t connected with the cities in the region, and we don't have a subway—it’s just one line that is very complicated. We are talking about six million people in the metropolitan area, the state capital, with the most cars per citizen.

One of my symbols is the bike. People know that I use the bike all over. I have an electric bike and I defend new types of mobility. Second are jobs: in our city, if we don't make it easier for entrepreneurs, we're going to lose business and jobs to cities around us that offer better conditions. Third is social [welfare]: we have 15,000 people living on the streets.

The big thing I'm working on for next year is a platform called Smart Belo Horizonte, to show people where the budget goes. We have an annual budget of R$15 billion ($3.1 billion). If you're going to talk about buses, how much money goes to the buses? How much benefits people?

Think Global Health: Your approach to budgeting and your thinking about transportation exemplify ideas about decentralizing decision-making. Why is that important to you?

Gabriel Azevedo: It comes from observing people. Everybody—even people on low incomes—has a smartphone in their hands. You pay your bills here. You date here. You order food here. And politics works if politics are where the people are. You need to put the government in the people's hands.

Last week, the city negotiated a deal with the bus companies. I want an app that allows people to see where the bus is in real time, how many people are on board, and it can manage the fare. If we have the tools to do it, if there are people doing it all over the world, [Belo Horizonte] should do it, too. But most of my colleagues and even the public administration in Brazil are still living on paper and in the past. They don't study other cities. And there is corruption, so you need innovation. You need to fight corruption with transparency and more liberty.

Think Global Health: During the COVID-19 pandemic, you headed the city's public health commission. What was your role, and what were some of your accomplishments and lessons learned?

Gabriel Azevedo: The first big fight was about closing or not closing. We passed a bill [that allowed the city to fine] people who don’t wear masks. We're very proud to respect science on this commission. Some city councilors connected with Bolsonaro denied the disease, denied the importance of public health. I'm very proud that we followed the science and did not appeal to populists.

The number of people who died in Belo Horizonte was low compared to other Brazilian cities. I think that was partly due to our management, and due to Mayor Alexandre Kalil. I disagree with him on some stuff, but he was a very good leader and managed to act without concern for his popularity.

Municipal elections were in November 2020, more or less between the first and the second wave. For a politician to make unpopular decisions, that comes with a cost. I know that I lost some votes being against the Bolsonaro presidency and against those people that deny COVID-19 and the importance of the actions that the city took.

During crises, it's important to have an innovative, responsible, and well-managed system, especially for health

Think Global Health: How have the last two years changed your views about the role and responsibility and limitations of government?

Gabriel Azevedo: I don't think that state or national government should be big or a totalitarian presence in peoples’ lives, but especially during crises, it is important to have an innovative, responsible, and well-managed system, especially for health. This is not going to be the last and only pandemic during our lifetimes. There is something coming, worse and bigger than this.

Think Global Health: What would people be surprised to learn about you?

Gabriel Azevedo: I own a jazz bar and work there as a waiter at least once a week. Once while I was working, a little old lady was looking at me. “You know, you are so similar to a city councilor that I always see on television.”

It's really fun and it's also a business. I don't believe that politics should be a business. I have other means to earn money: I'm part of a company for lawyers. I'm a journalist, I'm a professor of constitutional law.

Think Global Health: Do you sleep very much?

Gabriel Azevedo: I play hard and I work hard. People know they will find me at parties, events, restaurants, bars. I'm 36 years old, single, so I enjoy life!

Rising from the Ashes