To build on the country's early success against COVID-19, we should envision an overall Latin American pandemic response 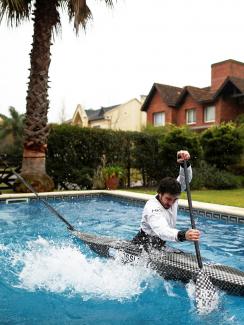 Argentine canoeist Sebastian Rossi trains in his girlfriend's pool, due to the coronavirus outbreak, as he prepares for the postponed Tokyo 2020 Olympic Games, in Buenos Aires, Argentina June 8, 2020. REUTERS/Agustin Marcarian
by Carlos Javier Regazzoni July 9, 2020

Argentina has been recently included among the countries that have done well in the first six months of the pandemic—and presumably best positioned themselves for whatever comes next. Undoubtedly, my country’s low mortality and number of cases have been remarkable. But precisely what comes next in the pandemic is unclear and potentially perilous. Will we continue to set a good example with our story—or will we become a hard, cautionary lesson for the entire region? Will Argentina's quarantine success become a lockdown trap, threatening our economy and stretching our lonely road out of pandemic, poverty, and social conflict to impossible lengths?

Stretching our lonely road out of pandemic, poverty, and social conflict to impossible lengths?

Developing countries face severe problems with mitigation and suppression of COVID-19, as was pointed out by a recent model. Limited health care system capacity, closer inter-generational contact, and a large, informal employment sector filled by people in desperate need of work, are factors that largely negate the benefits of a younger population as well as successful initial containment efforts, which is exactly the case in Argentina. A weak testing strategy allowed thousands of undetected cases to reproduce the disease in the community as evidenced by the high positivity rates of tests. As a result, Argentina slowed but never interrupted transmission, and cases have been steadily increasing. In the short term, as local health authorities are now admitting, health care system capacity could become overwhelmed in the country, and COVID-19 could soon cause substantial excess deaths. Despite the laudable success of our long-lasting quarantine, more cases and more poverty could be its inevitable consequence.

Social conflict in Argentina is beginning to scale up—similar to what other western countries are experiencing—as promoters and detractors of the lockdowns find out new arguments to support their positions. Because of this public division, a prolonged, continued quarantine threatens to undermine the political cooperation that was critical to our initial success. Without a powerful testing and poverty relief strategy, there is no way out of the vicious circle of more quarantine, more poverty, lockdown breakdowns, and a rising number of cases and deaths.

The vicious circle of more quarantine, more poverty, lockdown breakdowns, and a rising number of cases and deaths

In 2007 it was predicted that in the case of a pandemic similar to the 1918 gripe Española (Spanish flu), around 96 percent of pandemic deaths would occur in the developing world. The recent evolutions seem to fulfill this statement. Argentina was able to avert for a while the catastrophe we are seeing in other Latin American countries. But in the face of more than one hundred days of quarantine, this initial achievement would prove to be unsustainable. The mayor of Lomas de Zamora one of the largest municipalities of the country, has contracted the virus—along with the deputy secretary of security of the country and many middle ranking public officials, police officers, hundreds of health care workers, and many nursing homes residents and workers. All these cases point to a clear rise in the extent of the epidemic.

The foreseeable future entails a number of questions for Argentina as well as the entire region, and signs of alarm for the west. Our region faces the same health problems as the developed countries but our options are fewer. Coronavirus has slammed the region, and our choices are increasingly limited. Argentina has been able to apply a long-lasting quarantine, regarded by government advisers and president Fernandez himself as the only available solution, but the country couldn’t increase its testing capacity and offer relief for poor households to lift them up to the challenge. There is a possibility that the country will be unable to do it alone, as would be the case with other nations of the region as well.

Coronavirus has slammed the region, and our choices are increasingly limited

In the meantime, Latin American cooperation is silent at this critical point, and global actors like World Health Organization (WHO), among others, seem to lack enough resources and leadership. For Argentina in particular, and against the opinion of prestigious world economists and the International Monetary Fund (IMF), international debt creditors press the country, pretending to ignore the turning point situation we face. Some neighboring countries could run into the same fate in terms of foreign investment and credit retraction. At present there are no multilateral actors involved in developing a solid, long-term regional health-care strategy. The perhaps inevitable increase in poverty and disease will most probably push the entire region into despair, with severe consequences for the international community as a whole.

We need to put into action global governance organizations right now to address this peril. The international leadership of high-income countries must meet the challenge and provide a clear strategy for Latin America that allows us to overcome the pandemic and envision a realistic plan for reconstruction.

Standing out should not mean standing alone

While Argentina debates internally over the agonizing choice between, on the one hand, prolonging its quarantine to stop the virus and printing money to relieve its impoverished population—or on the other reopening the country at the risk of runaway infections—the silence of the international community is deafening. The failure of most of our neighbors to stop the pandemic would seem to make ours a lonely march. But standing out should not mean standing alone. Even though we now suffer, regrettably, with the coronavirus setting the agenda for our priorities, the country should not be an exception moving forward. Instead, let’s foster regional cooperation so that Latin American countries can lift each other up and build upon the fight against the pandemic that has been so successful in Argentina. Let's not allow what seems like the beginning of a promising path end in another frustration.

Estimating the Latin Wave of Coronavirus

State by State, Charting a Path Out of Lockdown

NC, VT, and WV could open in the first weeks of May—states such as IA and SD will likely need to wait until late June