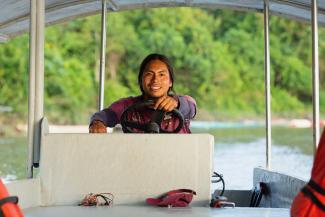 This week, the podcast Seedcast debuted its second season with an episode about the Achuar community, an Indigenous people who live in the Amazon rainforest in Ecuador.

Up until recently, gas-powered canoes had been their main mode of transportation in the remote part of the jungle where they live, but after research and deep discussion, they chose to lean more on solar-powered boats in order to help sustain connections between their communities which are stretched out along the Pastaza River. But the goal was also to reduce pollution in their territories and the wider environment.

"The Boat of Dreams" episode invites listeners to hear how Achuar community members brainstormed and problem-solved and worked with an organization called Kara Solar to create a new, sustainable solution for river commuting.

Last year, the podcast—produced by nonprofit Nia Tero—came out with 17 episodes, each an engaging and deep dive into the lives of Indigenous people around the globe, often exploring how their traditions are a key to a sustainable future. The show has explored values of families and communities from islands, how a community of Indigenous Mixteco and Triqui farmworkers displaced to the United States is standing up to exploitive practices and reclaiming their language, the experience of bringing a Native-centered menu to life in a restaurant and arts venue in the Pacific Northwest, and the story of a mother and adult daughter's parallel journeys as activists for their country, the Philippines. In a couple of cases, Seedcast runs episodes from other podcasts.

"At the heart of each episode is a conversation with an Indigenous collaborator about how they stay connected within their community but also across communities in order to care for the Earth," says Julie Keck, consulting producer at Nia Tero, adding that it's about making good stories that resonate with listeners.

Seedcast is inspired by Seattle-based Nia Tero's mission to work in solidarity with Indigenous peoples and movements worldwide. The Seedcast name came about through a collaborative team discussion.

"We wanted to acknowledge in our podcast's name the deep roots inherent in Indigenous stories but to also share that some of these ideas might be new seeds of understanding for many people. The image of amplifying Indigenous knowledge far and wide truly resonated with us," says Tracy Rector, Managing Director, Storytelling, for Nia Tero.

The team at Nia Tero has been on a steep learning curve since it first started producing Seedcast. The spark for episode ideas comes from group discussions. Seedcast host Jessica Ramirez says, "The brainstorming process for our episodes is really collaborative and dynamic. Everything we do is grounded in the idea that Indigenous peoples are experiencing the climate crisis first and most."

Our "Seedcast" stories remind us of the constant need to listen to the environment, our ancestors, to each other, to the birds, to the mountains

The podcast isn't an investigative podcast, Keck says. "We're not trying to blow the lid off of anything. We're not trying to 'discover' anything. The word 'discover' is a pretty loaded word for our primary audience. It really is not about the obvious stories, but the stories that are so unique and personal to the individuals who we are talking to," she explains.

Interviewees aren't there to represent their whole tribe, or whole nation, or whole region—it has to do with their individual humanity and their specific experience with what they've done and what they are doing, Keck adds.

While every episode is tied to Indigenous land sovereignty and guardianship, one of the themes listeners will hear emerge in this year's Seedcast episodes is that land guardianship is at its core about wanting to be involved in the decision-making processes for the land—whether that's through policy making or art or activism.

"Each episode shows another way land guardianship is happening, whether that's through water, or growing food, or learning a language," says Keck.

"In our Seedcast stories, they remind us of the constant need to listen to the environment, our ancestors, to each other, to the birds, to the mountains and waters and plains," says podcast host Ramirez.

In each episode, Ramirez says collaborators generously share tangible ways that we can all contribute to the health of the earth now and in the future, adding, "The words are theirs. Our only job is to honor and uplift their stories in a good way."

The Art of a Pandemic

COVID-19 street art from around the world