Go to homepage
What are Microbiomes and Probiotics?
Food

What are Microbiomes and Probiotics? 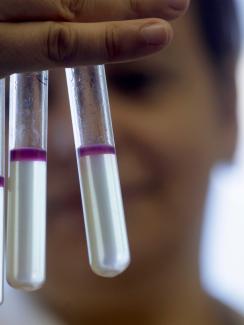 Researcher Marina Soloviecika holds tubes of a deadly strain of E.coli isolated during an outbreak in Riga, Latvia on June 9, 2011. Many other types of bacteria live safely in or on the human body. REUTERS/Ints Kalnins
by Sandra B. Munro and Andy McShea February 25, 2020

Imagine a form of life that exists almost everywhere on Earth—but is hidden in plain sight. If you had every human being on the planet stand on a massive bathroom scale, this life form would weigh in at more than 1,000 times heavier. And yet most humans live their entire lives unaware it even exists: this gargantuan protoplasma of teeming microbial life that permeates our world like an invisible biological internet—only far more complex. A subset of this population of mixed bacterial species lives within us, and are generally referred to as microbiomes.

Despite a surge in population driven in large part by industrialization, and a more recent propensity toward hygiene, humans remain inordinately outnumbered by bacteria. Humans make up around 0.0001% of Earth’s biomass, the remainder being mostly plants and many (billions to trillions) of species of microorganisms. Microbes specialize themselves to specific niches within the environment – whether it be oceans, plant life, or in the human body. In fact, approximately 2 million tons of microscopic life lives directly on or in our bodies at any one time; to put that in perspective this is equal to one third of the weight of the Great Pyramids of Giza.

Bacteria pre-date humans by billions of years, so given such a head start it is not surprising they outnumber and outweigh humankind. More remarkable is the number of bacteria that occupy our individual bodies. For the 30 trillion or so human cells that comprise a single healthy human being (our ‘selves’), it is estimated that there are 38 trillion bacteria living within that human. Even though all these cells together comprise less than 1 percent of your total body mass, they still outnumber your own cells, This might be why some days you just don’t feel like ‘yourself’!

At the genetic level, the number of genes encoded in the genomes of microbes compared to that of humans suggests that microbiomes are far more complex than we are. Complexity and sophistication can be hard to quantify objectively; however, genetic complexity does provide a yardstick. Gut and mouth microbiomes, which account for the majority of bacteria in the human body, are comprised of more than 45 million unique bacterial DNA elements. Even the most conservative estimates of the number of genes in the human microbiome suggest that their complexity is two orders of magnitude more elaborate than our own genetic blueprint. Clearly, there is much data to mine here. Furthermore, if DNA data can be equated to biological sophistication, maybe we should rethink our relationship with our microbiomes.

For most of our lifetime, humans generally coexist in peace with these impalpable co-habitants. Occasionally, a bacterial infection can threaten its host, initiating an immune response. Our impression of bacteria has been tarnished by the reputation of bad actors such as Salmonella, E. coli O157, and other dangerous and even lethal bacteria that are not a normal part of our microbiomes. While bacteria account for about half of all infectious disease outbreaks globally, most bacteria that live in the human gut under normal conditions seem to get along just fine with us. The vast majority of species that exist within humans are so often dismissed, perhaps through inattentional blindness, that even our perception of fighting a bacterial infection could be considered as flawed. What if we considered the outbreak of bacterial infections to be more like a form of insurrection, sweeping across large and complex populations of microorganisms? In this context the role of the infection becomes very different - a ‘reboot’ of the microbiome. In other words, what doesn’t kill us makes us stronger.

Curiously, throughout the ages humans have actually sought out food that contains microorganisms: food sought after and even cherished by the most refined gourmets. Culinary delights such as cheese, yogurt, miso, kimchi, tempeh, natto, sauerkraut, salami, chocolate, kombucha, and teas all contain bacteria or are products of bacterial fermentation. The latter converts inedible plant materials into edible foods, preserves unstable foodstuffs, and alters chemical components to produce (mostly) desirable flavors and odors.

If you’ve ever eaten a cocoa bean fresh from the cocoa pod, you will know that it bears no resemblance to the taste of chocolate whatsoever, but the cocoa bean that has been fermenting for a week with a mixture of yeasts and bacteria actually smells quite chocolatey. The tradition of fermented foodstuffs can be traced back thousands of years, and is consistent with a form of technological coexistence that solves issues with food stability, digestibility, and even palatability. This leads to a deeper question of whether the pleasant flavor and positive attributes of foodstuffs is something purely coincidental, or is a mutual codependency between microbiome and host driving humans to seek out, cultivate, multiply, and distribute these comestibles.

Furthermore, it’s possible that bacteria act as natural ‘adaptors’ that permit their host humans to survive on more challenging foodstuffs or function more efficiently in a hostile environment. Given that bacteria can reproduce as quickly as 20–30 minutes versus 24 hours for division of a human cell, there may be a symbiotic advantage to harboring a microbiome that can react and respond to the environment very quickly, as opposed to the slower adaptive capability of the human host. In this way, perhaps our microbiomes can protect us from extreme environments, pollutants, or even be engineered to prepare us for space travel.

Bill Gates has suggested engineering the human microbiome as an approach to address malnutrition and ultimately to develop therapies for asthma, allergies, and some autoimmune diseases. A great deal remains to be learned about our microbiomes (or should we say ourselves?), including tantalizing opportunities to improve global health as well as the possibility of buffering humans against increasingly challenging environmental conditions.

In our next post we investigate the technologies and trends toward pro-actively consuming bacteria to boost our microbiome, including probiotics, and the role of the microbiome in medicine.

EDITOR’S NOTE: Sandra B. Munro s employed by the University of Washington’s Institute for Health Metrics and Evaluation (IHME), which leads the Global Burden of Disease Study. IHME collaborates with the Council on Foreign Relations on Think Global Health. Andy McShea is the Global Vice President for Operations at Probi in Redmond, Washington, which is dedicated to probiotics. Both authors are life-long scientists who have studied microorganisms in many guises. All statements and views expressed in this article are solely those of the individual author sand are not necessarily shared by their institutions.

Sandra B. Munro, PhD, is a Publications Officer at the Institute for Health Metrics and Evaluation, University of Washington.


Andy McShea is the Global Vice President for Operations at Probi in Redmond, Washington.

Is Fast Food Eating Away at Africa's Progress?

It is often said that Africa is the future, but what kind of future will it have if its population is unhealthy?

In Somalia, Should COVID Vaccination or Food Security Come First?

Food Fight: Fighting for Healthier Food is a Life-or-Death Struggle