A Visit with the UCLA Art & Global Health Center 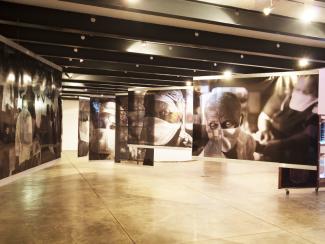 The UCLA Art & Global Health Center is special—a celebration of life even though its projects are often centered around serious health issues, including HIV/AIDS. Based in Los Angeles, it is anything but a homebody. The center's staff and exhibits have traveled to five continents and 12 countries, working with students and communities "to create arts-based public health interventions guided by principles of human rights and social justice," says David Gere, the center’s director, explaining their mission. He spoke with Think Global Health about the center's roots, unique projects, and goals for the future.

Think Global Health: When did you first launch the UCLA Art & Global Health Center and what inspired you to create it?

David Gere: We launched in 2006. The impetus for starting the center was that I had been working as a dance and music critic in San Francisco starting in 1985 and as you can imagine, entering the arts at that moment, it wasn’t just about listening to Beethoven and watching Swan Lake. It was about new art that was being made in response to the AIDS epidemic, which was unfortunately at full flower at that point and only growing in its amplitude.

Think Global Health: Why did you pursue global health versus focusing on HIV/AIDS in the United States?

David Gere: In the early 2000s, I was working at UCLA, teaching in the World Arts and Cultures Department. Having had that experience earlier on in San Francisco, I was thinking about how HIV was affecting people in other parts of the world at that point, and realizing that it was truly a pandemic. I was reading articles in newspapers and journals that were about, for example, HIV in India. And that touched my heart because I had lived in India for three years just out of college. I had a fellowship from Oberlin College to teach at a small college in South India and as a result, I had deep relationships with people who lived there and I really cared about those people and that place. I realized that what I had witnessed in San Francisco was being revisited on South India, among other places. And I wondered if there was a way artists could be involved and help.

I managed to get a Fulbright grant to travel with my family for six months to live in Bangalore, India. The aim was to ask the question, "How are artists intervening in the epidemic in India—artists of all kinds?" Really, it was curiosity. And what it led to was a series of trips I took around the country to meet artists who were very directly intervening in the AIDS epidemic from different perspectives. I met filmmakers, puppeteers, dancers, musicians, people working in all the artistic fields, and it was so amazing to meet them and to witness their strong energy and their belief that by making art, they could do some good for the world.

Think Global Health: So, the seed of the idea began in India?

David Gere: We started an initiative there called Make Art/Stop AIDS. We gathered together about 100 people from different parts of India. With some support from UNAIDS, we were able to meet and start something exciting—conversations that built into what has now become the UCLA Art and Global Health Center.

Think Global Health: Much of your work still focuses on HIV/AIDS. Can you talk about the projects currently at the center?

David Gere: We spend about a third of our time working on AMP! (which stands for Arts-based, Multiple-component, Peer-education), better known as the Sex Squad—a diverse group of UCLA undergraduates who use dance and poetry and music, among other art forms, to talk about sexual health along with humor and personal stories. They perform with and for high school students. That’s a big chunk of what we do every year and we are always continuing to create new concepts for that.  The David and Linda Shaheen Foundation is our major funder.

Another third of our time is spent on the Through Positive Eyes project, which involves people living with HIV and AIDS who take photographs of their own lives and tell their own stories. It's used as a way to get deeper inside the experience of what it is like to live with HIV and hopefully help to make stigma fall away. Launched in 2007, the project has been a platform for more than 150 HIV-positive people in 12 cities around the world to tell their stories and share their experiences. The Herb Ritts Foundation provides ongoing support.

And then the third focus is on the RAD Lab, and it is essentially the research and development wing, where we explore other projects and issues using some of the methodologies and ideas and concepts and artistic energy that we’ve developed in the other two projects.

Think Global Health: Have you worked on projects involving global health issues beyond HIV at this point, or do you plan to?

David Gere: Our center really wants to delve more deeply into mental health now that the taboos with discussing mental health are starting to break down. We could use some of the same methods that help us break down the stigma with HIV.

Think Global Health: What did you do during COVID?

David Gere: During COVID, we had a very strong UCLA squad that performed on Zoom. Students came and witnessed it online with their teachers. And we toured, virtually, our Through Positive Eyes workshop and exhibition at the Bill and Melinda Gates Discovery Center in Seattle.

Think Global Health: What have been some highlights for you and your team over the past 16 years? What are you proudest of?

David Gere: Pride isn’t a word I particularly relate to but when exciting things happen, when it comes to artistic engagement, person-to-person, I do feel a kind of pride around that because then I think it’s working. Important things can happen in that dark and transitional space—the theater—where we change, where we’re feeling and considering things we wouldn’t have reconsidered otherwise. And that’s what artists can do; put before us scenarios and ideas and images and thoughts and inspiration that we wouldn’t have encountered otherwise.

Think Global Health: How do you measure success and impact of your programs?

David Gere: In my performance world, we can tell through the applause. But we also work with UCLA and University of North Carolina - Chapel Hill public health colleagues who know how to do measurements—quantitative and qualitative measurements. But we also give surveys about knowledge and attitudes, especially about stigma toward HIV.

Think Global Health: What types of projects do you do in other cities and countries?

David Gere: For the Through Positive Eyes project, we went to three major cities in South Africa, then brought our exhibit to the Fowler Museum in LA. It had photo stories on the wall with some video elements, too. At the halfway point of the exhibit, we created a gallery where you could calm down and take in what you’ve experienced and what you feel about the people you are seeing with HIV. We asked visitors to write their feelings down on a beautiful piece of parchment paper and hang it on a wall—essentially a prayer wall that follows a model for Buddhist prayer. It was a snapshot of what was going on in that moment for that person and whether stigma was shifting or not. People wrote such deep and personal reflections, and reported change. After witnessing the Through Positive Eyes stories and the seeds of empathy were planted. We got together a student team with our experts and they took photos of every one of those 1,500 paper slips, categorized them, and submitted their findings recently to a journal.

Think Global Health: What's next for the center?

David Gere: We’re thinking hard about how to adapt our projects to other locations and circumstances. We have a new grant that’s about taking the Sex Squad idea to juvenile detention centers in California. We’re partnering with the UCLA Prison Education Program.

Another hope: Taking the Through Positive Eyes project to Eastern Europe. We’d like to take it to the Ukraine. There are certain stories that need to be told there that can't be told anywhere else. We’ve been on five continents and in twelve countries, but we’ve never been able to break through in Eastern Europe and we would like to.

The Art of a Pandemic

COVID-19 street art from around the world

Our top fifteen favorite reads of the year