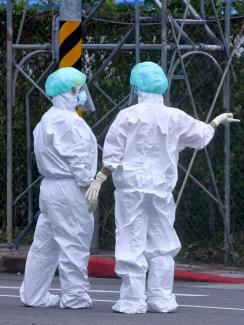 Two medical workers in full PPE talk to each other at a newly open drive-through COVID test venue in Taipei, Taiwan, on May 4, 2022. REUTERS/Ann Wang
by Tsung Ling Lee and Daniel Fu-Chang Tsai August 2, 2022

When SARS-CoV-2 erupted on the world stage in 2020, Taiwan's politically sensitive—if not elusive relationship with the World Health Organization (WHO) came into the media spotlight. COVID-19 also highlighted escalating geopolitical tensions between Taiwan and China.

Taiwan with a population of 23.8 million, shares a complex history with China vis-à-vis the Kuomintang (KMT, also known as the Chinese Nationalist party) and the Chinese Communist Party (CCP), where both parties were in a civil war that ended in 1949, with the KMT fleeiting to Taiwan. With each passing decade, as China rises and extends its global influence, Taiwan becomes visibly invisible. During the 2003 SARS outbreak, concerned over Taiwan's management of the outbreak, the WHO dispatched a two-person team to Taiwan with specific protocols on its interactions with the local to avoid objections from China. With its sensitive political status, Taiwan is seen but not heard.

Taiwan and the WHO

Throughout Taiwan's history, its governance has been deeply intertwined with public health. Located in a sub-tropical region, Taiwan—an island of 23 million people—is prone to tropical diseases. During five decades of Japanese colonial rule between 1895 and 1945), the Japanese colonial government lost more soldiers to malaria than on battlefields. The high mortality rate led the colonial government to invest heavily in Taiwan's public health infrastructure—in clean water supplies and sewer systems and in social policies such as vaccination and public health education and surveillance. For example, local police forces carried out routine sanitary inspections in their respective precincts.

During this time, public health and police made strange bedfellows, but the combination proved strikingly effective results from a public health perspective. The Japanese colonial government achieved considerable success in controlling malaria and shared their practices with their colonial counterparts in Europe. Later, Japan would advocate for a regional office that became a blueprint for the WHO's Western Pacific Region office.

Prior to fleeting to Taiwan, the KMT, then the legitimate government of mainland China, attended the International Health Conference in 1946, making the KMT's Republic of China one of the founders of the WHO. During Taiwan's authoritarian era, it enjoyed a brief, yet close, technical collaboration with the WHO (until Taiwan lost its seat to the People's Republic of China as the legitimate government of China in 1971). Not long after WHO's establishment in 1948, Taiwan worked closely with the international agency, collaborating with the United States on malaria prevention and control, which made Taiwan a poster child for malaria eradication by 1965.

The WHO worked alongside U.S. aid agencies and Taiwan's public health agency, serving as the project leader for the malaria project in Taiwan. The WHO assumed the technical and operational roles, overseeing the use of Dichlorodiphenyltrichloroethane (commonly known as DDT)—albeit controversial by today's standard—to prevent the spread of malaria. Later, to encourage local ownership of the project, local agencies assumed project responsibility, with the WHO serving in an advisory capacity. The malaria project helped embed health as a development priority, which guided Taiwan's public health policies in its authoritarian era, where investment in a healthier population later paved the way for economic prosperity.

Modern Times Call for Past Measures

In an era of economic globalization, viruses and pathogens now travel faster than ever before in history. The practice of collaboration between the government and health leadership in Taiwan resurfaced during the COVID-19 pandemic when the police force was tasked with ensuring people abided by quarantine orders—though it was not without controversy. While Taiwan's initial success over COVID-19 prevention and control won worldwide praise in 2020 (In 2020, Taiwan went eight months without a single domestic transmission of COVID), the young democracy also faced challenges in reopening its borders. Taiwan had implemented one of the strictest border control measures in the world. While international borders have reopened in neighboring countries, Taiwan has taken on a cautious wait-and-see approach, observing the respective COVID-19 trends in Japan and Korea as they welcome back foreign tourists.

For Taiwan, health continues to be political—especially as it attempts to distinguish itself from authoritarian China by departing from its earlier zero-COVID strategy. It is now focused on living with COVID as the rest of the world reopens. While Taiwan's sensitive political status has prevented its involvement at the WHO, the self-governing democracy relies on the Global Cooperation and Training Framework to boost its international presence in the evolving global health terrain underpinned by geopolitics. Despite opening borders in neighboring countries, entry controls for foreigners in Taiwan remain relatively strict. As Taiwan is not a part of the WHO, this means the government is under no obligation to explain its border control measures—whether it is based on scientific principles and WHO guidance—including entry restrictions to the world. Without a formalized structure where Taiwan is given a chance to be heard, the absence of Taiwan in global health could create a patchwork in global health security where the emergence and re-emergence of pathogens require concerted and coordinated global health efforts. Arbitrary closure of international borders can add strains to global supply chains, along with social and economic disruptions that can ripple through the world.

Taiwan and its history of infectious disease control reveal complicated social relations and power dynamics with the WHO and China, where the management and prevention of emerging—and the reemergence of—pathogens go beyond merely preventing vector transmission. More generally, the global political economy shapes how infectious diseases are managed and controlled. Strikingly, Taiwan's current exclusion from the WHO calls to mind the movement of decolonizing global health—where the legacy of the past influences the practices of the present, and where political economy shapes and dictates whose voices are heard.

Tsung Ling Lee is an associate professor of law at the Graduate Institute of Health and Biotechnology and Law, at Taipei Medical University, in Taiwan.


Daniel Fu-Chang Tsai is a professor a the Graduate Institute of Medical Education and Bioethics, at the National Taiwan University College of Medicine, in Taiwan.