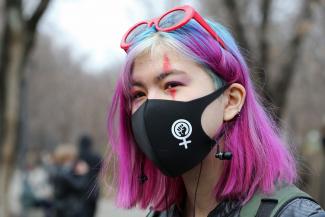 In 1999 on International Women's Day, UN Secretary-General Kofi Annan described violence against women as "perhaps the most shameful human rights violation, and…the most pervasive." Twenty-two years later, violence against women is receiving more political and popular attention but is still in many ways a neglected public health issue.

A year after Annan's declaration, the United Nations established the Millennium Development Goals, which set targets to promote gender equality in education and improve maternal and child health. But reducing violence against women, let alone ending it, was not included, and would not be until the establishment of the Sustainable Development Goals 16 years later. And while we have seen immense progress in reducing deaths of children under five and maternal mortality, there has not been the same progress in eliminating violence against women. Merely measuring violence against women is not sufficient for ending it, but these indicators can help break the silence and stigma surrounding it, both for those who experience violence and all those in power who ignore it.

Addressing violence against women is no easy task. Whereas improvements in child and maternal mortality benefited from gains in women's education and the adoption of interventions like immunizations and having trained professionals present during childbirth, preventing violence requires changing entrenched gender norms and patriarchal systems. Such attitudes are so pervasive that estimates suggest almost 40 percent of young women and men across the globe agree that a husband is justified in beating his wife in certain situations.

The evidence paints a grim picture. More than a third of women across the globe have experienced some form of intimate partner violence or non-partner sexual violence, with a prevalence as high as 70 percent in some locations. And over half of the murders of females in 2017 were committed by intimate partners or family members.

Violence against women is also an important cause of mental, physical, and reproductive health disorders. In some countries, including Australia and South Africa, partner and sexual violence accounts for more of the overall disease burden than other commonly accepted risk factors like smoking, alcohol use, and hypertension. Findings from the 2019 Global Burden of Disease Study show that women who experience intimate partner violence are 1.6 times more likely to acquire HIV and about 1.54 times more likely to suffer from depression. In Brazil, a study showed women who had experienced sexual violence had 5.7 times the all-cause mortality of other women.

Data on violence are sparse, even before the pandemic, and COVID-19 interrupted in-person surveys and interviews, presenting ethical and safety challenges that kept researchers from collecting data on direct experiences of violence. As a result, researchers and advocates have been relying on other data types, such as service calls and emergency department visits, as proxies. Anecdotally, the pandemic has made challenging circumstances worse. As cities and communities around the world went into lockdown and mobility fell, many victims were forced to isolate with their abusers. Calls to domestic violence helplines doubled in Malaysia and Lebanon, and tripled in China, according to the United Nations, while internet searches for domestic violence services in Australia rose to a five-year high.  This pattern is all too familiar: during previous epidemics such as the 2015 West African Ebola outbreak, widespread increases in sexual violence were reported by several countries. COVID-19 is no different.

One new source of information is the COVID-19 Health Services Disruption Survey, which collected data from various countries via smartphone apps in July 2020.  Female respondents first confirmed that they were alone to maintain their safety and encourage more accurate disclosure, and then reported their feelings of safety and access to help services both before and during the pandemic. Of those who said they were unable to access services from a women's help organization, such as a crisis center or domestic violence shelter, around 12 percent cited a pandemic-related reason. But almost three-quarters said the reason was they didn't know where to go or were too far away. Although COVID-19 poses new challenges for women who need help, societies have failed to remove the barriers that women have faced for years.

Now, on International Women's Day 2021, we must commit to do better. The progress made reducing child and maternal mortality proves that durable improvements in global health are achievable, and COVID-19 has shown that we can collectively and quickly mobilize public health resources to fight a crisis. In order to end violence against women, we must attend to it with the same urgency and global attention as we have other public health priorities, from accelerating rigorous data collection and analysis to widespread implementation and enforcement of evidence-based interventions.

In the absence of quality data that allow disaggregation by gender, we utilize data that disaggregate by sex, with the understanding that outcomes for people outside the gender binary are often less equitable than they are for cis women or men.

ACKNOWLEDGEMENTS: We would like to thank Katherine Leach-Kemon, policy translation manager at IHME, for critical review of this post and Rebecca Sirull, an editorial coordinator at IHME, for fact checking.

Cory Spencer is a second-year post-bachelor fellow at the University of Washington's Institute for Health Metrics and Evaluation (IHME).


Jack Cagney is a first-year post-bachelor Fellow on the Gender Equality Metrics team at the University of Washington's Institute for Health Metrics and Evaluation (IHME).