Go to homepage
The United States Has Mommy Issues
Gender

The United States Has Mommy Issues 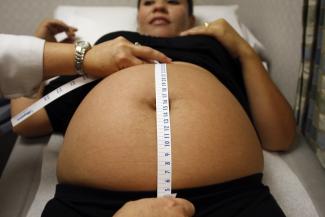 A woman receives a prenatal exam at the Maternity Outreach Mobile in Phoenix, Arizona. REUTERS/Joshua Lott
by Varsha Krish January 17, 2020

Over the past two decades, the United States has gotten richer, yet more mothers are dying in childbirth. Differences between regions have become striking with more women dying in poorer states—predominantly in the South and Southwest—than in historically richer New England and Pacific states. Georgia in particular saw a marked increase in maternal mortality, with nearly eighty women dying in childbirth or during the perinatal period in 2017.

Simply living in a rural area far from a comprehensive medical facility...can drastically increase the risk of dying in childbirth.

In contrast, two countries with nearly identical average incomes per person to Georgia—Denmark and Sweden—had fewer than five deaths. Outside the United States, among high-income countries, only Argentina had more maternal deaths than Georgia did.

This is not to say as income goes up in a state, maternal deaths must go down; the drivers of maternal mortality are varied and complex. Simply living in a rural area far from a comprehensive medical facility or giving birth later in life can drastically increase the risk of dying in childbirth. Despite being one of the richest districts in the country, Washington, DC, consistently saw the highest maternal mortality. This was in part due the large number of women thirty-five and older giving birth.

Women died from childbirth in Georgia in 2017

In contrast, Mississippi, the poorest state in 2017, had relatively high levels of maternal mortality, too, but these deaths were concentrated in women in their mid- to late twenties. Independent from the age of the mother, many southern and southwestern states tended to see higher numbers of deaths, especially in rural regions of the state where the closest hospital may be hours away.

As the United States Congress grapples with how best to fund reproductive health care, it is vital to consider the myriad unique challenges that each state faces. As the evidence suggests, only a comprehensive solution that addresses everything from expanding medical infrastructure in rural regions to investing in further obstetric research would save the most lives.

This article was originally published on December 2, 2019 and republished in January 2020 to coincide with the official launch of Think Global Health.

Varsha Krish is a Data Analyst at the University of Washington's Institute for Health Metrics and Evaluation.