The pandemic will accelerate the development of a "multiplex" world 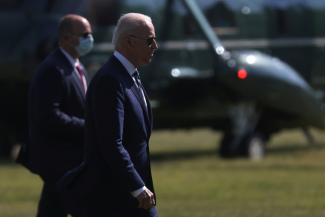 U.S. President Joe Biden arrives at the White House on Marine One helicopter after a day trip to the U.S. Coast Guard Academy. Washington, DC, May 19, 2021. REUTERS/Leah Millis
by Amitav Acharya July 21, 2021

In responding to COVID-19, nations—large and small, democratic and authoritarian—have predictably behaved in similar ways. They have put sovereignty, borders, and their national interests ahead of international cooperation. This phenomenon proved prominent for the United States and China, the two strongest powers, and with small nations, such as Singapore and New Zealand.

Of course, the U.S. and Chinese responses to the pandemic have raised more questions about how the actions of these two countries might affect world order. Contrary to conventional thinking, Chinese and American behavior during the pandemic is not producing a new Cold War or a resurrected liberal international order. Instead, the pandemic is most likely to shift many countries to pursue a different kind of world order—one that reflects multiple centers of authority and capacity in global governance.

The U.S. and Chinese responses to COVID-19 pursued geopolitical goals but with divergent approaches that produced different outcomes. According to Johns Hopkins University, as of July 7, 2021, the United States lost 606,121 lives out of 33,758,758 million cases. China reported 4,848 deaths and 103,948 cases. Even with doubts about its official COVID-19 statistics, China protected its people better than the United States protected the American people. But, for the rest of the world, the more pressing question was whether China, as the country that experienced the first outbreak, and the United States, as a long-standing leader in global health, did enough to protect people in other nations.

Yet, more than a year after WHO declared COVID-19 a pandemic, where is the global standing of these two powers? The pandemic has undercut China's influence, especially in Asia. This region is critical because it is not only the fastest growing part of the world economically but also the primary geopolitical center of gravity that holds the key to China's rise as a great power. John Mearsheimer asserted in the Tragedy of Great Power Politics that a regional sphere of influence is a necessary "stepping stone" for rising powers. In the End of American World Order, I argued that the key to a rising power's global leadership and influence is gaining its own region's trust rather than securing influence through coercion, as Mearsheimer implied. In Asia, Beijing's "trust deficit" increased to 63 percent during 2020 compared with 60.4 percent before the pandemic, measured by the percentage of respondents who had "little confidence" and "no confidence" in China doing "the right thing in the interests of the global community."

Nor did China's successful domestic response establish the supremacy of the "China model" of governance. China is not the only nation to have handled COVID-19 well. Australia, New Zealand, and Singapore also responded effectively, despite different political systems. To be sure, the pandemic response has made Australia look more like China than Great Britain, but China has not made Singapore—itself critical of Western-style, liberal democracy—seethe with jealousy. As Bilahari Kaushikan, a former official of Singapore's Foreign Ministry, said: "Beijing first bungled by trying to cover up, allowing the virus to take hold in China and rapidly spread beyond its borders. But the draconian measures only a Leninist system is capable of taking brought it under control, albeit at great cost, not all of which was borne by China."

No matter how strongly China has complained, people around the world continue to associate the origins of COVID-19 with China. International media have highlighted China’s denials, repression of Chinese citizens for their early warnings, and doubts about Beijing's transparency and cooperation with WHO, which delayed WHO missions to China and undercut the findings of those missions.

In the United States, the Trump administration "chose not to provide leadership during a global crisis," as Thomas Wright put it, and failed to respond effectively to the pandemic at home. The absurdity of President Trump and his loyalists rejecting mask mandates and social distancing in the name of "freedom" became a caricature of American values before the global audience.

President Biden has made efforts to restore U.S. credibility and influence abroad. The administration's Interim National Security Strategic Guidance wants the United States to "lead and sustain a stable and open international system" that features "strong democratic alliances, partnerships, multilateral institutions, and rules." Pundits will recognize these objectives as elements of the liberal international order. The United States' success in developing vaccines, the Biden administration's impressive domestic vaccine campaign, and the administration's vaccine-sharing initiatives bolster U.S. efforts to rejuvenate its vision of a liberal international order.

Yet, the toxic partisanship of U.S. domestic politics dampens cheer and hope. Trump's rejection of the result of the 2020 presidential election, attempts to overturn it through lies and coercion—including the January 6 insurrection—and the prospect of Trump returning to power undermine international respect for the United States. In these circumstances, the Biden administration's revival of the U.S. commitment to multilateralism and cooperation will not restore a U.S.- or Western-dominated world order. The United States faces a long and daunting challenge in restoring faith in its global leadership.

The Pandemic and the Emerging Multiplex World

In short, COVID-19 makes neither the United States nor China appealing to the rest of the world. A sizeable number of countries could, with good reason, take a Shakespearean "plague on both your houses" approach to world order in the wake of the pandemic. A similar thing happened during the Cold War, when many countries rejected both superpower blocs and worked to create alternative forms and mechanisms of international cooperation. Such a "third way" is possible now.

As I have argued elsewhere, international relations before the pandemic exhibited characteristics of "multiplexity"  that neither balance-of-power frameworks (e.g., bipolarity, multipolarity) nor the Western-led liberal international order captured. The emerging "multiplex world" is "not a singular global order, liberal or otherwise, but a complex of crosscutting, if not competing, international orders and globalisms." In governance terms, a multiplex world is "a G-Plus world, featuring established and emerging powers, global and regional institutions and actors, states, social movements, corporations, private foundations, and various kinds of partnerships among them."

Rather than locking the world into a new bipolar structure or resurrecting the liberal international order, the pandemic will accelerate the development of this multiplex world. Recovery from the devastation wrought by COVID-19 requires G-Plus governance and cooperation because neither geopolitics nor U.S. global leadership can manage multiplexity effectively. The failures of China and the United States during the pandemic underscore the need to explore and facilitate alternative configurations of governance authority and capacity in the post-pandemic world order. This imperative requires looking past conventional wisdom about the U.S.-China rivalry and the rhetoric about "America is Back" to find new ideas and possibilities, especially those percolating in the Global South.

Amitav Acharya is Distinguished Professor of International Relations, and the UNESCO Chair in Transnational Challenges and Governance at the School of International Service at American University, in Washington DC.