Go to homepage
From Synergies to Tragedies: 9/11, Terrorism, and Pathogenic Threats
Governance

From Synergies to Tragedies: 9/11, Terrorism, and Pathogenic Threats

After the 9/11 and anthrax attacks, efforts to mesh counterterrorism and public health have failed 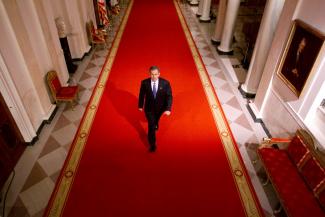 U.S. President George W. Bush walks through the grand foyer at the White House on September 11, 2001, where he would call the 9/11 attacks "an attack on the heart and soul of the world." REUTERS/Win McNamee
by David P. Fidler September 9, 2021

On the twentieth anniversary of 9/11, the United States is reeling from its withdrawal from Afghanistan and is suffering from the COVID-19 pandemic. These events seem unrelated. This perception suggests that efforts to connect counterterrorism and public health strategies after 9/11 and the anthrax attacks that followed a week later have been forgotten.

In the fall of 2001, those kinetic and biological attacks created a surge of interest in integrating public health into the "war on terrorism," and unprecedented political attention and economic resources were devoted to national and global health after 9/11. However, the synergies that were expected to come from linking counterterrorism and public health were not sustained as the two policy areas took different paths that led to the loss of Afghanistan and COVID-19 disaster.

In the new world order that followed the Cold War, the United States became concerned about non-traditional security threats, including extremist, mass-casualty terrorism and emerging infectious diseases. The 1993 attack on the World Trade Center elevated the dangers posed by the "new terrorism," and the HIV/AIDS pandemic heightened awareness of the global threat from deadly diseases. The terrorist and pathogenic threats generated separate policy activities, but the potential that terrorists might use weapons of mass destruction (WMD), including biological agents, created the need to factor public health into counterterrorism strategy.

The chemical terrorism perpetrated in 1995 by Aum Shinrikyo, an apocalyptic cult, and its unsuccessful attempts at using biological weapons, provided real-world incentives to focus public health on preventing, protecting against, and responding to terrorism. In 1996, President Bill Clinton established a national policy to address the national security threat of emerging infectious diseases, including reducing U.S. vulnerabilities to bioterrorism. In its final National Security Strategy (2000), the Clinton administration stressed that defending "the homeland against WMD terrorism has taken on new importance" and that infectious diseases have "become matters of both U.S. national and international security."

The war on terrorism launched after the 9/11 and anthrax attacks sharpened arguments that the U.S. government should create synergies between counterterrorism and public health policies. For example, measures to protect against bioterrorism, such as improving surveillance and stockpiling pharmaceuticals, could also contribute to public health efforts to curb infectious diseases, and vice versa.

The Severe Acute Respiratory Syndrome (SARS) epidemic in 2003 and the global avian influenza H5N1 scare in 2005 provided additional incentives for creating "all hazards" strategies against pathogenic threats. The United States emphasized this approach by supporting the application of the revised International Health Regulations (2005) to outbreaks caused by either naturally occurring infectious diseases or the intentional use of WMD agents. The need to develop "win-win" public health capabilities also informed the U.S. Pandemic and All-Hazards Preparedness Act (2006), which, among other things, strengthened the Strategic National Stockpile, established the Biomedical Advanced Research and Development Authority (BARDA), and required the development of a National Health Security Strategy.

"The quest to connect counterterrorism and public health produced controversy, particularly around the 'securitization' of health policies"

Similarly, international health assistance for low-income countries, especially those in Africa, could, it was argued, mitigate the risk that HIV/AIDS and other diseases could damage state capacity and make these countries recruiting grounds or havens for terrorists. Under this perspective, increases in global health assistance from the Global Fund to Fight AIDS, Tuberculosis, and Malaria (2002) and the President's Emergency Plan for AIDS Relief (PEPFAR) (2003) provided public health and counterterrorism benefits.

But the quest to connect counterterrorism and public health produced controversy, particularly around the "securitization" of health policies. The promised synergies also lacked empirical support or historical evidence because policymakers had never attempted to align these areas before. Nevertheless, the search for synergies proved compelling because the 9/11 and anthrax attacks, combined with the danger of epidemics and pandemics, exposed vulnerabilities that government officials ignored at the country's peril.

Over time, the post-9/11 attempt to weave counterterrorism and public health together lost momentum. The counterterrorism mission informing the 2001 invasion of Afghanistan morphed into nation-building. Regime change rather than the destruction of Al Qaeda motivated the 2003 invasion of Iraq. The rise of insurgencies in both countries forced the United States to shift toward counterinsurgency, a type of armed conflict that U.S. political officials and military forces were not prepared to fight. The insurgents waged kinetic, guerilla warfare in which biological weapons played no role. In U.S. counterinsurgency, health issues became subsumed within the strategy to establish the legitimacy of the Afghan and Iraqi governments in the "hearts and minds" of their national populations.

The public health mission redefined after 9/11 drifted back toward traditional concerns with infectious diseases. The FBI's investigation of the anthrax attacks indicated that an American scientist at a U.S. government laboratory was the culprit rather than foreign terrorists. Concerns about how infectious diseases might affect terrorist interest in weak states faded as global health activities expanded and skepticism about the strategic dangers of failed states increased. HIV/AIDS, SARS, and pandemic influenza riveted attention on problems that required public health action without regard for counterterrorism. "Gain of function" research on dangerous pathogens generated opposition from experts who were worried about the public health threats posed by lab accidents and the security risks created by publishing information that might be useful to terrorists and foreign governments.

By 2014, the gap between counterterrorism and public health was significant when the United States had to confront new terrorism and pathogenic crises. The U.S. withdrawal from Iraq contributed to widespread violence by the so-called Islamic State, necessitating U.S. engagement in another armed conflict against terrorists. In Afghanistan, the much-hyped end of U.S. combat operations obscured the counterinsurgency failure against the Taliban. Drone strikes in "over the horizon" counterterrorism operations generated controversies about targeted killings and civilian casualties that had nothing to do with synergies between public health and counterterrorism.

That same year, the largest Ebola outbreak in history started in West Africa and became a global health disaster. The World Health Organization failed to respond effectively, the United Nations scrambled to send an emergency mission, and a coalition of countries mounted large-scale medical and military efforts. In the aftermath of the crisis, experts paid no attention to the connection between public health and counterterrorism when analyzing the outbreak or making recommendations to improve global health governance.

Just over a decade after the 9/11 and anthrax attacks, these crises signaled that counterterrorism and public health had diverged and, more ominously, that each was in serious trouble. But worse was yet to come.

Twenty years after 9/11, counterterrorism and public health have experienced disasters that call into question whether any progress was made over the past two decades. Afghanistan's fall in August 2021 casts a pall over U.S. counterterrorism policy post-9/11. The extremists who harbored Al-Qaeda before 9/11 control Afghanistan once again. As a result, U.S. worries about terrorism are multiplying, including concerns about Iraq's vulnerability to terrorist violence inspired by the Taliban's victory. Moving forward, the U.S. government will most likely provide intelligence and military assistance to local forces and use "over the horizon" strike capabilities to counter emboldened terrorists. In this context, public health has no relevance to U.S. counterterrorism.

COVID-19 has been a calamity for the United States in 2020-2021. The post-9/11 public health-counterterrorism emphasis on the danger of pathogenic threats did not prepare the nation for COVID-19. The Strategic National Stockpile proved neither much of a stockpile nor a strategic national capability. Partisan politics hamstring the public health impact of vaccines that BARDA helped develop—underscoring that the national unity experienced after 9/11 did not materialize during COVID-19. The pandemic has also resurrected fears about U.S. vulnerability to biological weapons. But, for the moment, such warnings sound more like opportunism than strategic responses to the COVID-19 nightmare.

The Afghanistan and COVID-19 tragedies do not have the visceral impact of the 9/11 and anthrax attacks, but, as was the case after those dark days, the United States must craft new counterterrorism and public health strategies. Unlike twenty years ago, what emerges now will feature far less interest in bringing counterterrorism and public health together in making America safer and more secure.