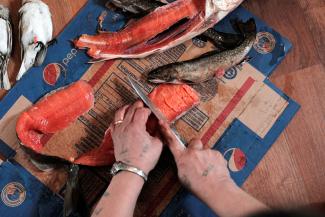 The practice of hunting and fishing for direct personal use, known as subsistence harvesting, is an essential part of Alaskan life. Only 20 percent of the state is accessible by roads, and the majority of the state population has little to no access to a grocery store. For the 120,000 Alaska residents living outside urban areas, most of whom identify as Alaska Natives, the subsistence lifestyle is less a choice than a necessity.

The way in which legislation protects subsistence hunting does not protect those that depend on it the most: the Alaska Native populations

The Laws of Subsistence

Subsistence harvesting is protected under the 1980 Alaska National Interest Lands Conservation Act (ANILCA), which allows residents of Alaska to partake in subsistence fishing and hunting. Yet the way in which legislation protects this practice does not protect those that depend on it the most: the Alaska Native populations.

First, ANILCA makes no special allowances for Alaska Natives, who make up the majority of the non-urban population. Heavy lobbying from non-Native hunting groups resulted in an Alaska Supreme Court ruling that deemed the law's distinction based on resident ethnicity unconstitutional. From then on, ANILCA has been toeing an awkward legal line — while originally intended to protect Native subsistence rights, it cannot forbid non-Natives from harvesting those same resources.

Second, the act only refers to activities conducted on federally defined subsistence lands and does not require participants to be residents on those rural lands. This expands access to the limited natural resources that sustain rural Native populations to urban hunters and fishers who do not live off the products they harvest.

Though small, these details contribute to the fraught landscape of food governance in Alaska. ANILCA and similar laws define where subsistence harvesting can occur, what species can be hunted, when each species' hunting seasons begin and end, and how much of each species' can be consumed. The frequent overlap between state and federal jurisdiction complicates the matter. The web of policies surrounding subsistence harvesting is so convoluted that the Alaska Department of Fish and Game must remind harvesters to consult both federal and state rule booklets "to be apprised of the complete set of hunting or fishing regulations in a particular area."

This rigid set of rules is largely ignorant of the indigenous system of ecosystem management, and has disrupted Alaska Native food sovereignty. The co-management system that has emerged — in which indigenous subsistence is constrained by state and federal guidelines — "did not come from us, we are not managed that way," one Native hunter described.

The Inuit Approach to Food Sovereignty

One coalition of Native groups, the Inuit Circumpolar Council Alaska (ICC), launched the "Alaskan Inuit Food Sovereignty Initiative" in 2019, aiming to reclaim management rights over traditional natural resources and establish food security for their communities. Working with other ICC groups across Canada, Greenland, and Russia, the goal is to enhance food sovereignty across the Inuit Nunaat, or homeland.

As put forth in the ICC's 2020 report, regulations in Alaska "rarely reflect our ways of life." Whereas U.S. government regulations lean toward single-species strategies based on quotas and predetermined seasons, the Inuit approach is better defined as a holistic environmental policy. The goal of establishing Native food sovereignty is not only to preserve and support traditional practices, but to conserve the environment and restore its biodiversity.

The ICC describes a philosophy to food sovereignty in which the subsistence harvest has significance beyond its material value. In the words of Unangax scholar Haliehana Alagum Ayagaa Stepetin, subsistence is "an embodied knowledge [and] way of life." The process of harvesting allows for communities to maintain their traditional diets, supporting their physical and spiritual health, while also continuing their stewardship over ancestral lands.

This stewardship is often inhibited, however, by the fact that Indigenous Knowledge is routinely not incorporated in subsistence regulations. The best-known example of this dates back to the late 1970s, when the International Whaling Commission (IWC) banned the hunt of bowhead whales, critically endangering the food supply of the local Inupiat people.

The IWC based its decision on a U.S. government survey that showed bowhead population numbers as dangerously low. The scientists conducting the survey had assumed the whales avoided ice, and only searched unfrozen waters. The Inupiat people, who reside in Alaska’s North Slope Borough and have hunted the bowhead for generations, knew that to be false.  Bowheads regularly swim under sea ice, using their heads to break it when they rise to the surface to breathe. The IWC eventually overturned the ban, but only after local whalers formed the Alaska Eskimo Whaling Commission (AEWC) to represent the interest of the Indigenous communities. It would take until 1982 for the AEWC to be involved in the population estimate surveys used to determine bowhead whale quotas.

The future of food for Alaska Natives need not be hopeless

The Future of Food in Arctic Alaska

The disconnect between subsistence regulations and Indigenous knowledge is only worsening with climate change.

Walruses are losing their habitat as sea ice melts underneath them, bowhead whales are forgoing their annual migrations due to warming waters, and Arctic char are struggling against deadly algal blooms in their native lakes. The Alaska Native approach, as described by an Inuit hunter, is simple: "the animals adapt and we adapt with them." Moving with the animals, the indigenous approach accommodates the inevitable shifts in seasonality and population size. This flexibility, however, does not exist in the current legal environment around subsistence harvesting.

The future of food for Alaska Natives need not be hopeless. Some first steps include amendments to ANILCA, specifically protecting Native subsistence harvest rights, and increased incorporation of Indigenous Knowledge in scientific research. But ensuring food sovereignty for the Native populations of the Far North will require a fundamental shift in the way subsistence is governed.

Successful co-management is possible, but it crucially depends on the inclusion of and respect for the Native communities. The ICC's initiative calls on the federal and state governments to incorporate Indigenous Knowledge in their policies, both through updates to fixed seasonal regulations and increased representation of Native hunters and trappers in resource management. Ensuring a healthy environment and a steady food supply for Alaska Native communities will require a new form of governance, in which power is shared equitably between the U.S. government and the Indigenous peoples whose lands it regulates.

EDITOR'S NOTE: Visit our "Frontiers" series page to learn more about global health and the deepest realms of the sea, space, the mountains, and more.