We need to face gender gaps in vision loss 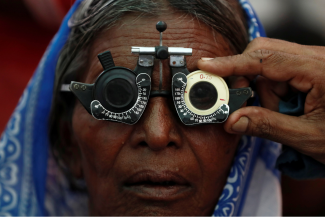 A woman gets her eyes tested at a free eye-care camp in Mumbai, India on December 6, 2019. REUTERS/Francis Mascarenhas
by Jaimie Steinmetz, Paul Briant, Theo Vos February 19, 2021

In 2019, approximately 35 percent of the world's adults over the age of 50 had some difficulty seeing— 637 million people in total. Vision is the primary sense humans use to navigate the world, and poor vision can lead to decreased quality of life, poor mental health, and loss of employment. And women account for 27 percent more of the older adults with vision loss than do men. Why are they suffering a larger share?

The reasons are manifold, from demographics to inequitable health-care access. And despite our growing understanding of them, in some places the disparities are widening. More needs to be done to address the gender gap in this health problem and the impoverishment and decreased quality of life it can cause.

In part, these striking gender differences reflect the fact that women live longer than men, to an age in which vision is more likely to worsen— but this does not account for all of the difference. In the 2019 Global Burden of Disease analysis, led by the Institute for Health Metrics and Evaluation, we found that even after adjusting for age, women still account for 10 percent more of the burden than men.

In 2019, approximately 35 percent of the world's adults over the age of 50 had some difficulty seeing

Inequitable access to health care turns out to be a key driver of the disparities. Relatively inexpensive interventions can prevent vision loss, and women are less likely to access them. The two most common forms of distance vision loss - cataracts and uncorrected refractive errors - can be solved with low cost interventions, and both disproportionately affect women. In 2019, 76 million men versus 101 million women had moderate or worse vision loss from these two avoidable conditions. Again, after accounting for demographics, women still had an 18 percent larger share of the burden of cataracts and a 23 percent larger share of the burden of uncorrected refractive errors compared to men.

Not only have data from visual acuity studies from around the world documented that women have worse vision than men, some studies also explore drivers of gender disparities in vision loss and suggest how these disparities might be addressed. Reducing cost barriers to vision care could help improve women's access to care in cases where unequal pay or unequal opportunities mean that women have fewer resources than men. For example, an analysis of the 2008-2016 United States National Health Interview Survey found that although women were more likely than men to have seen an eye care professional in the past year, they were less likely to be able to afford eyeglasses.

Health system inequities might also play a role. In Sweden, researchers found that women had small but significantly longer waitlist times to receive cataract surgery compared to men regardless of level of vision impairment or income. Encouragingly, between 2005 and 2011, the difference in wait time for men and women decreased. The authors of this study suggested that this could be related to updated governmental policies stipulating a maximum wait time for cataract surgery, a policy that also decreased wait time regardless of gender.

By 2019, women had an 8 percent higher prevalence of blindness compared to men

In addition, governments could provide vision care to women closer to their homes. A national survey from Rwanda assessing the need for primary eye care found that women had a greater need for reading glasses, were more likely to need specialist referral, and more frequently reported untreated eye symptoms such as itchiness or swelling compared to men. The authors of the Rwanda study suggested that training local nurses or healthcare workers in primary eye care, such as treatment of conjunctivitis or refractive error, could particularly benefit women who are caregivers and are more likely to stay close to home.

Unfortunately, the global vision gap between men and women isn’t narrowing – and in some cases it’s actually widening. Globally, men actually had a 3 percent higher prevalence of blindness compared to women in 1990, but by 2019, women had an 8 percent higher prevalence compared to men. One of the drivers of this widening gap is the rate of cataracts, the most common cause of treatable blindness. Globally in 1990, women had 13 percent higher prevalence of blindness from cataract, a difference that increased to 26 percent by 2019. This is particularly driven by East Asia, Southeast Asia, and North Africa and Middle East. Other regions have seen the gap narrow, for example in South Asia and Eastern Europe. It is worth noting that total blindness due to cataract, regardless of gender, has decreased in all world regions from 1990 to 2019. Given cataract surgery is among the most highly effective health interventions in the world, an increasingly large gender disparity in cataract blindness is simply unacceptable.

Addressing vision loss around the world requires us to think about gender disparities. This realization is not new, which makes it even more vexing that gender gaps in vision loss have yet to be eliminated. The World Health Organization highlighted the gender imbalance in access to vision care over a decade ago during the 2009 "World Sight Day." The first paragraph of the more recent 2019 World Health Organization World Report on Vision states that, "the burden of eye conditions and vision impairment is not borne equally: it is often far greater in low-and middle-income countries, among older people and in women, and in rural and disadvantaged communities."  We need to make sure that a decade from now, the 2029 World Report on Vision no longer needs to highlight the gender gap in vision loss because gender equitable policies have eliminated the gap. To get there, governments need to enforce equitable access to vision care, and any initiatives that target avoidable causes of vision loss like refractive error or cataract need to explicitly address gender differences in access to interventions.

This work discusses inequities in sex and gender, which are fundamental drivers of health. They are not mutually exclusive and are often incorrectly used interchangeably. Sex is a biological variable that is often assigned at birth based on karyotype or phenotype of reproductive organs whereas gender is a fluid social construct used to describe roles and behaviors in society. Due to limitations in data collection and the focus on societal barriers to care, data presented here only refer to men and women.

ACKNOWLEDGEMENTS: We would like to thank the following individuals for their contributions: Dr. Bonnielin Swenor, director of the Johns Hopkins Disability Health Research Center, Katherine Leach-Kemon, policy translation manager at IHME, and Kris Krohn, a publications officer at IHME, for critical review of this post; Alton Lu, a researcher at IHME, for assistance with data analysis; and the GBD Vision Loss Expert Group for expert feedback on the estimates described in this piece.

Jaimie Steinmetz is a managing research scientist at the Institute for Health Metrics and Evaluation (IHME) where she works on sensory and neurological disorders for the Global Burden of Disease Study.


Paul Briant is a data specialist at the Institute for Health Metrics and Evaluation (IHME) at the University of Washington.

Addressing women's health in Ukraine and other conflict zones