Six Things to Watch at The World Health Assembly 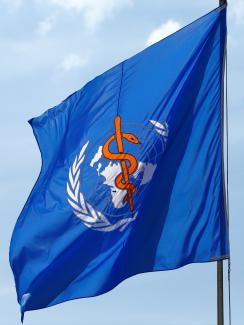 A WHO flag is pictured during the 70th World Health Assembly at the United Nations in Geneva, Switzerland on May 23, 2017. REUTERS/Denis Balibouse
by David P. Fidler May 20, 2021

As the COVID-19 pandemic rages on, the seventy-fourth World Health Assembly convenes from May 24 to June 1 to deliberate at a decisive moment in global health. The decision-making body of the World Health Organization (WHO) will come together virtually as anger about global vaccine access grows, demand for reforms accelerates, and questions about the pandemic's impact on international politics proliferate. Rarely has the assembly met in such challenging but consequential circumstances. Unlike past meetings that produced more documents than meaningful diplomacy, this year's assembly will shape the fight against an ongoing pandemic and the future of global health in international relations.

The theme for the meeting—ending this pandemic, preventing the next—sums up the issues that will dominate the proceedings. In terms of ending the pandemic, the inequities in global access to vaccines will be the most pressing issue. The urgency of the global vaccine access crisis continues to deepen. Frustration with vaccine nationalism and grossly inadequate commitments to share vaccine supplies is mounting. Fear about the portents of the situation in India and about variant strains is spreading. The assembly has no authority or resources to increase global vaccine supplies on its own, but expectations are high that more serious commitments to expand vaccine access must be made in conjunction with the meeting. The lack of such commitments could poison the assembly's deliberations and contribute to a breakdown of cooperation on other issues.

Preparing for the Next Pandemic

The meeting marks the assembly's first opportunity to remake global health governance based on lessons learned during the pandemic with the goal of preventing the next one. Proposals for reform have been pouring forth, including those in the much-anticipated report of the Independent Panel for Pandemic Preparedness and Response. The world will be watching to see if WHO member states agree to improve pandemic prevention, preparedness, and response by authorizing negotiations on a pandemic treaty or revising the International Health Regulations (2005).

Strengthening WHO and Global Health Governance

Also important will be whether member states strengthen WHO's capabilities by increasing assessed contributions, expanding the authority of the director-general and the organization, and overhauling WHO's functions, departments, programs, and staff and leadership rules. Some reform recommendations propose changes outside the WHO. For example, the independent panel is advocating for a Global Health Threats Council created by the UN General Assembly. Will WHO member states express support for such ideas?

The gravity of the pandemic and the tasks before the assembly will intensify scrutiny of the political behavior of WHO member states at the meeting. Geopolitical, ideological, and technological competition between the United States and China has been a defining and disruptive phenomenon during the pandemic. Observers will assess how the U.S.-China rivalry plays out in order to understand the ways in which balance-of-power politics could influence efforts to end the current pandemic and prevent the next one. In this rivalry, the United States and China have also been sensitive to how foreign-policy decisions on the pandemic affect their respective domestic politics. This sensibility will inform the calculations both countries make at the meeting and could limit what the U.S. and Chinese governments accept at the assembly about the pandemic and reform of global health governance.

The meeting also constitutes the first time the assembly will consider the damage the pandemic has inflicted across the global health enterprise. The need to intensify the fight against the pandemic and strengthen pandemic prevention and preparedness for the future could marginalize other issues, including efforts to combat non-communicable diseases, advance universal health coverage, and mitigate social and gender health inequities. At the assembly, how WHO member states handle the pandemic's spillover effects across global health might produce insights for understanding how global health diplomacy and governance change in the wake of the pandemic.

The COVID-19 pandemic did not produce the cooperation long considered vital for an effective response to a global health emergency. At next week's assembly meeting, WHO member states can begin charting a different course for cooperation on the pandemic and its aftermath. Whether the proceedings contribute to such a pivot is one of the more pressing questions that governments and international organizations now confront in international relations.